For some people, working in an office all day, every day, and never getting to work outside is unthinkable. Pierre Deviche is one of those people, so he made it his career to study the biology of animals in their natural habitat. 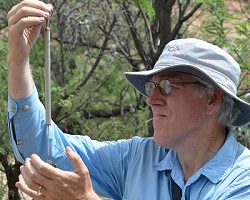 Pierre Deviche does much of his work outside. Here, he is weighing a Rufous-winged sparrow. Image by Shelley Valle.

Deviche's choice in career has taken him to extremes. He has been to one of the coldest places in the US—the the deep forests of Alaska—and one of the hottest—the Sonoran Desert of Arizona.

Deviche’s love of biology can be traced all the way back to his childhood, when he grew up in a small village in Belgium. This village was so small it didn’t even have a grocery store, but it did have lots of natural areas filled with wildlife. Being surrounded by nature sparked Deviche’s interest in biology – an interest that was encouraged by his teacher. With this guidance he learned the skills of observation and how scientists think, using what is often called the scientific method. 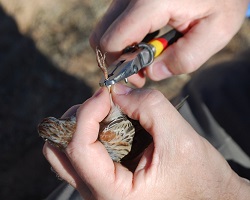 To follow individual birds in the field, researchers place numbered bands around one of the birds' legs. Click for more detail.

Even though he was fond of wildlife, when Deviche chose to pursue a career in biology, he thought of research as being carried out in laboratory experiments on domesticated animals.

During his undergraduate and graduate work at the University of Liege, Belgium, he studied how captive-reared ducks and pigeons act (called behavior), and how their bodies work (called physiology) when it is time to reproduce. At the time, it simply didn’t occur to him to take his research outside.

After graduate school, Deviche got a job at Oregon State University, and began researching the reproductive behavior and physiology of salamanders. Here, he used wild salamanders that he would capture and release for all of his studies. This work taught him the importance of doing research in the wild as well as in the laboratory.

“Working in the wild makes you think about an animal in its natural habitat. It helps you to ask new questions about how a species survives,” he explained.

Days in the Desert 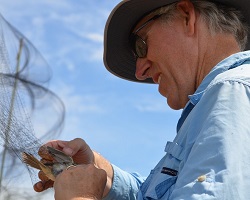 Studying birds in the wild helps Deviche think about their survival in new ways. Here he is removing a Rufous-winged sparrow from a bird net. Image by Shelley Valle.

This desire to ask questions about how a species survives and breeds in its natural habitat drove Deviche to study birds. He was particularly attracted to ASU because there is relatively little known about the adaptations of birds to desert environments. Through his research he is trying to understand how desert birds know when to breed, even though the conditions in the environment change all the time.

Deviche feels lucky to have such an ever-changing, unique job, in which every day he can choose to do research or write about his work, while constantly learning new things and asking new questions that improve our understanding of biology. For him, the best part of his job is “contributing to science, even in small ways. Each tiny contribution can influence how people think or ask questions.”

Image of Rufous-winged sparrow in hand by David Brown. 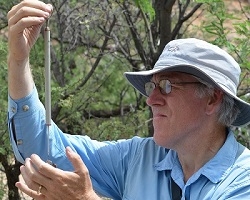 Field studies are important to understanding how the environment affects a species.