Characteristic: a quality that make something similar or different than other things. All birds have wings which are common a characteristic.

Classification: placing living things into similar groups based on their shape, structure, origin and other characteristics.

If you take a look at the first list, you will notice there are more birds than any other kind of animal on the first Red Book list. That is because there were more scientists that studied birds on CREWS than any other type of scientist. Scientists who study birds are called ornithologists. There were also some scientists on CREWS who studied mammals and fish, but not any that studied amphibians or reptiles.

What kinds of things were not on the first Red Book list? Did you notice that there were no plants or insects? The first plant was not put on the list until 1977. Today there are numerous insects on the list including, for example, swallowtail butterflies.  But when the first list was made no one who studied plants or insects was on the team who made the list.

Today the endangered species list has grown to over 1200 animals and almost 800 plants. The animal list includes species from the all five of the original groups. The list has also added new groups like snails, insects, and clams. There are three groups of plants; flowering plants, ferns, and evergreens.  There are many more endangered flowering plants, also called angiosperms, than either of the other two groups.  This is not surprising considering flowering plants make up 90% of plants in the world. 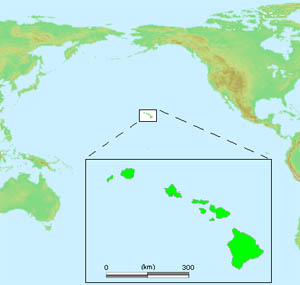 Enlarged view of the Hawaiian Islands.

Of the first 62 endangered species, more can be found only in Hawaii than in any other place in the US. Hawaii is a chain of several small islands in the Pacific Ocean.  Animals from Hawaii often live on only one of the islands.  Because the islands are small there are usually not very many animals of each species. A severe storm or a disease could easily kill all of the animals of one species on one island.  Because that species does not live anywhere else in the world it would become extinct. Hawaii has a lot of these kinds of species with small numbers on only one island. That is why a lot of endangered species from Hawaii were on the first list.

What’s in a Name, Then and Now

Taxonomy is the science of naming and classifying living things. You can learn something about the classification of each of the first endangered species by looking at the scientific names from 1964, provided in parentheses.  Taxonomy, like any science, is constantly changing as scientists discover new evidence. One example is the recent access to genetic information. New information on genes and DNA has caused scientists to reclassify, and in some cases, rename many plants and animals.  Many of species from the first list no longer are called by the same name. If you take a look at the first list you will see how some of them have changed.

Johnny Winston. (2011, January 28). The First to Be Listed. ASU - Ask A Biologist. Retrieved from https://askabiologist.asu.edu/fr/endangered-species-list

Johnny Winston. "The First to Be Listed". ASU - Ask A Biologist. 28 January, 2011. https://askabiologist.asu.edu/fr/endangered-species-list 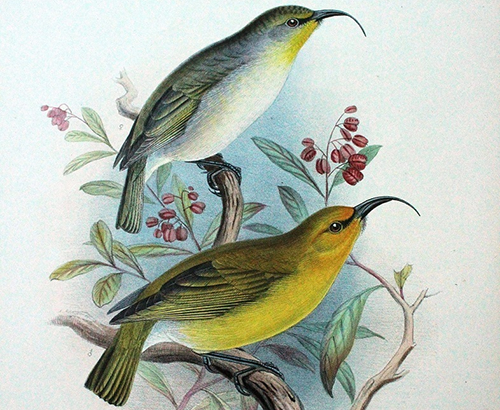 Kaua'i Nukupuu bird from Hawaii was one of the first animals added to the endangered species list.