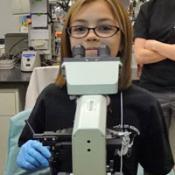 Young scientists, CG Schultz and Jessica Mathews, two of the top winners at the Arizona Science and Engineering Fair talk about their work and interview ASU ecologist Kiona Ogle. Pauline Davies hosts the show as Dr. Biology is exploring the Panama rainforest to bring back fun and exciting stories.

The event was sponsored by the Central Arizona Chapter of the Association for Women in Science.

Pauline Davies:  This is "Ask a Biologist," a program about the living world, and I'm Pauline Davies sitting in for Dr. Biology, who's out of the country exploring some fascinating new projects that he'll talk about on a later show. But today, we're celebrating youngsters who've been given awards by the Association of Women in Science, and it's wonderful to have two of these young people here in the Grassroots Studio with me. Tell me your names.

CG Shultz:  I'm CG Shultz and I'm 11, and my project was proving Pick's Theorem using lattice line polygons. I like doing math because it's one of my favorite subjects in school, and I like doing mental math, as well, so I thought that would be a good project for me.

Pauline:  Great. And we've got Jessica.

Jessica Mathews:  Yes. I'm Jessica Mathews. I am 12 years old. I go to Paragon Science Academy, and my project was on magnets and whether or not temperature, like hot and cold, affects the magnetic force field of the magnet. I took paper clips, small, I believe they were steel, and I laid them out on a flat surface. I took the magnets and I put them in different temperatures and different climates, such as a refrigerator at, say, 32 degrees, and I made sure I checked the temperature. I grazed over the paper clips that were on the flat surface, and I put them in a bowl so I could count them, and I put the magnet back in the refrigerator. I counted them and I recorded it. I did that 10 times for different climates.

Pauline:  Well done! Well, I hope you're going to enjoy your day here at ASU. I think it's going to be really exciting. Also with us is someone the students have been very excited to meet, Dr. Kiona Ogle, a professor and researcher here in the School of Life Sciences at Arizona State University. Welcome, Kiona.

Pauline:  Girls, have you got any questions for Kiona?

CG:  How would you describe yourself as an eco‑ologist?

Kiona:  I consider myself a mathematical ecologist at this plant and ecosystem ecology, and desert ecosystems. A lot of stuff I do combines ecology with mathematics. I actually started out your age or younger, very interested in math, and then I developed that it into interest in biology as a way to apply my math skills.

Pauline:  I want to know, what is an ecologist?

Kiona:  The ecologist studies how organisms, plants and animals, me in particular, plants, interact with their environment, how the environment affects them in terms of their physiology, their growth, their population dynamics.

Jessica:  Yes. With climate change...how does that affect certain plants and animals?

Kiona:  Well, I know a lot more about plants. In the scientific literature regarding animals, there's predictions that certain species may go extinct because of changes in their environment. Like, elevated temperature might affect some species more than others. There's a same idea with plants, too, that it might affect some species more than others, so that it's not very clear how to predict what will happen, in particular. But the idea is that we might see shifts in what we call "species community composition." So some species do a lot better under elevated carbon dioxide, increased temperature, changes in rainfall, and other species may be out‑competed. They don't do as well, and they could potentially go extinct.

But exactly what will happen? We're still not sure. It's unpredictable.

CG:  When you're saying some species are going to go extinct, do you know exactly what species?

Kiona:  No. I can't name particular species, but the idea is that species that are more sensitive to environmental conditions...If you increase the temperature by five or 10 degrees, some species may be harmed more than others because they can't tolerate extreme temperatures. Here in the desert, if it increases by five more degrees then we have summers at 120 degrees. You might see temperature‑sensitive species that might go extinct.

Jessica:  How can you preserve those certain species?

Kiona:  That's a good question. You have to change the environment or you change the DNA, potentially, of the species, such that you might find certain genotypes that do better under different conditions, where other genotypes have the certain combination of DNA might be more susceptible. Within the species, different individuals might be less susceptible to climate change than others, and so you could target those that are hardier as ones that could potentially be conserved, that keep the population viable.

Pauline:  Would you feel bad about changing the DNA of the species?

Kiona:  Maybe I didn't use the correct words. You could change the genetic composition, not by going in there and actually using molecular ways to change it, but the population could shift towards individuals that already are in the population but that do well, so that certain genotypes might do well. You may not actually change the DNA itself.

Pauline:  It would just be natural selection?

Kiona:  Yeah, helped by man. Helped by us.

CG:  Why did you choose to study plant instead of animals?

Kiona:  I find animals very interesting too, but they're very difficult to study, for one thing, because they move around, and you have to have special permits often to study animals. But I also am just fascinated by plants. Especially desert plants. They're very pretty and they...if we didn't have plants, none of us would be alive, because they produce the oxygen that we breathe. And they're very easy to study. Beause they're there, they don't move, you can make all sorts of measurements on them. You can manipulate them very easily.

Pauline:  Do you think the desert is a good place to do what you're doing?

Kiona:  I personally do. I love the desert. [laughter] Other people might find other ecosystems more interesting, but I am particularly interested in how changes in rainfall might affect desert plants and ecosystems. And we're seeing changes in rainfall patterns due to Climate Change. And deserts are very extreme environments in terms of temperature and water availability. So they are a good place to study some of the effects of these extreme climate changes that you might see.

Jessica:  OK. So you're saying you're interested in certain ecosystems such as the desert and plants. Well, have you always been interested? Like when you were a child, did you know you were going to be an ecologist?

Kiona:  No. I thought I might be either a graphic artist, or a math teacher. But I grew up in a very rural area on a farm. So I was always outside, interacting with plants and the environment. And I developed an interest more probably about it in high school. And then in college, I really decided to become an ecologist after about two years in college. It was more a gradual. I realized, "I really like this, so I might as well study it."

Jessica:  I don't know. I'm kind of still deciding, because certain people know what they want to be. But others don't. They take a long time to decide. So I don't know.

Kiona:  What are your favorite subjects?

Jessica:  All of them. I like school a lot, so I'm very interested in math and science, and technology and engineering. I could be an engineer, or I could be a singer or an artist, or anything really.

Pauline:  That's a great ambition. Do you have any idea what sort of mathematician you would like to be? Would you like to study problems in the real world, or would you like to do math for its own sake?

C.G.: Study math in the real world, I guess. Because it sounds [laughter] really fun to do that.

Kiona:  I remember when I was in high school and I took a calculus class. Have you had calculus yet? C.G.: No.

Kiona:  OK. But we had a problem in there that was using calculus methods to figure out when somebody died, based upon the change in their temperature. I thought that was a very interesting problem when I was in high school, and I realized that there's many applications of math to biological problems. You know, real world applications that made it kind of exciting.

C.G.: That sounds really cool what you did in high school.

Pauline:  You'll get there soon enough.

Pauline:  Well I can't let you go without asking about...in fact, I'll ask you all. What do you think about the golf courses all around the Phoenix area? They take up a lot of water, don't they?

Kiona:  They probably do, but they are also using reclaimed water. So I'm torn about them. I don't think they belong in a desert, but then they're using water we don't use elsewhere, really. I don't know.

Pauline:  Right. What about you girls?

Jessica:  Well, personally, I don't like golfing. It's not one of my favorite hobbies. But I think that it does use a lot of water that, yes, we may not use the water, but it could also be used in different areas. So they're good and bad. They have different sides.

Pauline:  So as an ecologist, you've got mixed views?

Kiona:  Yes. I'm more on the side that I wish that there were fewer. But I think we have a lot here in the Valley.

You've been listening to Ask a Biologist and with me have been school girls C.G. Schultz and Jessica Matthews, winners of awards given by the Association of Women in Science. Together we've been talking to environmentalist and ecologist, Dr. Kiona Ogle. The Ask a Biology Podcast is produced on the campus of Arizona State University and is recorded in the Grassroots Studio which is housed in the school of Life Sciences, a division of the College of Liberal Arts and Sciences. And remember, even though our program is not broadcast live, you can still send us your questions about biology using our companion website. The address is, askabiologist.asu.edu, or you can just Google the words, "Ask a Biologist." I'm Pauline Davies. 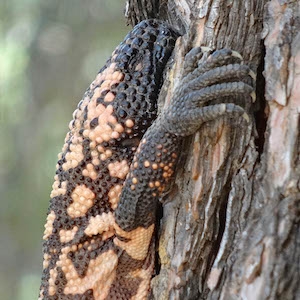