Ribosome: a cellular organelle that is responsible for making proteins. 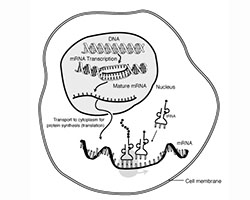 A basic illustration of the processes of transcription and translation. Click for more detail.

In each cell type different genes are active that produce only those proteins that are needed in the specific cell. But how exactly is it possible for the cell to produce a protein out of the recipe on the DNA? Reading a recipe is not enough; protein production involves further steps: transcription and translation.

For creating proteins there is a special organelle in the cell called the ribosome. The ribosome is found in the cytoplasm of the cell. However, the genetic code on the DNA is contained in the nucleus, which is in a different part of the cell. This makes for a bit of a problem, as the ribosome needs the genetic code to make proteins. Taking the DNA into the cytoplasm wouldn't be possible - remember that this is a huge molecule.

To overcome this problem, the cell has found another simple solution: It creates a small copy, or a 'transcript,' of the specific gene, through the copy process of transcription. This copy is a small RNA molecule, called messengerRNA. RNAs are very close relatives of DNA. They consist of nearly the same material. But, whereas DNA is double stranded, RNA is built by only one strand. RNAs are small enough to exit the nucleus through a small pore in the membrane. 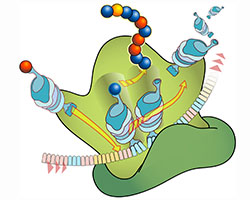 Proteins are produced during translation. Click for more detail.

The actual step of protein production is called translation. This is when the code on the messengerRNA is translated into the small building blocks of proteins – the amino acids. Once moved into the cytoplasm, the instructions on the messengerRNA are read by the ribosome. Following the instructions, the ribosome puts together the amino acids in a specific order to build each protein. Each protein is made as long “pearls on strings,” with amino acids being the pearls.

To make proteins, part of one side of two-stranded DNA is copied to make single-stranded RNA. This strand can then be used in the ribosomes to make proteins.