Biomaterials: a material or substance that has been designed to work with or in living tissues....more

Collaborator: a person who works together with someone else on a project.

Proof: evidence that establishes a fact; (in math) the step-by-step list of known arguments that help you arrive at, or show the truth of, a statement....more

Regenerative medicine: the field of study that focuses on ways to fix, replace, or regrow tissues or other body parts.

Some people know early on that they want to work as college professors. Image by Yinan Chen.

Not everybody gets to end up doing their dream job, but Nick Stephanopoulos stuck with his dream and now gets to teach and learn for a living. His father was a professor of chemical engineering, so he spent his childhood seeing the ins and outs of a professor’s life. He decided this was a great way to make a career out of learning every day, while helping others to do the same.

Despite knowing he wanted to be a professor, it wasn’t until about junior year of high school that Stephanopoulos first took chemistry and biology classes and steered toward science as a career. He considered medical school, but after his first semester at Harvard, he decided to pursue a degree in chemistry. After college, he kept his focus on chemistry, but added in engineering as well, during graduate school. His next step was to focus his research on self-assembling biomaterials. He was very interested in how these could be used in regenerative medicine. 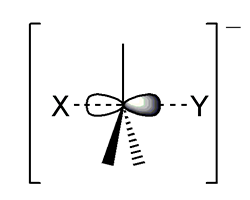 Physical Organic Chemistry is mainly the study of chemical reactions. For example, this diagram is showing a basic reaction where one bond is forming (to connect Y) while another bond breaks (to release X).

Through all the years of school and studying, Stephanopoulos’ favorite class was Physical Organic Chemistry. There, he learned about the reasons chemical reactions happen. The class explained the basics of how energy moves between things, the rules of these reactions, and how to predict them. “It was like seeing behind the veil, like this is why these things happen.” This understanding opened a doorway to a whole new world of information and possibilities. It was an important step for  someone who wanted to learn for a living.

The most difficult class Stephanopoulos took was Multivariable Calculus, which focused on math proofs. Performing mathematical functions was easy for him, but proving why they work was much harder. The grade he received in that class was the lowest he ever got in college, and it was his first semester. According to him, “It made me think I might not be cut out for this.”

But luckily, he didn’t scare easily. Now Stephanopoulos is a professor and researcher at Arizona State University. There, his research continues to focus on combining DNA and proteins to make materials for use in biology, medicine, and energy. Research isn’t all he is responsible for while school is in session, but is close to half of his day-to-day responsibilities. 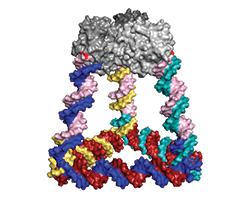 About half of Stephanopoulos' time is used for research, in which he works on building structures out of DNA that might look a bit like this, but at a much smaller scale.

Roughly ¼ of his time is spent on teaching related things (teaching classes, planning lessons, grading, etc.). Up to ¼ more of his time can be taken up by meetings with collaborators, students, and other professors. Besides teaching college classes, Stephanopoulos also mentors graduate students doing research. “I pick which students to work with by seeing which ones I have the best chemistry with.” (Get it?)

Although small compared with his other responsibilities, some time must be spent each day coming up with new puns to unleash on his graduate students. “I like word play. Some people consider it fun, others consider it a PUNishment.”

Bonding with collaborators and students is an important part of his work, but most important may be keeping up with his curiosity. If you’re looking to become a scientist, you should never stop asking questions about how the world works. Learn as much as you can. “At the end of the day, you get to learn for a living, and that’s pretty cool.” 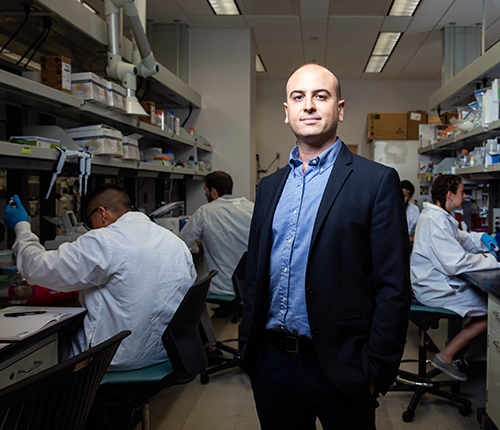 Nicholas Stephanopoulos and his students build nanoscale materials that can be used in the fields of medicine, biology, and energy.