Putting together a puzzle can be fun and challenging. To put together a jigsaw puzzle with 100 pieces, it can help to start with the corner pieces and look at the picture on the box. If you concentrate and put the pieces in, one at a time, you can slowly build the puzzle. Harder puzzles, with 1,000 pieces or more, may take a few hours or even a few days. 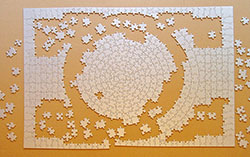 Sequencing a genome is like doing a billion-piece puzzle with no picture to follow. Image by Muns and Schlurcher.

Now imagine putting together a huge puzzle that has over three billion pieces. How long might that take? To make things harder, this puzzle has no corner pieces but is just one long line of code. To make things even more difficult, there is no picture on the box. The only clues are that some of the puzzle pieces overlap. By matching the ends, the puzzle can be made longer a little bit at a time.

That was what it was like to sequence the first human genome. Rather than spending a few days solving the puzzle, scientists spent 13 years putting together all of the pieces. That is a long time. Today, with faster and better computers, sequencing a genome takes a lot less time. Setting out to sequence a genome can be a big challenge and take many months to complete. But how do scientists do it? 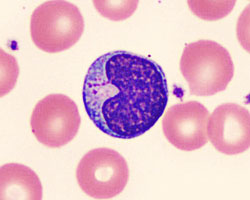 In this purple-stained white blood cell, you can see the membrane around the whole cell and the dark purple nucleus that you must break through to get to the DNA. Image by El*Falaf.

In the kitchen, detergent cleans dishes by attaching itself to grease and fat and pulling it into the water, away from the dishes. Then the water and the grease can be rinsed down the drain. In cells, the detergent does the same thing. It attaches to the fats that hold the membrane together and pulls them away, opening the membrane and letting the DNA out.

Next, by mixing in salt, the DNA clumps together in a group, making it easier to find. The last step in DNA extraction is to mix in the alcohol and water. The DNA will rise to the layer between the water and the alcohol, or might float around in the alcohol. What does it look like? Just like a big pile of snot.

One step scientists take that you might not do in looking at banana DNA is to cut the long strands of DNA into smaller pieces. Scientists use special chemical scissors, called enzymes, to slice and dice DNA. They cut different batches of the same DNA in different spots, so that when they bring them together, some of the DNA strands will overlap.

Once scientists have purified and collected the DNA, they copy it to make enough for their experiments. They use a special machine, called a DNA sequencer, to read all of the DNA letters. The newest, brightest and shiniest DNA sequencing machines can read about 150,000 DNA letters at a time. 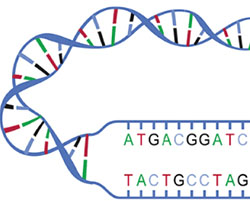 The molecules in DNA are represented by the letters A, T, G, and A, which stand for Adenine, Thymine, Guanine, and Cytosine. Image by OpenStax College.

The machine will translate the chemical code from the DNA into rows of the letters A, C, T, and G. Each of these rows of letters is a piece of the puzzle. Each puzzle piece is a portion of DNA code that is about 150,000 DNA letters long. The completed puzzle could be billions of letters long.

Once all the puzzle pieces are sequenced, it’s time to build the puzzle. By sequencing pieces that overlap, the scientists can use the overlapping DNA letters to figure out where a piece should sit. The first time a genome is sequenced for a living organism, scientists need to sequence much more DNA (in order to find all the overlapping pieces of the puzzle), and use a lot more computer time to analyze the possible combinations of putting the puzzle together.

The first genome created for a species is called a reference genome, which is like creating the picture on the front of the puzzle box. Every Gila monster genome after the first one will be much easier to put together because it will look similar to the reference genome. 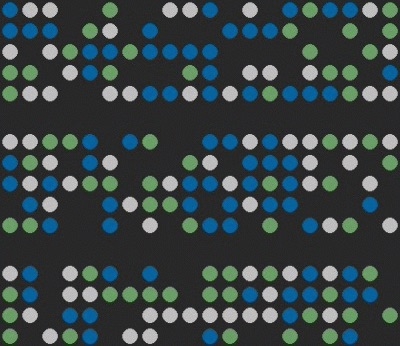 It can be difficult to look at lines and lines of four letters, so there are other ways of representing the genetic code. This way was developed by Gregory Podgorniak.