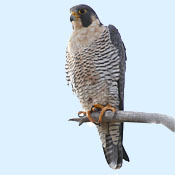 Length: 20 in. (51 cm )
The most cosmopolitan of all bird species, the Peregrine Falcon nests on every continent, except Antarctica, and most islands throughout the world. Its habitat is also broad, and it can be found from Arctic tundra to desert, coastal estuaries and tropical forest. The nest is scraped out of dirt and sand on a cliff ledge, abandoned hawk nest in a tree or even the window sill of tall buildings in cities. It feeds by flying high over its prey and folding its wings in a spectacular controlled fall or stoop reaching speeds up to160 miles per hour 250 kph). It usually hits the prey with its claws folded fist-like. Birds ranging from small kinglets to grouse and geese are the primary food, but it also pursues rabbits, bats, and rodents on occasion. In North America, the species is now recovering from a disastrous decline in the 1940s and 1950s caused by egg shell thinning from insecticides. Captive breeding and reintroductions have been key to this recovery.

The four-digit banding code is PEFA. 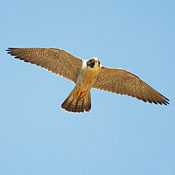 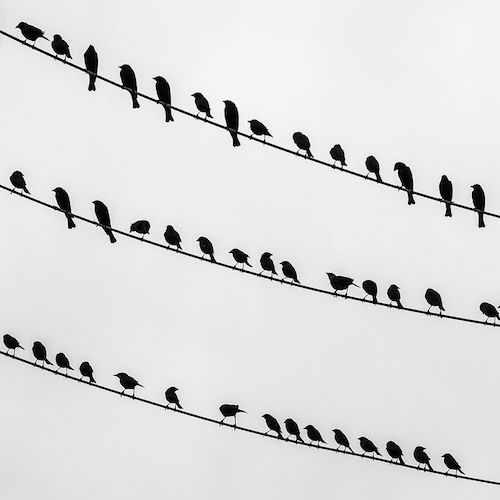