Blurring the Line Between Plants and Animals

Organelle: "little organ". An internal organ of a cell... more

It's a cloudy morning and you are halfway through the race, your feet already hurting from running on the pavement and your energy is fading fast. Suddenly, the clouds clear and the sun breaks through and shines down on your skin. You feel a rush of new energy that powers you through to finish the race. 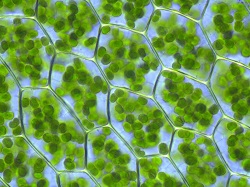 Sunlight can make you feel good, especially on a cold day, but it can't give you energy...right? Animals eat food to gather energy and plants use sunlight to make energy, but wouldn't it be better if organisms could use both energy sources? If you were running out of food you could just sit in the sun to gather energy, saving your food for a rainy day.

Synthetic biology is the the design and creation of artificial biological products (like cells or proteins). Synthetic biologists wanted to figure out how they could make an animal cell that also has chloroplasts (a rare thing to find in nature). In the PLOS ONE article “Towards a Synthetic Chloroplast,” scientists tried to create an organism in the lab that used both food and sunlight to make energy.

The problem is tricky; how would you go about making an animal cell that gets energy from both food and sunlight? We may not have instructions to this puzzle, but there are clues.

When you are exhausted, you can eat and drink for energy. But plants don’t seem to eat anything. Instead, they use sunlight, air, and water to make their own food. The way we get energy is different from plants because plants and animals don't use all of the same organelles for this process. 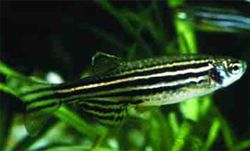 Scientists used zebrafish (shown here), hamsters, and mice to see if they could get bacteria with chloroplasts to live inside of animal cells.

How did scientists figure out a way to combine both organelles in one cell? By learning a little bit about how chloroplasts and mitochondria came to exist in the first place.

The idea is that there were large cells roaming around back then, eating smaller cells for food. Some of these small cells could not be properly broken down and digested by the large cells. Then the small cells could settle down to live within these larger cells. This idea is called endosymbiosis, where endo- means within or inside, and -symbiosis means living together. So endosymbiosis means that two cells are living together, with one inside the other. 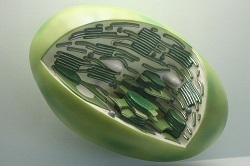 This is a model chloroplast. Chloroplasts were once independent cells. They evolved to live inside of plant cells after they were swallowed by larger cells millions of years ago.

Endosymbiosis is thought to be a rare event in nature, because most cells have defenses against invading cells. But using this idea helped the scientists come up with innovative ways they might be able to get a cell that has mitochondria to accept cyanobacteria, a special type of bacteria that is probably similar to the ancestor of chloroplasts.

Invasion of the Green Aliens!

The body is like a well-protected castle, where foreign invaders are not allowed entry and are killed if they make it inside. So how could you get living bacteria into the body and help it survive? The scientists came up with three different methods of entry for the cyanobacteria.

First, the scientists directly injected the cyanobacteria into the middle of a zebrafish embryo (or fertilized egg at the one-cell stage of development). This allowed the bacteria to avoid the exterior defenses of the embryo cell. For the other two methods, the scientists needed to upgrade the bacterial cells to be able to avoid the defenses of the animal cells. The cells they used were cells from inside the hamster ovary (a female reproductive organ) and mouse immune cells, specifically macrophages. Scientists gave the cyanobacteria special genes that helped them avoid detection by these mammal cells. 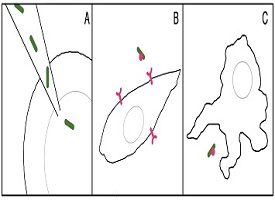 These are drawings of the three methods scientists used to get the cyanobacteria into animal cells. Click for the full story.

The modified bacteria were then either allowed to invade the ovary cells by themselves, or to be swallowed by mouse macrophages, which eat bacteria. The scientists hoped the cyanobacteria would survive and grow within the cells.

Though you may be picturing fish, hamsters, and mice with green skin, the scientists were not able to get quite that far. The cyanobacteria were able to survive and reproduce within the animal cells, but only for around five to 12 days in some of the cells, depending on the method.

The cyanobacteria were able to grow and reproduce in the zebrafish embryos for twelve days. After that, the scientists stopped the experiment, because the molecules that color the fish’s skin blocked the cyanobacteria from gathering sunlight.

Trying to keep cyanobacteria alive in the mammal cells was less successful. In the hamster cells, the modified bacteria were taken into the cell and survived for at least a short period in about 5% of the cells. The cyanobacteria that had been swallowed by the special bacteria-eating cells of the mice were able to replicate (reproduce) in the cell. However, they still started dying after 4 or 5 days.

Even in animals like sea slugs that can keep chloroplasts in their own cells, these cell parts have to be "refilled" from time to time. They do this by eating algae or cyanobacteria. Their digestive cells then hold on to the photosynthetic parts rather than breaking them down. So the short-term survival of cyanobacteria in cells in this experiment isn't too far off from what happens in photosynthesizing animals in the wild.

This short-term progress is enough to give the scientists hope. Maybe with a lot more research, we can one day reach the dream of powering up with chloroplasts in our skin. 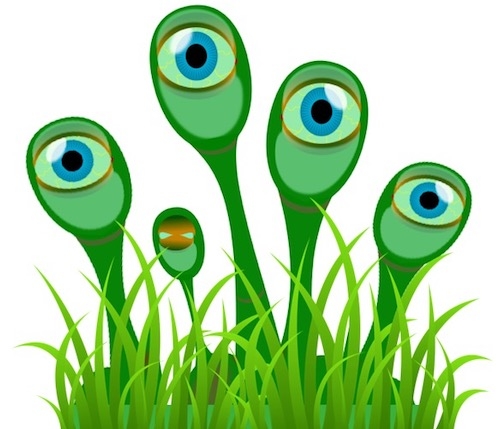 Though we haven't designed any plant-imals yet, scientists are trying to get cells that make energy from sunlight to grow inside of animal cells.

Towards a Synthetic Chloroplast
Learn how to read a scientific article