Give Your Brain a Break

Addiction: over-dependence on something.

Adolescent: a young adult or teenager typically between the ages of 13 and 19.

Brain Connectivity: in the simplest terms, brain connectivity means that different units in the brain are connected or linked to each other so they can communicate. It’s similar to computers, which have parts that need to signal and communicate with each other in order to work.

Once your work is done for the day, do you like to spend time outside, going for walks or playing sports? Or do you like to stay inside to play video games or surf the Internet? A lot of people like to play games online or to browse the web, but for some of them, it may be hard to stop doing these activities. This means that they may have an addiction to playing games or browsing online, which doctors call Internet Addiction Disorder (IAD).

Scientists are studying IAD and their research is showing that teenagers who are always on the Internet are affected by more than just the time sink of games and browsing. The addiction to the Internet has actually changed some patterns in their brain networks, or the routes by which signals travel through the brain. Some researchers that are trying to understand why Internet addictions change brain function share their findings in the PLOS ONE article "Decreased Functional Brain Connectivity in Adolescents with Internet Addiction."

This Korean Internet cafe is a popular place for young people to go on a Friday night and, for some, every night. Image credit Hachimaki via Wikimedia Commons.

Everyone Loves the Internet

Laptops, computers, iPads and tablets are amazing devices. Connect them to the Internet and you can do almost anything online. You can log on to play your favorite games and watch movies, or to get help with project ideas or homework. With so many great activities to do online, it's easy to get caught up in it all. 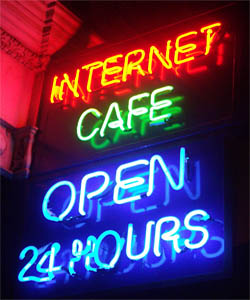 A sign of how addictive the Internet can become: 24 hour Internet cafes. Image credit Justinc via Wikimedia Commons.

There is a growing number of people who are addicted to the Internet, including kids, teenagers, and adults. It’s similar to getting hooked on video games, tobacco, coffee, or food. Signs of Internet addiction can include spending too much time doing a variety of things online, such as browsing, gaming, gambling, or chatting. Internet addicts often seem to live in their own world. They don’t mingle much with others. When they are asked to stop or take a break from the Internet, they may become restless or get into a bad mood. Internet addicts that aren't online may even get upset and start fights with other people. In turn, this can make everyone around them unhappy.

While this may not be good for the social lives of Internet addicts, is it really that bad to be addicted to being online? Yes. Scientists are finding out that Internet addiction is associated with changes in the internal connections or networks inside the brain.

The brain is one of the most important organs in the human body. It controls our thoughts, emotions, speech, senses, movements and actions. In order for all organs to do what they are supposed to do, the connections inside our brain need to work correctly. Lots of illnesses are linked to problems in the brain. For example, doctors study the brain first when someone is depressed or violent, or when they can’t pay attention or are addicted to something.

On the left is an instrument used to perform functional magnetic resonance imaging (fMRI), also called a brain scan. fMRI scans show which parts of the brain are active. After the brain is scanned, an image of the brain can be displayed on the computer, like in the image on the right. Then it can be studied by a doctor or scientist. (right) credit NIH, Image (left) credit Semiconscious via Wikimedia Commons.

To understand the differences between Internet addicts and non-addicts, scientists selected over 20 teenage boys. Based on some tests, they divided the teenage boys into two groups.

Then they performed something called a ‘brain scan’ or fMRI. It’s a way to know if there are any changes or injuries in the brain. They used a machine similar to the one in the picture above. It has a tunnel-like structure that is open on both ends. The boys laid down on a movable table that goes into the tunnel. Then, the machine took some images of the brain and a computer processed them together to produce a 3-D picture of the brain.

Are the Affected Areas Really that Important?

If we took a tour inside the brain we would be able to see that different areas, or brain regions, are busy doing different things. The frontal region controls our thoughts and movements and the ability to speak or make decisions. The parietal area takes care of the senses – hearing, taste, touch, sight, and smell. It is also where the brain processes numbers and where our ability to handle objects is controlled. For example, when you pick up a glass or open a book, you are using the parietal area of your brain.

In Internet addicts, these two areas have trouble connecting to, or signaling, the subcortical region. The subcortical region has three different areas that we call the hippocampus, the putamen, and the globus pallidus. Together they control our memory, as well as voluntary movements like walking, running, or snapping your fingers. These areas also are involved in how we learn.

The broken or dropped connections in these areas might be the reason that Internet addicts show changes in behavior. This is not the first time scientists have seen these types of reduced activity in the brain. Other studies that involved tobacco and gambling addiction showed the same type of changes. What is left to discover is how these changes happen and which comes first – the addiction or the changes to the brain network.

The human brain is more complex than the best computer you can imagine. It has many parts that need to communicate to each other in order to complete all of its different functions.

When working properly, the brain also controls our actions. But these experiments are starting to hint that actions might also control the brain. Previous studies have shown that well-practiced, repeated finger movements are linked to the activation of some brain regions like the putamen. People suffering from Internet addiction type on the keyboard and click the mouse over a very long period of time. In this case, their actions may affect the brain.

So, what does this mean for you? Do you need avoid your favorite computer game and surfing the Internet? No, you can still enjoy them. But you should try to include other activities to balance out your online time. Get away from the computer and the Internet and enjoy a bike ride, a game of cards, or some other fun activity. Just make sure you give your brain a break.

Wonder if you or someone you know might be addicted to the Internet? We did some searching on the Web and found several online quizzes for Internet addiction. Here is one from the Center for Internet Addiction you might want to try.

Meenakshi Balakrishnan. (2013, May 26). Give Your Brain a Break. ASU - Ask A Biologist. Retrieved February 1, 2023 from https://askabiologist.asu.edu/plosable/give-your-brain-break

Meenakshi Balakrishnan. "Give Your Brain a Break". ASU - Ask A Biologist. 26 May, 2013. https://askabiologist.asu.edu/plosable/give-your-brain-break 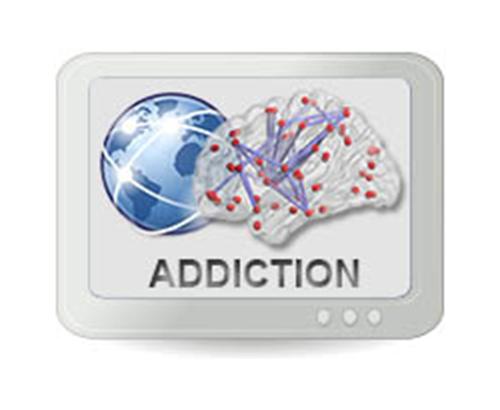 Too much of anything can be bad for you. When you spend too much time on the Internet, you might alter the way your brain works.