Dr. Biology pops into the laboratory of biologist Jon Harrison to see what's happening with his giant beetles. It's not long before he gets a lesson on how insects breathe differently than humans. He also takes a quick journey back 300 million years - when these crawling and flying animals were super-sized. You can see one of these modern day creatures exercising on a cool beetle flightmill. It is kind of a treadmill for flying animals. Below we have the story on the red light and also the math used to calculate how far and fast these beetles fly.

You might think the red light in the video was added to make the lab look more scientific. It's really a normal feature of the room. As part of the fire safety code, a light needs to be left on in the room at all times. The beetles are also kept in the room and need a normal light cycle where they have a dark period. The answer was to place a red bulb in the safety light. Most insects including the beetles cannot see red light. This allows them to have a period of time during each day when the white lights are off and for the beetles dark.

How can you figure out how far and how fast a beetle flies on their custom treadmill? There are two ways. One would be to draw out a line of the imaginary circle the beetle flies.

The other way is to use mathematics. This is much easier and more practical than dealing with imaginary circles. To setup our calculation we need to learn about Pi (pie). Not the pie you eat, but the mathematical constant that can be used to figure out the circumference of a circle. It is also used for other calculations, but for this activity we will be figuring out the diameter of the imaginary circle the beetle flies. After we know the circumference of the circle we can find out how far and how fast the beetle travels.

We call Pi a constant because it represents the ratio of a circle's circumference to its diameter. It is also an irrational number. This means it can be calculated out to an infinite number of decimals and never repeats.

For distance we total the number of revolutions.

Now you try it

Thanks to Dr. C. Jaco Klok for sharing the beetle mathematics activity. 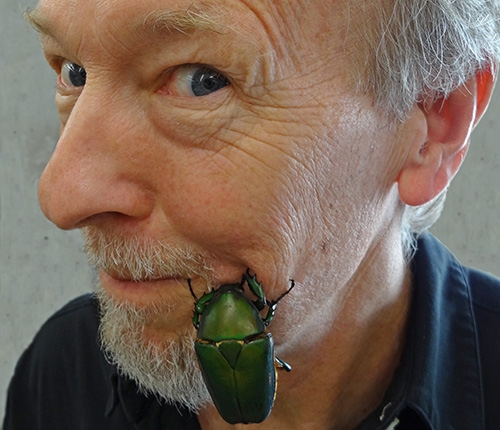 You can read more about Jon Harrison and his research with insects in the companion article - The Interest of Insects.