Diffuse: to spread out.

Respiratory: process related to respiration (the action of breathing). The respiratory system is responsible for movement of gases in and out of animals... more

How Do Insects Breathe?

A visit to Jon Harrison's laboratory is one you will never forget. The collection of large insects you will find is amazing. You see some of them are in their plastic homes while others exercise on their own flightmill. This is kind of a treadmill of flying insects.

So How Big Can Insects Grow?

Harrison says that the amount of available oxygen limits insect body size because of how the creatures’ respiratory systems are made. Instead of lungs, insects breathe with a network of tiny tubes called tracheae. Air enters the tubes through a row of holes along an insect’s abdomen. The air then diffuses down the blind-ended tracheae. Since the biggest bugs have the longest tracheae, they should need the most oxygen to be able to breathe. Only when environmental oxygen is high will it push to the deepest reaches of the tracheae.

Getting Oxygen to Insect Cells

The distance oxygen can travel down the tracheae depends on its concentration in the air. If atmospheric oxygen is doubled, theory says that it should be able to make it twice as far. According to Graham and Dudley, escalating Paleozoic oxygen levels may have helped speed oxygen transport in the longer tracheae of bigger insects. The environment itself could have opened the respiratory door for Paleozoic insects, allowing giant species to evolve.

Large insects may require high concentrations of oxygen to allow it to reach into their bigger bodies.

Insects do not breathe the same way that we do. Oxygen travels to insect tissues through tiny openings in the body walls called spiracles, and then through tiny blind-ended, air-filled tubes called tracheae. For a given tube diameter and temperature, gas molecules diffuse over distance at a rate proportional to the source concentration.

In other words, air that contains more oxygen allows the minimum amount needed for metabolism to reach farther into the insect’s tracheae. Some insects can increase oxygen delivery by a mechanical pumping action of their bodies. Humans and other vertebrates are less likely to be affected by atmospheric oxygen concentration, since oxygen is delivered by blood that is pumped through the tissues. 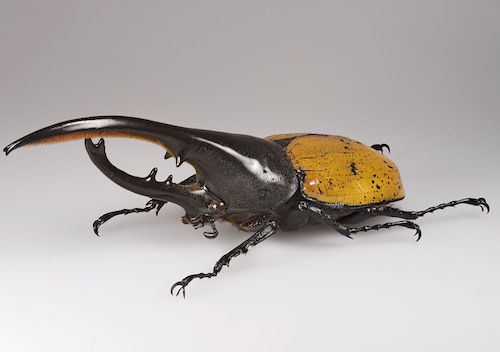 Modern day giant. Not anywhere as large as prehistoric insects, but Hercules beetle, Dynastes hercules, can be as large as 17 cm or 6.5 inches.