Is this a fantastic headline, or could we see giant insects today? It's not likely, but for years movies have used these mythical images to scare and entertain millions. These enormous insects depicted in bad B movies exist mostly in the realm of science fiction. However, insects of giant proportions really did exist 300 million years ago. They were not as big as dump trucks, but some were many times greater in size than those of their modern relatives. How do we know?

Fossils hold the evidence. Scientists know that dragonflies with wing spans as wide as a hawk’s and cockroaches big enough to take on house cats lived during the Paleozoic era (245-570 million years ago). At the same time, mammoth millipedes longer than a human leg skittered across prehistoric soil. Hundreds of different huge species evolved during the late Paleozoic era. All of this was happening just when the first dinosaurs appeared. Soon after the giant insects disappeared.

Mystery of the Disappearing Bugs

These ancient giant insects fascinate Jon Harrison. A physiologist and professor of biology at Arizona State University. Harrison wants to know why giant insects evolved, and why they disappeared. The answer may lie in how insects breathe. Harrison and his laboratory are busy studying how the breathing of modern insects affects their body size. They are finding that, because of the way insects are built, higher oxygen levels usually means bigger insects! 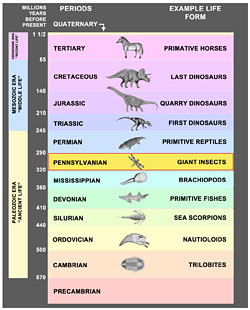 Before the dinosaurs, giant insects ruled the world more than 300 million years ago. Click image to view larger.

Recent geologic findings indicate that there was a “pulse” in the concentration of environmental oxygen during the Paleozoic era. In other words, there was much more oxygen in the atmosphere 300 million years ago than there is today. During this period, the oxygen concentration in the air reached 35 percent, almost double the present level of 21 percent.

Interestingly, the rise and fall of atmospheric oxygen also coincided with the evolution and extinction of giant insects. Harrison and other biologists propose that this was more than just coincidence. They hypothesize that high oxygen levels could explain the existence of giant species. The extinction of winged monsters and ginormous beetles after 100 million years may also be the result of decreased levels of oxygen that happened at the same time.

What Else Could Explain the Missing Giants?

Scientists often consider several explanations for a puzzling observation like super-sized insects. Harrison points out that while there is good evidence to support the hypothesis that a prehistoric pulse in oxygen caused evolution of giant insect, there is no direct evidence. There are no living giant insects, or fossils of their tracheae. As a result, biologists are forced to study the next best thing: related insects still alive and crawling and flying today. A convincing test of the oxygen pulse hypothesis will depend on evidence from studies on many of these insects. 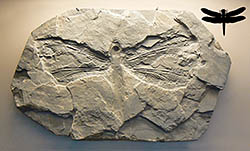 Scientists have found fossil records of giant insects related to dragonflies. This is a cast of a fossil Meganeuridae. This insect genus lived 300 million years ago and could have wingspans up to 2 feet. The image in the upper right is the size of a modern day dragonfly. Click to view larger.

This takes time. Harrison and his students are contributing to the effort. “Our work is important because it is the first research I am aware of to experimentally test this hypothesis,” he says. But until he and others produce the necessary data, Harrison’s good scientific sense requires him to consider other possible explanations. “There has been a lot of ‘gigantism gone extinct’ in other groups,” he explains. Some well-known examples are the dinosaurs and the elephant-like mastodons of the Pleistocene era. In these groups, evolution has not been linked to atmospheric oxygen levels, Harrison explains. “Obviously, there are other environmental or ecological reasons for gigantism and gigantism gone extinct,” he adds.

Paleozoic insects may have been able to use other mechanisms, such as respiratory pumps, to increase airflow in their tracheae. If so, giant species could have maximized their ability to breathe even in low oxygen environments. Ecological factors also could explain the pattern of prehistoric gigantism. For example, some insect biologists favor the idea that giant Paleozoic insects were successful because they were less likely to be eaten. Their massive bodies might have made them more powerful fighters, or made them too big to be considered feasible prey. Another possible explanation is that increases in ecological diversity may have simply diversified body size options for insects. Being “giant” was just one of the alternatives.

This story was originally published in ASU Research Magazine - Fall 1991 issue. Some content has been updated and additional images developed for Ask A Biologist. Meganeuridae fossil image from Wikimedia. 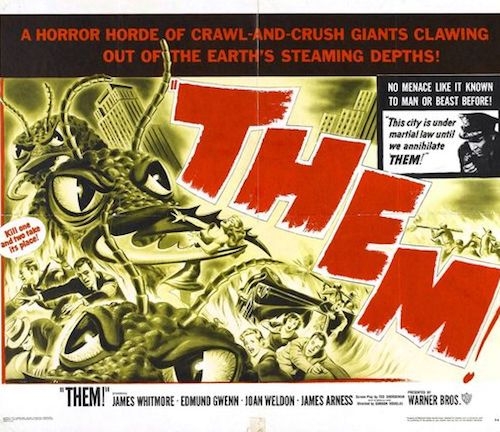 Them - the 1954 movie about giant ants battling humans in the New Mexico desert. Science fiction today, but 300 million years ago giant insects did exist.