In a classification, a taxon is a group, and the smallest taxon is the species. Usually, only members of the same species can mate with each other and produce young—or seeds, in the case of plants. There are some exceptions to this rule, but often the young of mixed species cannot reproduce or do not survive well in the wild. 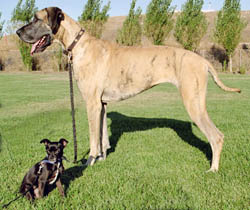 Chihuahua and Great Dane look different but are still the same species.

Since the time of Linnaeus, scientists have attempted to group organisms into higher taxa, or groups.  More than one genus (genera, plural) is put in the same family.  Similar families are put in the same order.  Related orders are put in the same class, and related classes are put in the same division (plants) or phylum (animals).  A number of divisions make up the plant kingdom, and many phyla make up the animal kingdom.  In addition, modern taxonomy recognizes three more kingdoms:  fungi (molds, mushrooms, and their relatives); microorganisms, such as bacteria; and protists, the one-celled organisms you can find in soil and water.

Some organisms don’t look alike but are still members of the same species.  Canis familiaris, our domesticated dog, can be as small as a Chihuahua or as large as a Great Dane. Human experiments in breeding dogs have given us more than 100 varieties. Dogs are classified as follows:

Phylum—Chordata (presence of a nerve cord along the back)

Other members of the dog family are the fox, the wolf, Canis lupus, and the coyote, Canis latrans. The wolf and coyote are members of the same genus; foxes belong to different genera.

Until recently, scientists did not have access to genetic information and an understanding of DNA. They had to make guesses about what plants or animals are related to each other and belong together. Sometimes their guesses were incorrect. Today, we have much more information about all living organisms and their relationships, and we can correct some of the mistakes in classification that were made in the past. 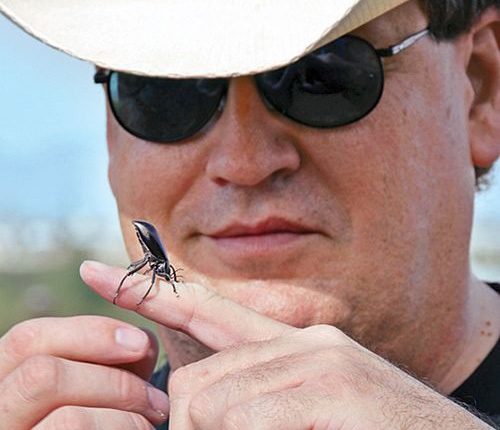