Natural Science: science such as biology, chemistry, and physics that is based mainly on factual research.

Philosophy: a love or pursuit of wisdom.

Aristotle was a Greek teacher who lived more than two thousand years ago. To be exact, he lived from 384 to 322 B.C.E. (before the common era). Do those dates look backward to you? You need to remember that before Christ, dates count down to his birth and afterwards they count up. So if you do the math, 384 years plus our current date, you will find that if Aristotle was still alive he would be more than 2,398 years old!

Aristotle is best known for his work in philosophy. However, he also studied, experimented, and wrote many textbooks about the natural sciences. One of these books was called Historia Animalium or The History of Animals. Aristotle described the mouth parts of a sea urchin in this book. Below is the translated text.

"In reality the mouth-apparatus of the urchin is continuous from one end to the other, but to outward appearance it is not so, but looks like a horn lantern with the panes of horn left out."

Drawing of Aristotle's Lantern that forms the mouth parts of a sea urchin.

As other scientists later studied and wrote about the urchin, the term Aristotle's lantern was used. This holds true thousands of years later.

Why a horn lantern? As it turns out, these lanterns were not shaped like a horn. Instead, they used thin pieces of horn on each of the lantern's sides. The pieces, also called panes, were thin enough to allow the light from the lantern to shine through, but protected the candle from being blown out by such things as wind. Horn lanterns have been made for many centuries and in many shapes. During Aristotle's life, horn lanterns had five sides. This made for a good comparison when writing about the sea urchin. 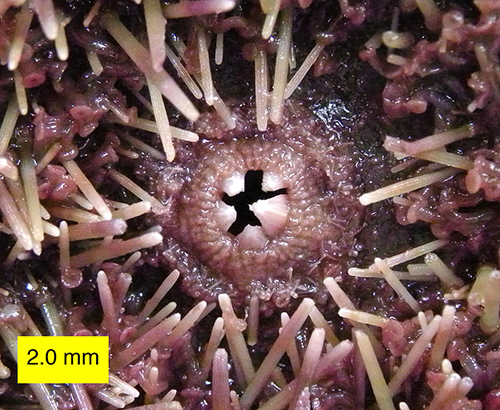 View of the mouth of a sea urchin (Strongylocentrotus purpuratus) showing the teeth of the Aristotle's lantern.