Incubate: to sit on an egg to keep it warm until the offspring inside is big enough to hatch. 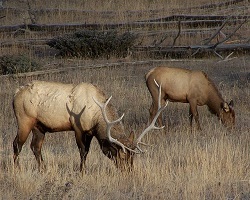 It's easy to see for a long distance on a grassland - as long as you're taller than the grass. Unfortunately, this means that for big animals, hiding from predators that would like to eat them isn’t easy. Large grassland herbivores have two main tactics to keep safe: they join herds and they are very, very fast.

Herds are groups of animals that can range in size from a handful of individuals to thousands. Being in a herd provides an animal some safety. With many eyes to keep watch, a predator is less likely to successfully sneak up on that animal, and the herd may help defend the animal if it's attacked. 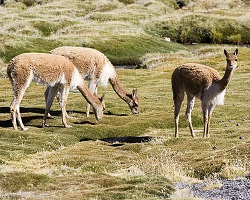 These vicuñas are adapted to escape predators. Click for more detail.

Because herds make it harder for a predator to get a meal, they're always on the lookout for lone animals. Getting separated from the herd can mean death.

When a herd spots danger, whether it's a fire or a predator, it has to outrun it. Many herd animals are able to run within a few hours of birth and have special adaptations for speed.

To be fast, an animal can either take big steps or it can move its legs very fast. Herd animals do both. Many are adapted to stand on the tips of their toes to lengthen their stride. 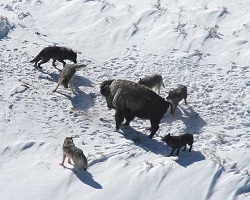 A pack of wolves in the United States' Yellowstone National Park have cornered a lone bison on a snowy grassland. Image by Doug Smith.

These animals also have stick-like legs and small feet with few toes, which lightens the limbs so they can move them faster. Of course, this isn't the only way to clear a lot of ground. Kangaroos, for instance, just jump.

Some predators have formed groups of their own. A pack of wolves might be able to chase a single animal away from its herd and kill it because they can work together. Since herd animals have become so fast, the predators that eat them need their own special adaptations to catch up. Some have become great sprinters, able to outrun their prey for short periods. Others lie in wait and pounce at just the right moment when the unwary herd passes by. 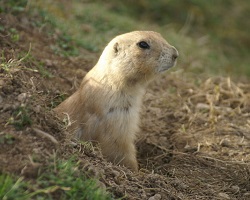 The prairie dog is a burrower native to North American grasslands. Click for more detail.

You may be wondering whether small animals have as much trouble protecting themselves from predators as herd animals. Can't a little animal simply hide in the grass? Well, yes, but predators have keen ears and noses and it's just as hard to see a predator coming as it is for them to see you.

For real safety, many small grassland animals move underground into their burrows. Burrows provide a safe place to raise young and hide from predators, fire and bad weather. They also provide a place to store food for the future. Some burrowing animals even dig to find their food, which is often insects, worms or plant roots.

All sorts of grassland animals dig burrows, including insects, small mammals, reptiles like tortoises, and even a few birds. Even more animals use existing burrows that they might modify a bit. But even in burrows, some predators, like snakes, can find small animals.

Taking to the Air 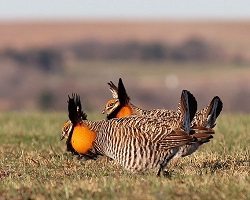 Birds on the grasslands have the same problem as any other animal: how can they stay alive in a land with few trees when other animals want to have them for dinner?

Birds have a great advantage, though. They can fly. This can keep them safe from predators, unless they run into a raptor or owl.

The most dangerous time for a grassland bird is the time it spends on the ground. However, there aren’t very many trees in grasslands, so most grassland birds must come to the ground to sleep, to eat, and to mate and raise the next generation. 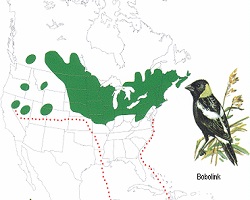 Some grasslands have cold winters, which cause birds to migrate. Click for more detail.

Because grasslands have no trees, it's not easy for parents to find a safe place to keep their babies. Grassland birds are experts at hiding their nests in the grass, where they lay eggs that must be incubated safely for at least a week or two before hatching.
Once eggs are laid, both the parents and offspring are at great risk from predators because most chicks stay in their nests and depend on their parents for food until they're ready to fly. Some very developed young can run alongside their mothers as soon as they hatch.
Images via Wikimedia. Secretary bird image via Keven Law. 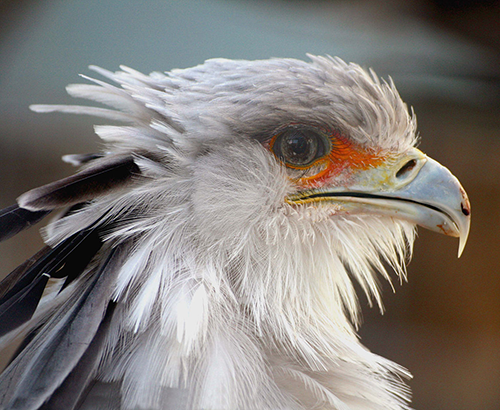 Many predatory birds live in grasslands, like this secretary bird from Africa.