Conservationist: a person who works to protect, restore, and maintain natural areas. 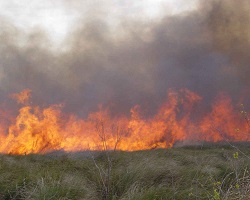 This fire looks pretty wild, but it's a carefully planned fire. Click for more detail.

Most of us are taught at a young age that if you see a fire anywhere, you must call in fire-fighters to put it out.  In grasslands, fires are natural and are actually an important part of the biome. Without fire, many grasslands wouldn't even exist.

Wildfires occur often in grasslands. Animals flee fires.  Small animals can climb underground into their burrows to stay safe, but grasses and other plants common to grasslands can't run away. Instead, they are specially adapted to survive fire. Just as a small animal can be safe in an underground burrow, the parts of the plant that are underground are less likely to burn.

Grassland plants have evolved so that as long as their roots survive, they can grow back after a fire very quickly. Trees and other plants not adapted to fire cannot grow back quickly, if they even survive. As a result, fire helps keep the grasslands from being overgrown by bushes and trees and turning into a forest.

Grazed to the Ground 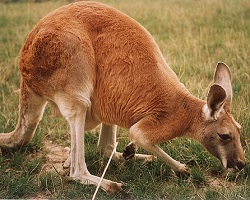 This Australian red kangaroo is grazing. Click for more detail.

Grasslands are full of herds of hungry herbivores. These herbivores are hard on plants, but they can be a powerful force in making an area a grassland and keeping trees from taking it over.

You see, grasses and other grassland plants have special adaptations to allow them to survive heavy grazing. Unlike many plants, grass can survive being grazed all the way to the ground.

A tree that sprouts in a grassland will have a short life if it encounters deer that like to nibble young shoots, but the patch of grass next to it, which the deer also eats, will grow back the following week. Grass is also a difficult food to eat, especially compared to the tender buds of a baby tree. Some grasses are so tough that you can cut your hand on them if you're not careful.

If a deer has a choice between a tender young tree (called a sapling) and a bunch of chewy grass, it'll probably pick the tree. This means herbivores can play a big role in keeping grasslands free of shrubs and trees.

People also create grasslands. In some parts of the world, like New Guinea, the impact of humans burning an area every dry season for thousands of years has created fields. They use these fields to grow crops in the middle of a tropical forest. 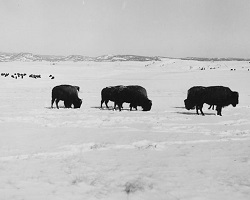 If these bison dig down, they can find grass that is still living under the snow. Image by U.S. National Archives and Records Administration.

In temperate grasslands, grasses and other plants must survive cold frozen winters and hot, dry summer droughts. Many grasses can live quite happily under a heavy layer of snow.

During a cold winter, grasses become dormant, which means that they don't grow new leaves, seeds or roots until spring comes with warmer temperatures and fresh rain. Many grasses are also specially adapted to handle heat and droughts without much water. 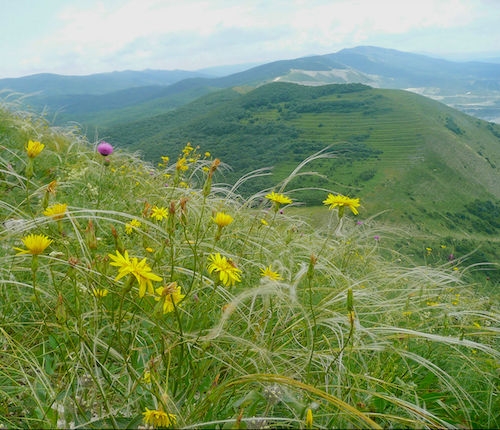 Grasslands are found in a variety of environments, including high up on the tops of mountains, like this Russian mountain steppe.