A Game of Strategy and Fat

Adaptive: something that exists because it evolved for a beneficial reason under certain circumstances.

Famine: a period of time when food is especially scarce, or difficult to find.

Subconscious: a word describing the part of the mind or body that is not aware of your thoughts, but still affects your actions and feelings....more

The sun is high and the landscape around you is scorched by the dazzling heat. Sand dunes fly by on either side as you zoom down the dusty road. You have been driving for days in the Dakar Rally, one of the world's longest and most brutal auto races, originally held from Paris, France to Dakar, Senegal. There's nothing in sight ahead or behind you, for as far as you can see. A quick glance at the fuel gauge shows that you have a third of a tank of gas left. 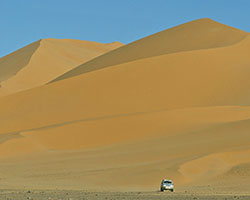 The Dakar Rally is a race now held in South America that takes its racers over difficult habitat for hundreds of miles. Click to enlarge.

The important question hangs in your mind: when should you stop to refuel? Every time you slow down and search for a place to fill up your tank, your competitors will gain on you. But if you run out of gasoline in the middle of nowhere, you'll lose even more time. You drum your fingers on the steering wheel, deep in thought. For the last hundred miles, there have been almost no places to stop. Right now you would jump at any opportunity to fill up. Back when you were cruising through the farmlands, you would have waited much longer—almost to the point where your tank was empty—before pulling off to one of the many gas stations.

It's a dangerous game you play. Each decision must balance the risks and rewards, and each decision could mean success or failure. Surprisingly, scientists think that our own bodies, unknown to us, might be playing a similar game with energy in the EMPH article, “An adaptive response to uncertainty can lead to weight gain during dieting attempts.”

Although stopping for gasoline in a long-distance automobile race and putting yourself on a diet may not seem related, there are more similarities than you might think. 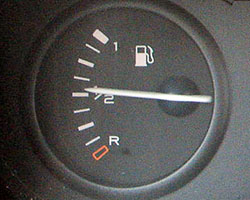 If gas stations are scarce, you are more likely to try to keep your tank filled. Could our bodies deal with fat the same way?

People often go on diets—restricting the food they eat to certain ingredients, to certain amounts—to lose weight and fat. Often, once people lose enough fat, they decide they’re happy with their new weight and begin eating normally again. Very commonly, they gain back all the weight they lost and then start dieting a second time to lose it again. (Scientist call this “yo-yo dieting” because your weight goes down and up, down and up like a yo-yo on a string.) In fact, attempts to diet often end up with people actually gaining more weight in the long run—the exact opposite of what they wanted.

Why does this happen? Researchers have proposed many ideas. Maybe our ability to control our eating ‘malfunctions.’ Or perhaps we are just around too many fatty, unhealthy foods, and we are overwhelmed by options. However, some scientists think our bodies may be playing a subconcsious game of fuel strategy, like drivers in the Dakar Rally.

Fat gets a bad rap. When most people mention the word “fat,” they usually intend to get rid of it. But fat is a useful way to store energy. Back before humans began farming, finding food was much less predictable. Fat allowed us to store extra fuel from one big food opportunity to the next, much like filling up a gas tank. 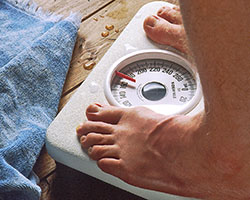 Our bodies may put on weight to deal with periods when food is scarce.

A constant, dependable supply of food is something many of us take for granted in the modern world. Though our lifestyles have changed, our bodies have stayed fairly similar. Perhaps, researchers thought, human bodies are acting like they’re still in an ancient, high-stakes game.

Maybe when you choose to go on a diet, your body feels like it has entered a food desert. Although you know there’s plenty of food around, your body may push you to eat and store anything you can find. This may mean that limiting your food intake can increase your cravings and, thus, the amount of food you end up eating.

Researchers wanted to see whether dieting problems we see in the real world could be a result of our subconscious bodies working to get more fuel after periods when we decrease food intake. To test these ideas, they decided to construct their own form of game, called a model.

In the same way that a model airplane is a smaller, simpler, more manageable version of a real working airplane, their scientific model was a simplified version of the game our bodies might be playing with storing fat. The model was made to simulate a situation in which humans did not have dependable food supplies. If the best strategies to “win” this game or model were strategies that would also cause us to gain weight in the modern era, maybe a similar thing is happening in real life!

Rules of the Fuel Game

The scientists ran the entire game using computers. Each player could store food energy as fat, and their fat supplies slowly went down as the game went on. Time that the players spent looking for food would be time that they couldn’t spend competing for points. But if they ran out of stored energy—fat—then they were out of the game. 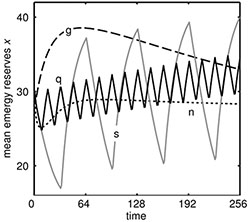 This graph shows how the energy reserves (the stored “fat”) of successful players changed as the games continued. Click for more detail.

One version represented the modern world in which good food was always available and easy to get. Another version represented what your stomach might experience if you were dieting: long periods with little food, mixed with times where food availability was normal. How might the best strategies for winning in these different games be similar or different?

And the Winners Are…

The researchers found that players with winning strategies foraged for food more often when food was scarce, just like our Dakar racer did with gasoline. Additionally, when they were near starvation, they also foraged more (not too surprising).

However, things were different in the version of that game that mimicked human dieting. During the periods of little food (similar to when people diet), every player’s energy stores (fat) naturally went down. But once food became plentiful again (after a diet ends), the amount of food that the successful players ate skyrocketed! They ended stockpiling even more fat than the players in the version of the game where food was super abundant. The players in the dieting game were twice as motivated to add more fat. 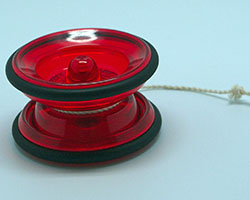 The weight gain seen during "yo-yo dieting" may actually be an adaptation to conditions when food is an unreliable resource. Image by Clément Bucco-Lechat.

Due to the results of their game, the scientists have shown that yo-yo dieting isn’t necessarily because of something “broken” in modern humans. Weirdly enough, yo-yo dieting could be the result of our bodies being good at keeping us alive. Our attempts to diet send misleading information to our bodies, causing us to pack on the pounds to deal with the scarce food conditions.

Just like participants in a long-distance car race who make decisions to fill up on fuel based off their surroundings, our bodies may be making decisions to gain fat based on how we diet. Knowing this could allow scientists and doctors to better treat obesity and design better ways for us to lose weight. 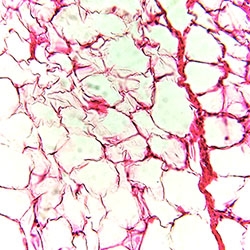 Our bodies have special cells called adipocytes that store fat in semi-liquid droplets. How might our bodies have evolved to promote the storage of fat?