Arthropod: animals that typically have hard segmented outer shells that work as a skeleton (exoskeleton). This includes spiders and insects as well as other animals......more

Perfume: a mixture of scents (smells) that are used by animals as signals, such as attracting a mate... more

Tibia: the larger of the two bones that are found in the leg... more animal or arthropod

Male orchid bees woo females with complex perfume blends according to one explanation of the scent collecting behavior of male orchid bees. The idea behind this hypothesis is that when a male displays a particular perfume mixture, he is advertising his high quality to potential mates. Orchid bee males fly long distances and visit many different odor sources to build up an attractive smell. Scientists think that orchid bees use these scents like some birds, like peacocks, use brightly colored or elaborate feathers to judge the quality of male—and the likely quality of the genes that they will pass on to their offspring. Female orchid bees usually mate just once in their lives, so it’s especially important for them to find a good mate.

Different orchid bee species prefer different perfumes, and scientists have discovered that perfume collection might even play a role in the evolution of new orchid bee species! Male orchid bees collect the individual scents that make up their particular perfumes from many different sources including flowers, rotting wood, plant wounds, and even feces. The scents are stored in special organs in the bees’ back set of legs.

To collect the odors, the bees use a process very similar to techniques used by parfumiers, people who make perfumes and colognes for women and men.  They trap the molecules that produce a scent by coating them in a fatty substance. Unlike the parfumiers that need to use special chemicals, the orchid bees produce a fatty substance in special glands in their bodies.

Once they’ve trapped the odor in the fatty secretion, they soak it up with dense brushes of hair on their front set of legs. The bees then go through a complicated series of motions, using all three sets of legs, to move the scents onto their extra-large back tibiae. From a distance, it looks as though they’re riding tiny, invisible bicycles through the air.

Once on the hind tibiae, the fatty scent mixture is sucked through a small tube into the hollow interior of the tibias, called the hind-tibial organ (HTO). The HTOs are full of complicated folds that increase the surface area, similar to the folds in the brain. The spaces between the folds are filled with branching hairs, and the combination of the folds and hairs makes the HTOs much like a sponge. The HTOs are very efficient and can store scents for a long time. As the bee collects new scents, they combine in the HTO to produce the perfume he will use to attract mates.

When the male bee is ready to mate, he performs a display in his small territory and waits for females to come by and check him out. The male typically performs his display on a tree trunk or stick, making short hops and fanning his wings while releasing his collected perfume. If a female passes by and likes what she smells, the pair will mate and produce a new generation of orchid bees. 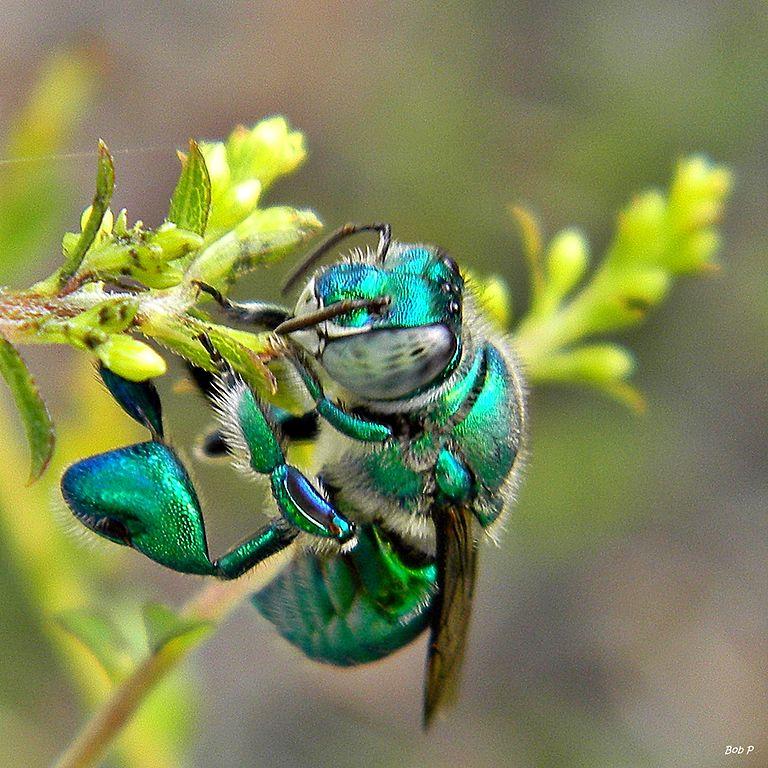