Icarus: The mythical son of Daedalus who used wings made by his father to escape from Crete. Unfortunately the feathers were attached by wax and...more

Mutualist: a virus or living thing that grows inside or alongside a living host, helping both of them grow better than if they were alone.

Orchid bees come in an amazing array of shapes and colors. There are big fuzzy black and yellow Eulaema, bright green Exaerete as long as your finger, and the brilliant, metallic Euglossa in shining blue, green, red, and gold.

Orchid bees are found only in the Americas. There are around 200 different known species, and new orchid bee species are discovered every year. The most diverse orchid bee populations are in Costa Rica and Panamá, but can be found all the way from Florida in the north through Brazil in the south. Only a single species can be found in the United States. This bee, Euglossa viridissima, is a recent arrival from either Mexico or Central America and was likely introduced to the United States accidentally.

How far would the mythical character Icarus need to fly in order to match the distance of the tiny orchid bee? Click to find out.

Like many other bees, orchid bees collect nectar, pollen and resin from plants. These tiny but powerful fliers often travel long distances on their flights—some bees can fly up to 30 miles in a single trip. That’s really far when you’re only an inch long.

One reason that orchid bees might fly such amazing distances is because of a peculiar habit of the male bees. Male orchid bees collect scents in special chambers in their hind legs. To get just the right mixture of smells, orchid bee males might have to fly very long distances. Scientists aren’t sure just why the males collect these smells, but they think it probably has to do with attracting mates and that females are more attracted to some scent mixtures than others.

Why Call Them Orchid Bees?

This perfume-seeking behavior is also where orchid bees get their name. The males are especially easy to spot as they hover over plants searching for that perfect smell, and orchids have some amazing adaptations that exploit this behavior to ensure pollination. These orchids lure bees in with enticing scents of vanilla, cinnamon, and …rotting meat.Yuck!

As the bees crawl into the flowers to collect the perfumes, the orchids glue packets of pollen, called pollinaria, onto the bees in hard to reach places. These pollinaria will pollinate the next flower of the same species that the orchid bee visits. This is what is known in biology as mutualism. Both the orchid and the orchid bee benefit 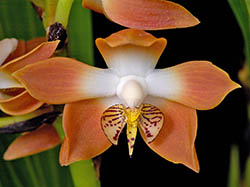 from their interaction. The orchid bee gets to collect the perfume (or is that cologne for males?) that might help him find a mate, and the orchid gets pollination help.

Some orchids are entirely dependent on orchid bee males for pollination and reproduction, but most orchid bees visit many plants to meet their needs—not just orchids. Even so, orchid bees are very important pollinators in tropical forests, and scientists are working hard to learn more about what orchid bees need in order to stay healthy and to help keep the ecosystems of the Americas healthy.

Kate Ihle wrote this story for Ask A Biologist while researching orchid bees on Barro Colorado Island. You can learn more about Dr. Ihle in our Panama Kate story. 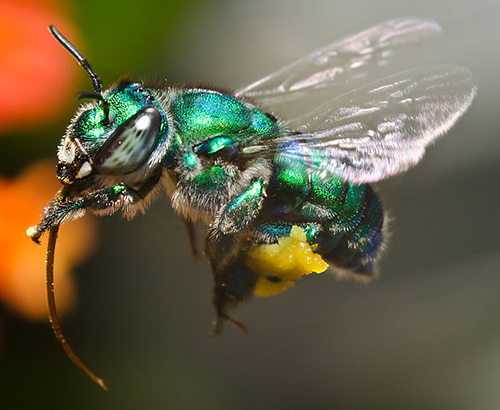 The colorful orchid bee is one of the jewels of the rainforest.

What's the Buzz About Bees and the Bee Genome?