Behavior: in biology behavior is anything that an organism does involving action and response to stimulation. There are two types, innate (part of its nature) and learned behavior... more

Model organism: a non-human organism studied in detail to provide understanding about the workings of other organisms... more

Have you ever sat back and screamed out loud, “It’s not fair! My friend can eat a whole bag of cookies and not gain one pound, but if I eat just one, I will put on ten pounds!”? Or your friend is so skinny because he or she never gets hungry, yet if you just smell food you lose all control? 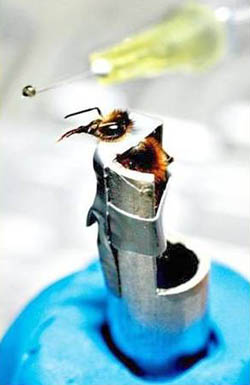 A special holder holds a honey bee that is being used to test if it likes the sugary reward. At the end of the test, the total times the bee stuck out its tongue is recorded for comparison with other bees. After the test, the bee is released or may be used for another experiment.

Each day we pick foods that are protein rich, fatty, starchy or sugary. You know these foods. They are hamburgers, french fries and chocolate shakes. The decisions we make about the types of food we eat may influence how our bodies store and use the energy we get from our meals. In the PLOS Genetics article, “Gustatory Perception and Fat Body Energy Metabolism Are Jointly Affected by Vitellogenin and Juvenile Hormone in Honey Bees,” scientists may have found a key to unlock the mystery of how we decide what foods to eat.

Before we go further, lets talk about food. In particular a kind of food that can be found on your grocery shelves labeled “genetically modified.” These are the same foods that you might hear about in the news. There are people who see genetically modified foods as a benefit and others who are concerned about their impact on the animals that eat them. This also includes humans.

But what exactly does it mean to genetically modify something? First, we need to understand what genes are. Genes are little pieces of code in our DNA that tell our bodies what they will look like or how they will act, such as what color our eyes will be, if we will have fingers or hooves, and if we prefer sugary foods instead of salty ones.

These little pieces of code are similar to those used by a programmer to create a computer game. In the code are specific instructions that can create the details for the game and how it works. For example, one piece of code may choose the color backdrop of the game, while another piece of code decides the color of the character’s shirt. The more complicated the game, the more code a programmer has to use. These codes do not do much when they are on their own, but when they are all put together, you get a complete video game that is ready to be played.

Very much like what makes computers and smart devices work, all living things have a unique code with instructions that make them work. Click image to enlarge and read more.

A Honey Bee Diabetic With a Sweet Tooth

Just like a programmer can modify a computer game code to change the color of the backdrop or the character’s shirt, scientists can change gene codes in a developing animal to modify how an adult animal looks and acts. They can either add or remove one or more genes from animals or plants. This changes or 'reprograms' the code for that animal, although not all genes that are modified may affect the animal. Another fancy term for removing genes is ‘gene knockdown’. For this experiment scientists knocked down two genes from honey bees. The results were that the bees became diabetic and addicted to sugar.

Diabetes is a disease that stops the body from properly using and storing energy. When we eat food, our body turns that food into energy. One very important energy source is sugar. Diabetics are unable to take sugar that is floating around in their blood and transport it into their cells to use as fuel later on.

The pile of coal on the left and the pile of sugar on the right are both sources of energy. If they cannot be converted into useable energy, either in the example of the coal-burning train, or inside the body, these energy sources become a problem as the unused energy grows.

Think of it this way—old steam trains used to require someone to shovel coal into the engine’s furnace where it would burn and release energy to move the train forward. If the door to the furnace is closed, the coal will never get in and the person shoveling will just spill coal all over the floor. The same thing is happening inside a diabetic’s body. Cells are closed and sugar cannot get inside. The sugar, like the coal, then builds up on the outside and damages surrounding areas. This is very bad for the diabetic, who needs that fuel inside of the cells so the cells can work properly. If we think back to our genetically modified bees, by removing specific genes, the bees became diabetic.

This is a graph from the PLOS story. Click on the image to get the whole story.

The removal of genes also made the bees prefer to eat sweets. This is  similar to a person who likes to eat candy and cookies all day instead of something that would be more helpful like a nice juicy steak or vegetables. The reason why the bees became addicted to sugar still is unknown, but scientists continue their work to find the answers.

What Does This Mean for People?

This research might seem like a lot of fuss over honey bees, but scientists have learned new information that could one day help humans. First, knocking down two genes in the honey bee changed the foods it craved. This changed the bee’s behavior, making it search for more sugary foods to feed its sweet tooth. Second, a bee was created in the lab that mimics a diabetic’s body. This could lead the way for using the honey bee as a model organism when studying genetic disorders, like diabetes or obesity, that we find in people. So the next time you see a friend who can’t control themselves around that box of doughnuts, remember: their behavior might be programmed in their genes.

Bees on sugar cube, used with permission of Christofer Bang.

Pile of coal and shovel by jpmueller99 CC. 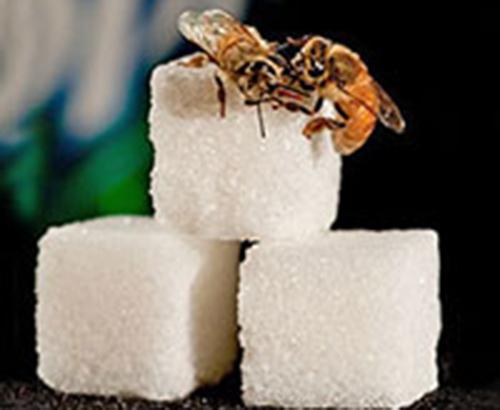 Giving bees a sweet tooth might hold the key to unlocking secrets of diabetes.
Gustatory Perception and Fat Body Energy Metabolism Are Jointly Affected by Vitellogenin and Juvenile Hormone in Honey Bees
Learn how to read a scientific article