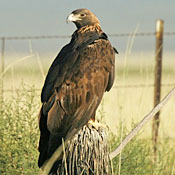 Length: 40 in. (88 cm )
One of the most wide spread eagles in the world, the Golden Eagle is found throughout the Northern Hemisphere. In North America it is most regularly found soaring high over grasslands, deserts and mountains. They feed mainly on mammals, such as rabbits, but they will eat reptiles, birds, large insects and carrion at times. The bulky nest is made of large sticks and placed high in a large tree or on the ledge of an inaccessible cliff face. 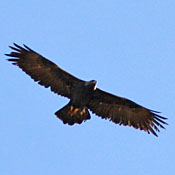