Like many animals, you are likely to see different shapes, sizes, and colors of blister beetles. Here are a few family pictures from the blister beetle family album. Some of them are more colorful than others and all of them have a nasty chemical in their blood.

Variations of blister beetles: Here are two southwestern species of blister beetles that have been put in different groups, Lytta (left) and Pyrota (right).  Although they are not closely related, they both are brightly colored and conspicuous the better to warn predators to leave them alone or risk eating a toxic meal.

Variations of blister beetles: Two more southwestern species of blister beetles that belong to the same genus (Epicauta).  Although they are not as brightly colored as the first two species above, they are both easy to see thanks to their largely dark black coloration, an indication to birds that they too should be left alone.

Blister beetle courtship:  The beautiful Tegrodera aloga warn away their enemies with their colorful appearance.  When a male finds a female, he courts her by wrapping her antennae with his and drawing them through grooves in his head, which probably helps the female smell the cantharidin contained by the male. In this way, females can choose males with lots of cantharidin to donate to them when they mate.

Flying and mating:  Males and females of Lytta magister apparently can smell others from a long way off because they fly in to join large groups of their species.  Once there, males court females by climbing on top of potential mates and stroking their antennae.  Here a large male has gotten in position to mate while a small rival male can only approach the female and wait. 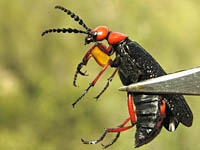