Why is Rudolph's nose red?

Submitted By:
Andy and his mom
Grade Level:
2
Answered by:
Karla Moeller 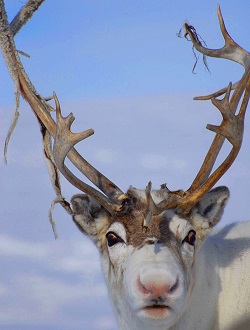 Both male and female reindeer have antlers. This reindeer's antlers are shedding, which happens as a late part of antler growth. Image by Kia Krarup Hansen.

You might think that Rudolph's glowing red nose could only make sense in cartoons. "Rudolph the red-nosed reindeer has a very shiny nose..." And the way the story goes, he doesn't have just any shiny nose. He has a nose that glows.

But what if there was science to back up this cartoon claim? Reindeer do in fact have noses that glow. That is, as long as you look at them through a camera that shows heat. This is called a thermal camera.

For the most part, the nose barely glows. It has a lot of blood vessels in it, but is still kept fairly cool. The purpose of this is to save heat and water.

All animals with lungs like ours make air warm when they breathe in. Warm air holds more water, so this air picks up water in the moist body. But when these animals breathe out, this means that heat and moisture is lost. Because of this, when you breathe out on a cold day, you can see your breath. This is water condensing out of the warm air into a sort of dense fog.

So what happens in reindeer? A reindeer's nose is often kept a little cooler than the head and lungs. As a reindeer breaths out, the air cools in the nose. Because cool air holds less water than warm air, some water comes out of the air. This happens inside the reindeer's nose and it lets the reindeer save water. Heat also moves from warmer blood vessels to cooler ones. This helps keep heat in the body. But this changes when reindeer are on the move. 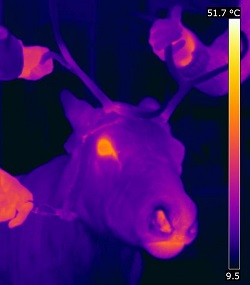 With thermal imaging, we can see that reindeer noses can glow. Click for more detail.

Reindeer are ready for cold weather. They have dense fur that covers all of their outer surfaces. They even have furry noses. Some parts of their bodies, like the legs and ears, stay cooler than the rest of the body. This makes it so they don't lose too much warmth from those areas.

But this heat-saving system can make a running reindeer get too hot. This is where the glowing nose really comes in handy.  When reindeer warm up during exercise, they get rid of lots of this heat through their noses. This heats up the nose. And what does a hot nose look like in a thermal camera? Bright and glowing.

So, while Rudolph wouldn't have a light bulb on the end of his nose, his nose would indeed glow.

Want to listen to the basics about reindeer's glowing noses? Check out our video, with Dr. Karla Moeller:

To learn more about reindeer and the habitat in which they live, try the following link.

Also, to see some of the research behind this answer, visit the following website. 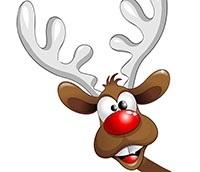