Blister: raised part on the skin that contains watery fluid.

A Story of Blood, Love, and Family… 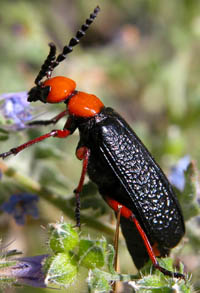 You have a chance around Phoenix, Arizona to see one of the biggest and fanciest blister beetles anywhere.  This species goes by the scientific name of Lytta magister but has also been called the “master blister beetle,” most likely in honor of its large size. These beetles can grow up to a couple of inches long and be very colorful, a nice mix of deep black and bright red-orange.  If you do find it, odds are it will be in the springtime when the brittlebush, a very common desert shrub, is flowering.  Often a single bush will temporarily be home to a small band of the beetles, several dozen of which may dangle from the flower stalks of the plant.

Few of us are tempted to pick up great big, black and orange beetles and this makes sense when you find master blister beetles.  The “blister” in the name refers to the beetle’s ability to pop a blood vessel in the joint of a leg, which causes the insect’s yellowish blood to ooze out. The beetles do this only when they are upset. For example, when held firmly by a person. The blood is not only bad smelling, it’s downright dangerous, capable of causing skin to blister painfully.  If a bird or mouse were to try to eat a master blister beetle, the hungry animal would get a mouthful of the disgusting blood, which might cause it to think twice about finishing the beetle off. 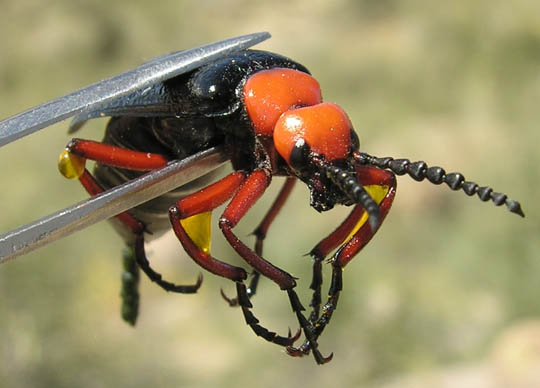 Blister beetles are great to watch, but not touch as you can see the yellow oozing blood is used to keep predators away. Their blood can also cause some nasty blisters on the skin.

So master blister beetles are protected chemically from their enemies, which is why they can afford to be so conspicuous. They are advertising their protected status to birds and other predators, warning them to keep away. Luckily, you do not have to hold them in your hand in order to enjoy seeing them in their brittlebush groups.

If you do spend even a little time watching the beetles, you will surely observe some beetles rapidly eating the yellow petals of brittlebush flowers. Other beetles will be scrambling through the plant. These are males and when a male comes across a female, he may begin to court her, which the beetle does by climbing on his partner’s back and sweeping his antennae across the female’s head. If the female is impressed by this courtship, she will permit the male to mate with her.

To impress a female, a male beetle has to be as large as his partner. Biologists think that when the male climbs onto the female’s back, she can tell how much he weighs. Big females refuse to cooperate with males smaller than they are. Only big males have a chance with these individuals. Medium-sized and small males have to find a suitably mid-sized or small females if they are going to have a chance to pass their sperm to a mate. In the groups of beetles that form on or near a brittlebush or some other food plant, you can often see nicely size-matched pairs of beetles with huge couples moving around near much smaller male-female partnerships. 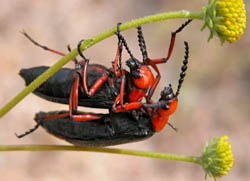 After mating has begun, the female often drags the male with her from flower to flower.  She doesn’t let their coupling interfere with her meal, which is sensible because when the beetles mate, they remain attached for many hours, often more than 24! Eventually, however, the male and female separate.

Now single, the female lifts up her wing covers and unfolds her flying wings for take-off.  She will head up, up and away in the search for a distant place where she can land and lay her eggs. After she inserts her eggs into the soil, she leaves her offspring to their fate.  When they hatch into baby beetle grubs, they burrow through the soil in search of a cluster of grasshopper eggs, which they probably locate by detecting the odor of these unlucky eggs. If a grub hits paydirt, it will feast on grasshopper eggs and eventually join a new generation of adult master blister beetles in the spring time ready to repeat the cycle of its parents.

I don’t need to tell you now to leave them alone if you are fortunate enough to find a mob of beetles in a brittlebush. 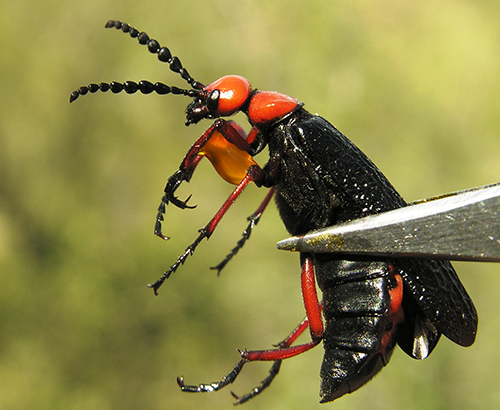