Why is the bee population decreasing? 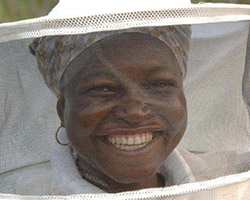 Many bee keepers wear protective equipment to avoid being stung by their bees. Here we see a veil protecting this bee keeper's face. Image by Guy Stubbs.

The bee keeper secured the veil to her protective bee keeping suit and started to check on her honey bee hives. She pulled a frame out of her hive box and noticed something odd. It was full of honey, but she didn’t see any bees. In the next hive, she saw the same thing. In most of her hives, the bees had disappeared and in others, the bee numbers were very low. What was happening?

Honey bee decline is a very real issue that took a turn for the worse in the United States in 2006. It was especially worrisome because the bees and hives weren’t showing any of the symptoms of the diseases or problems known to affect bee colonies. To fix the problem, researchers needed to know what was causing it, but they couldn’t figure it out. This mysterious bee decline is called colony collapse disorder or CCD. Since 2006, researchers and beekeepers have been studying the causes of CCD. 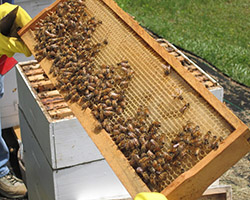 Researchers are still unsure of what causes Colony Collapse Disorder, but they are still studying bee colonies to try to figure it out. Click to enlarge.

Researchers keep crossing possible causes off of their list, but have no firm answers. One of the main causes is likely due to the parasitic Varroa destructor mite that feeds off of larvae. These mites also spread viruses. Affected colonies often have infections of deformed wing virus, Israeli paralysis virus, or other viruses.

However, these infections don't seem to be the sole cause of CCD as some affected colonies don't have the viruses. Other causes may be a change in food availability for honey bees, or it could be fungi, other parasites, and pesticides. Often, several of these factors are found after the colony has collapsed. This suggests that together they could be causing bee decline, rather than there being a single cause of CCD.

One thing that most researchers seem to agree on is that modern migratory beekeeping has helped to spread many diseases and parasites. Thousands of bee colonies are trucked across the country for pollination and honey production. No one cause of CCD has been identified, but keeping bees in dense populations means that any infection can spread very quickly. Moving bees around may also stress them out, which could reduce their abilities to fight infections. Researchers have found come clues about why the bees are declining, but they are still working hard to pin down the main cause of CCD.

Can we save the bees? 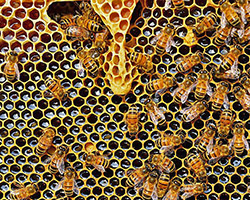 How can you help keep bees healthy? Click for more detail.

The bee decline is still a major worry for the future of agriculture (and so, for available food!) but the decline was the worst in 2006. Though the bee decline hasn’t been quite as bad since, our bees aren’t out of danger yet. We still aren’t sure what causes CCD, so don’t know if it will get worse again. On top of that, pesticides and destruction of natural bee habitat can all contribute to decreasing bee numbers. But, there are ways that you can help keep bees from disappearing.

First, you can avoid using pesticides in your yard and you can plant a bee-friendly yard, with a variety of plants and flowers that attract bees and other pollinators. You can also support small local farms in your area that grow a diversity of crops which help support other insects that also pollinate plants. Finally, you can help support bee keepers by buying your honey locally. We depend on bees and other pollinators to help make enough food to support our population. Let’s make sure we are doing all that we can to support their populations too. 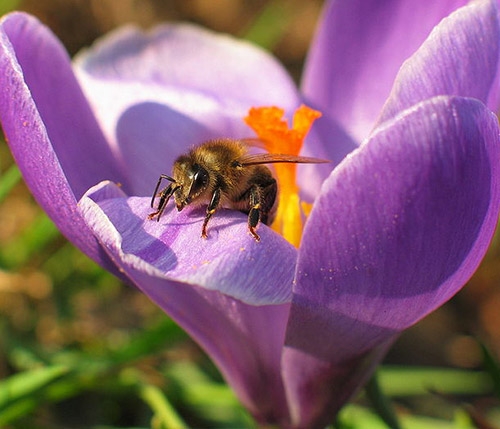 Honey bees are important pollinators. We need to help keep our bees healthy so they can help us produce enough food.