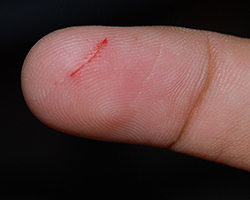 Have you ever accidentally gotten a paper cut and bright red blood oozed out? Because of experiences like this, most of us associate blood with the color red. We sometimes even use 'blood-red' to describe a bright reddish shade. Why then do many people wonder if blood is blue?

You might have noticed that under skin of certain colors, some veins appear bluish-green. In many anatomy books, some veins are colored blue. These observations may have led you to question the actual color of blood. So… is blood ever blue? Well, the quick answer is no, human blood is always red. But let us look at some blood basics as we dive deeper into this question.

An adult human body holds about 5 liters of blood. Human blood is made up of about 55% plasma (water, salts, and proteins) and about 45% red blood cells. The tiny bit left—less than 1 %—is white blood cells and platelets.

Red blood cells carry proteins called hemoglobin. Iron is an important part of hemoglobin, and it’s what makes it possible for those proteins to carry oxygen, which all your tissues need to live. 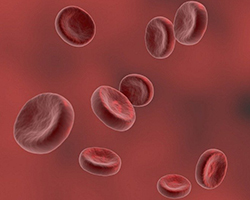 The main job of your heart is to pump oxygen-rich blood through your arteries and into your tissues. As your blood travels through different tissues, that blood drops off oxygen. Then, your veins bring the blood (that just dropped off oxygen) back to your heart. That blood can then be taken to your lungs, where it once again picks up more oxygen. This extremely important process is how all your tissues can get enough oxygen to stay alive.

So… what does this have to do with color?

We see the world around us in color. Most leaves and mosses are green, our wooden tables are brown, and we have a huge range of colors of clothes and foods. These colors look the way they do based on how light interacts with those objects and reaches our eyes.

Light is a wave. Just like waves in the ocean can be smaller or larger and closer or farther apart, light waves also have different wavelengths and frequencies. Different objects either absorb or reflect those different wavelengths and frequencies of light. If they absorb them, we don’t see that light. But if they reflect a certain wave, that decides what color we see in the object. And now (finally!) we’re ready to talk about blue blood.

What color is blood? 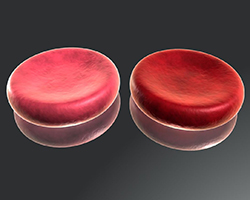 A fully oxygenated red blood cell (on the left) is a bright red. A red blood cell that carries less oxygen is darker red (on the right). Image by Rogeriopfm via Wikimedia Commons.

Let’s revisit the blood protein hemoglobin. This protein carries oxygen from the lungs to different parts of the body. It can carry the oxygen because it’s made of iron, and iron bonds to oxygen. The iron is also what makes blood red. When more oxygen is attached to hemoglobin, it’s brighter red. When less is attached, it’s a darker red. As blood moves through tissues, the protein drops off oxygen. That means that the blood in your arteries (freshly oxygenated) is brighter red than the blood in your veins.

Why do veins look blue through light skin?

Veins, such as the ones on the back of your hands, are closer to your skin surface than your arteries, which makes it possible to see them. Venous blood appears blue through lighter skin because of a trick that light plays on us. 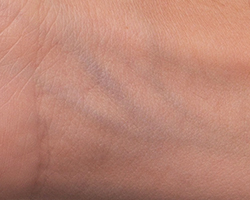 The light around us has all different color wavelengths in it. Different wavelengths of light enter the skin to varying lengths. Red, having the longest wavelength, travels farther generally, and is also more easily scattered by our skin and fat. Having a shorter wavelength, blue enters the skin only a short distance and is mostly reflected back. Less blue light is scattered (the way the red light is), so the light that is reflected by veins and that reaches our eyes is blue. So, against some skin tones, veins appear more blue than red in color.

But wait… it is not just the light that does the trick. Our brain has a role to play in this too. We see color with respect to its background. A lighter color appears brighter when placed on a dark background. In the same way, veins appear darker and more bluish against the lighter, surrounding skin. Perhaps these light tricks are part of why the blood in our veins is often drawn very blue in textbooks. Over time, this has helped trick many people into thinking that blood in our veins, when it is low on oxygen, is actually blue. But in reality, it is dark red. 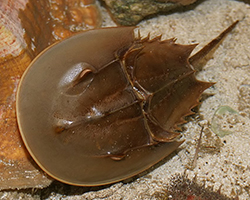 Horseshoe crabs are just one type of animal that has blue blood. Image by Hans Hillewaert via Wikimedia Commons.

Just because humans don’t have blue blood doesn’t mean blue blood doesn’t exist. Some animals don’t use hemoglobin, like we do, to move oxygen around their bodies. Some crabs, spiders, and other invertebrates use haemocyanin. This protein is built around copper instead of iron. When that copper is oxygenated, it is blue! So, some animals do have blue blood. But humans and other mammals always have red blood.

Image of circulatory model by Bryan Brandenburg via Wikimedia Commons. 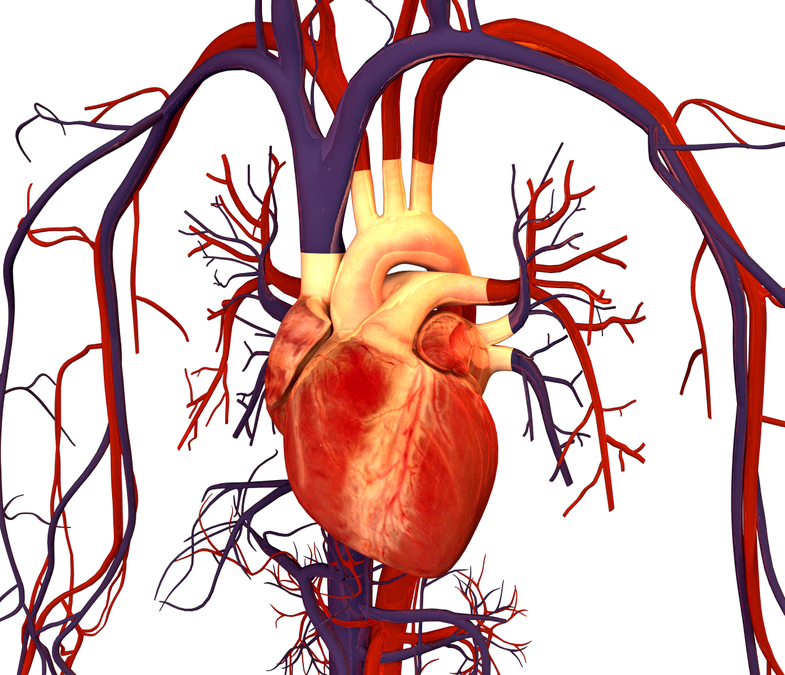 In illustrations or models of our circulatory system, blood in arteries is shown as red and blood in veins is shown as blue. But should the models be trusted? Is our blood actually blue?