How to Make an Origami Protein Channel

When was the last time you folded a piece of paper to make a fun shape? Maybe you made a paper plane or tried origami to make a swan. Believe it or not, the building blocks inside your body also need to fold into the right shapes to work properly.

In Part 1 of this activity, you will learn how to make one amino acid, just one of many components that make up a protein. You’ll need to repeat this step 8 times with separate pieces of paper for a total 8 amino acids before moving on to Part 2.

In Part 2 of this activity, you will take the 8 amino acids that you’ve just made and connect them together to make a complete protein channel.

You can also download and print our Origami Protein Handout (PDF) for step-by-step instructions of how to make your protein channel.

What to learn more about the channels in your cells that keep your body running smoothly? Visit Venom to find more information on how to build your own protein channel from paper. Here, you can also learn more about the tiny protein building blocks that make all living things work, and even test your skills battling scorpion venom in our online game.

Tip: You can pause the video as often as you'd like between each step to make it easier to follow along.

In this video, we’ll show you how to make an origami protein channel model by folding paper.

This is a finished model. It's made out of eight separate square pieces of paper and it can have two different shapes, either closed or opened, depending on how it's folded.

Here it is closed. And here it is opened. Each of the 8 points are the same and were made from a different piece of paper.

These channels, and others, are found on the surface of cells. They work like special doorways that let only certain things, like proteins, in out of the cell.

Proteins are made of building blocks called amino acids, and have their own special shape. Not only do they look different, but they have different jobs to do inside the cell.

Some proteins help move things around in the body, others act like support structures or glue to hold parts of the cell together, and some can help reactions in the cell go faster.

The protein we’re making is a channel that sits in the outer cell surface, or membrane, and works like a door that lets certain molecules pass through. Some channels are open all the time while others can be closed depending on signals from the cell or the environment.

To make a protein channel, you'll first need to make eight amino acids. You can use just about any kind of paper you want, as long as all eight pieces are square and the same size.

Your paper should look like this. Now, open it up and flatten it out. Next, we’ll fold it in half again but this time horizontally.

Next, fold it in half again. This is how your paper should look.

Lift the side you just folded and press it down into a triangle, along the crease you just made. Your paper should look like this.

Now we’re going to flip it over and repeat that step on the other side. Lift up the left side and press it down into a triangle again. It should end up looking like this.

Next, fold the outer edge of the top layer only to the center line of the triangle. It should look like this.

Now that we’ve done the top layer, we're going to flip it over and repeat that step on the back. Fold the outer edges into the center crease. And… that’s it! Here is our finished amino acid.

Repeat this process with seven more pieces of paper until you have a total of eight amino acids.

Now you’re ready to move on to Part 2. The next video will show you how to assemble these eight amino acids into a whole protein channel.

This is Part 2 of How to Make a Protein Channel. In this video we’ll show you how to take the eight amino acids created in Part 1 and connect them to make a protein channel model.

Now remember, proteins are molecules in your cells that do many different jobs to keep your body running smoothly. They're made out of amino acid building blocks.

Start with two amino acids. If you folded your amino acids correctly, you’ll notice that each one has 4 tabs that can be opened up.

Line up the tabs of two amino acids, and slide the closed tabs of one into the open tabs of the other. Make sure you are doing this with the top tabs only.

Once they fit together, fold it in half. Here we’ve connected two amino acids. Notice we still have four tabs on the outside. We are going to repeat this process to add the next amino acid.

Open up the tabs, and slide the close tabs of a new amino acid into the open tabs of the other. Again, make sure you are doing this with the top tabs only.

Once they are connected, fold them in half. We should still have four tabs on the outside. Continue adding amino acids until all eight are connected in a chain.

Now we have eight amino acids in a chain. All that's left to do is bring the ends together and connect the last two tabs. Open the two tabs and slide the closed tabs of the end into the two open tabs. Once they are completely connected, fold them in half.

And that’s it! Here is our finished protein channel. To change its shape, take the points from the outside and fold them into the center all at once.

Now that you’ve finished building this model, you hopefully have a better idea of how proteins are made, and also how protein channels work.

Remember, protein channels found on outside surface of the cells act like doors letting other molecules in and out.

When the channel is open, molecules can enter through the hole in the center. Signals from inside the cell or the surrounding environment tell the channel when to open and close.

As you saw while building your origami channel, the shape of protein is very important. If you didn’t fold your origami amino acids correctly, they wouldn’t fit together to make a protein chain. Or, if you made a mistake joining amino acids together, the finished channel might not be able to open and close correctly.

In nature the same thing can happen. If a protein is the wrong shape, it won't work. It has to have a specific shape in order to work correctly, just like your origami protein channel model. 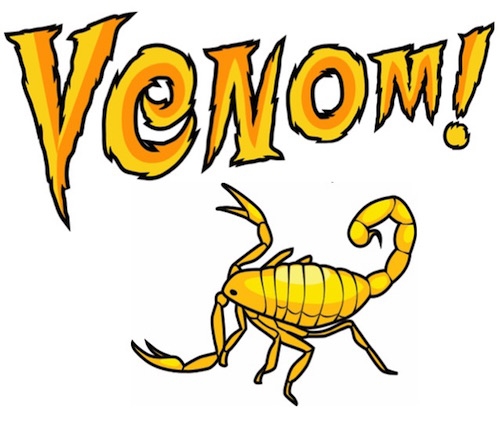 Visit Venom to learn more about the proteins and channels in your cells.