A quiet western town waits for the arrival of the swarm of contestants for the 2011 Ugly Bug Contest.

The video opens with white words on a black background. The words read, "For one year they waited in a quiet" and in the first couple of seconds the words "WESTERN TOWN" fade in below them. 'Western town' is in gold text.

The scene changes to a train pulling into a small town. The train and buildings are silhouetted against a background of tan mountains and blue sky. We hear the "toot-toot" of the train's horn, and a harmonica starts playing, along with some ticking percussion.

The view pans into the middle of the town and we see three people standing in the middle of a dirt road. First we see them from the back - from left to right they are: a tall man with brown hair and a large hat, wearing a white shirt and blue jeans; a shorter man with white hair and a larger hat, wearing a jean shirt and pants, and a little girl with pink hair, wearing yellow and white dress. Both men have their hands on their hips. The video shows them from the front next, and we see that the shorter man has a large white mustache, and looks older than the other. The little girl is smiling.

The screen fades to black, and the words, "And then THE SWARM came riding in…" appear on the screen. Most of the text is white, but "the swarm" is gold.

The next scene shows a large view of the desert. There are large red rock formations in the foreground, and further back are purple mountains and a train passing by. There is a cloud of dust rising from the desert floor.

The music changes, and now we can hear a sound like the patter of feet, galloping horses, or a stampede.

(Scene shown in aerial view) The next frame is a close-up of the large cloud of dust. We can't see what is in it, but there are flashes of antennae sticking up.

The scene changes and now we can see purple and blue bugs running past, in a desert landscape dotted with saguaro cacti. The bugs are scurrying across the desert leaving a huge trail of dust behind them.

Back in the town, we see the three people standing their ground as a large cloud of dust approaches. The view flashes from the three of them, to the oncoming bugs, and back again. Each time our view returns to the people, the image closes in on the old man, whose eyes are getting wider.

The bugs come to a stop in front of the people just as the music stops. Each person's eyes get round, as though shocked, and we hear a gasp, "Huh!"

The frame shifts to the little girl, who blinks twice, then smiles and waves.

Closing in on the blue bug. This bug has purple eyes, a black head, and a dark blue body. It has two long grey antennae and as it flicks one of them we hear the sound of a whip cracking.

The images changes to planks of wood, over which the words "In the end there could be only one winner in" moves up the screen as our view pans down. It stops over a more worn-looking section of wood, and we can see part of a wanted poster in the frame. In a flash of glowing red-orange light, the text changes to say, "The good, the bad & the Ugly Bug Contest." These words linger on the screen as the background fades to black.

The text changes to say, "Will it be..." and then we see images of four of the contestants. Each image lists a nick-name, scientific order and factoid about these bugs. Inspirational music swells as each bug is shown.

The first one is "Rosie," Collops vittatus, a red and tan bug with a squat face, who is shown against a blue background. Rosie's factoid is "aphid and white fly killer."

The next bug shown is "Doc," Hymenoptera, a green and brown bug with long curled antennae, whose factoid is "destroyer of any plant pests."

"Big Bob," Algarobius prosopis, is third, and "loves a good mesquite seed." Bob is yellow and red, and his body is textured in a way that looks like fur or hair.

The last bug shown is "Barney," Phyllotreta, whose factoid is "loves mustard and horseradish weeds." Barney is the blue bug with purple eyes that earlier flicked his antenna, and is shown against a red background.

After "Barney" is shown, the music ends with a bell-sound. The bell keeps ringing as text appears on the black screen. The text says "Which one will be the winner?" and then changes to "YOU DECIDE" in large letters.

The next frame shows the same three people. The little girl exclaims "whoa!" in a surprisingly deep voice. Then the older man says, 'Man, them there's some ugly bugs."

The bell stops ringing in the background, and a sound like a whip cracking signals the transition to the final frame. It has a black background and text that reads, "Vote for your favorite Ugly Bug at askabiologist.asu.edu". 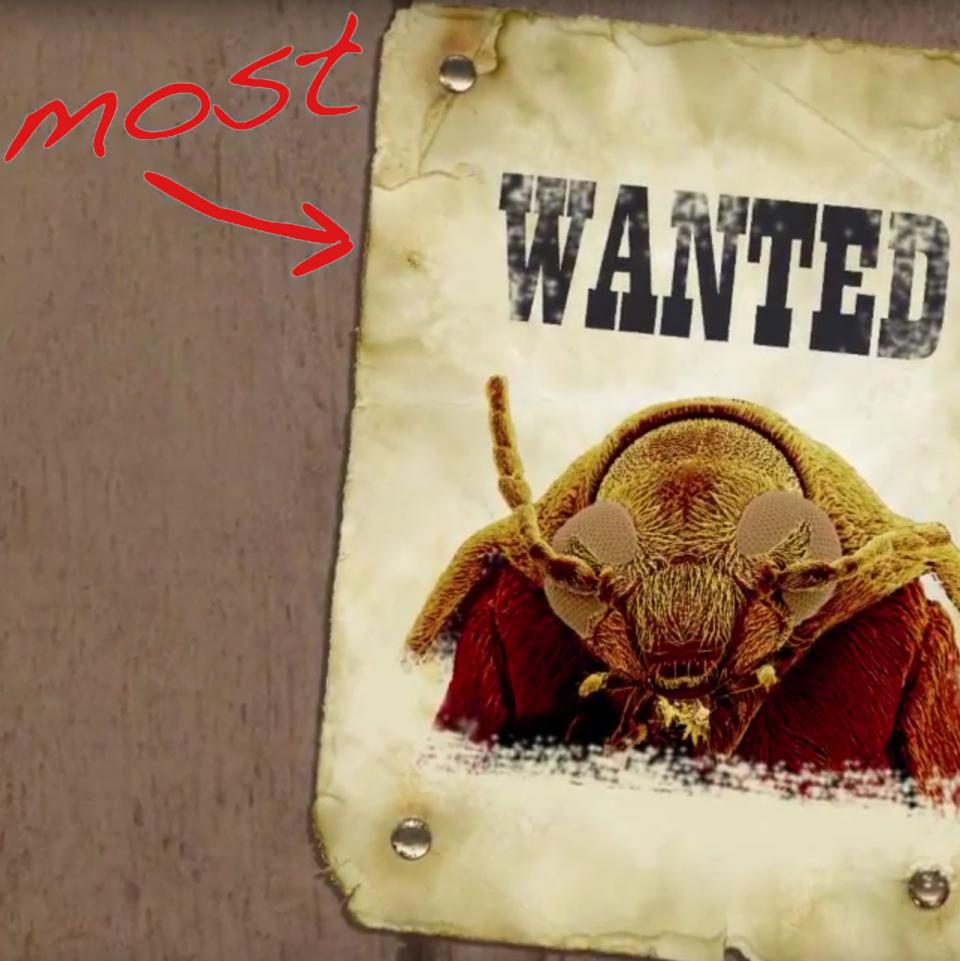