The time has come to crown a champion. The voting is over and out of the rubble a True Bug emerges victorious. Congratulations Alex Assassin bug.

Audio is from the Community Audio collection at archive.org, and the grasshopper video is from istockphoto.com.

The video opens on a black screen. Mysterious music with drumbeats and screeching horns starts to play, and white words appear on the screen. The words read 'The Ugly Bug Contest 2010".

The screen goes to black, and then more text appears. Now the screen reads "Winner," also in white, and the "Ugly Bug Advisory - View at own risk" sign sits diagonally at the bottom of the screen. The music trails off with a drumroll.

Grasshopper: December 15th, 4 o'clock: On this arbitrary date and time, a journey has come to an end. Ten bugs sought to cross over to another dimension. A dimension where nothing gets overlooked, and nothing is insignificant.

As the narrator speaks, the mist and watch disappear and are replace by the image of a green and pink grasshopper, the narrator, who "speaks" directly to the audience. The grasshopper remains on the screen until the sentence that starts, "A dimension where...," then it is replaced by a picture of all the contestants of the 2010 Ugly Bug Contest.

Grasshopper: But only one bug could break through and be the winner.

The image zooms in until the only bug still on the screen is the Assassin Bug.

The screen stays focused on the assassin bug as the narrator announces the winner. At the bottom of the image it says "Reduviidae," and as the announcer speaks, words appear as though typed (one letter at a time) in the center of the screen. The words are, "Profile: Alex Assassin Bug, Bug term status: True Bug."

Grasshopper:  A bridge has now been built between dimensions. A pathway that challenges the mind and reaches beyond the scope of imagination.

The same music from earlier (horns and percussion) restarts at end of the narration, and gets loud for a moment before fading once again. The screen shows mist again, and more white text appears. This time it says, "Congratulations Alex Assassin Bug You are a True Bug Champion," in the center of the screen, and then changes to "Don't forget to download your own ugly bug coloring page and poster at askabiologist.asu.edu."

The mist and text fade away, and the screen is once again black. The credits scroll up from the bottom of the screen. They read, "sponsored by: Northern Arizona University (NAU), ASU International Institute for Species exploration (IISE), Arizona Imaging and Microanalysis Society (AIMS), Dow Agrosciences, ASU School of Life Sciences (SOLS)." The video ends. 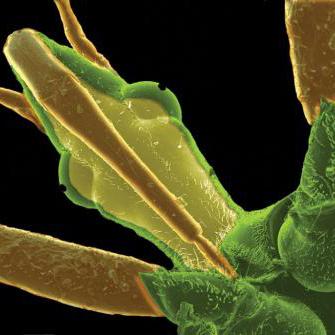