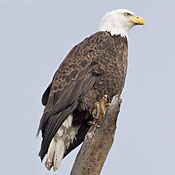 Length: 37 in. (94 cm )
During the winter in central and northern parts of its range, this eagle gathers in large numbers along large bodies of salt or fresh water with large isolated trees. It feeds on fish, small mammals, waterfowl and dead animals. In the desert southwest, it nests during the winter. The nest is most often located in the top of a large tree and rarely on a cliff edge. It is made of large sticks, lined with finer vegetation. The same nest can be used by a single pair for 30 years or more, and every year sticks and vegetation are added to result in an often massive structure. The national emblem of the United States, its recently recovered population numbers mean it may be removed soon from its officially endangered status.

The four-digit banding code is BAEA.