Horizontal gene transfer: the process by which bacteria exchange genes with one another without multiplying....more 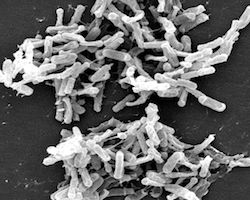 Clostridium difficile under a high-powered microscope. This bacteria is naturally resistant to many antibiotics, and causes people to have very bad diarrhea. Image by the CDC.

There is a very common antibiotic-resistant bacteria species called Clostridium difficile that causes people to have bad diarrhea. C. diff uses both chemical and shape-changing defenses, and tends to thrive in people who are taking antibiotics for other bacteria.

Sometimes, when a bacterium is multiplying, a random mistake in the bacterium’s DNA will create a gene that gives it resistance to antibiotics. Every time a multiplication event happens, there is a chance a mutation can occur. Because bacteria multiply A LOT, there is a higher chance a mutation like this will occur. 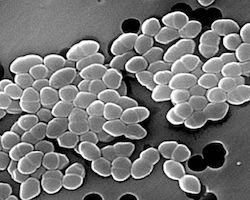 This is one of two different strains of bacteria that have developed different types of resistance to Vancomycin. Image by CDC.

One bacteria species in which this happened is Vancomycin-resistant Enterococci (VRE), a strain of bacteria that is resistant to an antibiotic called vancomycin. VRE have been around for over thirty years, and they are very well studied. In fact, scientists have been able to group different strains of VRE according to how they defend themselves against vancomycin. For two types, called VanA and VanB, the bacteria gained resistance when a mutation occurred in their DNA. This mutation gave the bacteria an ability to fend off the vancomycin molecule.

Some bacteria acquire resistance when they are “given” a gene by another bacterium through a process called horizontal gene transfer (HGT). There are three ways that HGT can occur. 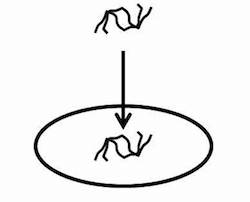 The genes that a bacterium gains through HGT are not always ‘resistance’ genes, but when they are, it greatly increases the risk of antibiotic-resistant bacteria spreading throughout our population.

A dangerous, but also very widespread, bacteria called Carbapenem-resistant Enterobacteriaceae (CRE) is known for its ability to spread ‘resistance’ genes through HGT. CRE can cause infections in our bloodstream, wounds, and urinary tract, and are one of the hardest bacteria to kill, because they can survive almost all antibiotics. 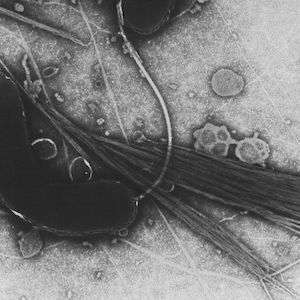 Some bacteria form pili, hair-like appendages shown in a bundle here, that enable them to do well in certain parts of the body of their hosts, or to trade genes with other bacteria.

How Do Bacteria Become Resistant to Antibiotics? | Ask A Biologist
Skip to main content