Locusts, grasses, grasslands, migration, governments, communities on several continents, and all kinds of different scientists. These are just a few of the things that Arianne Cease works with. But when she first decided she wanted to be a biologist, she likely had no idea how far-reaching her work would end up. 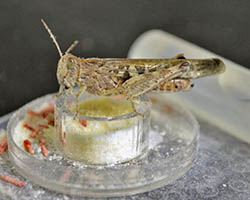 Arianne Cease is a locust biologist, but she also works in many other areas of research. Click to enlarge.

Cease is a biologist who studies locusts, but she doesn't only work in biology. She works with other researchers and communities to learn about how animals, humans, and social interactions across the globe can change ecosystems. In her case, she studies locusts, what causes locust outbreaks, and how they affect farming communities.

She and her research team also look at how human behavior can be altered to help lessen the number of outbreaks. Working across this huge network of information and bringing these groups together makes Cease what we call a sustainability scientist.

She explains sustainability as a way to try to solve global issues. "We're not just trying to find a solution to one very specific part of the problem," Cease says. "We're trying to figure out how that solution affects all other parts of the problem."

Sucked in by Swarms

Cease studied biology in college, but it wasn't until after graduation that she learned how serious locust problems could be. She joined the Peace Corps, an establishment that sends volunteers overseas to work in specific communities. 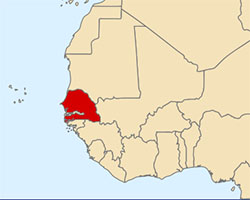 Cease was a Peace Corps volunteer in Senegal, which is a country in west Africa. Click for more information.

Cease went to Senegal, a country in West Africa, where she worked with communities to help implement ways to use trees in agriculture, such as by building living fences. These trees can guard villages from wind and help protect soils in a hot and dry environment.

It was here that she first came face-to-face with destructive grasshoppers, often called locusts. An outbreak of grasshoppers crossed through the village, eating everything green and some of the stored food that the village was depending on to get through that year.

Community members tried everything they could think of to stop the swarm. They covered food stores and tried spreading pesticides by hand to stop the locusts' destruction. But nothing worked. The locusts ate everything. They ate everything green; they ate through the cloth covers people had tried to use to protect their gardens; they even ate the tree bark. The grasshoppers had an obvious impact on the village.

It was then that Cease decided she wanted to learn more about locusts to try to help communities like those in Senegal, and people who were affected by locust swarms, as her host family had been. Cease went to graduate school where she studied how locusts are affected by food quality, which can be linked to different types of habitat. 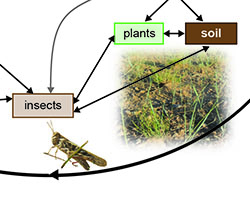 To find sustainable solutions to prevent locust swarming, researchers have to use a few different approaches. Click to see more.

In particular, she noticed that areas where sheep and other livestock were allowed to graze too much seemed to be a special treat for the locusts. These low-quality habitats let the locusts thrive.

Her finding brought attention to how grazing livestock, like sheep and cattle, might be affecting how often locusts swarm, as well as how bad a swarm might get. Her interest was also sparked in how overgrazing in one area could cause a swarm that would devastate an area in an entirely different village or country. The study of how actions in separate communities are linked is called telecoupling.

After her graduate work, Cease took on a postdoc position at the University of Sydney, in Sydney, Australia. There, she learned how her work could fit into a larger body of research focused on how animals balance nutrition. She also learned more about the methods used to study what might cause a normal grasshopper to develop into a more destructive form, the locust. While in Australia, Cease also started broadening the network of researchers and other people who were important to looking at the bigger picture of the problems caused by locust swarms.

Science is a Team Sport

Now, as a sustainability scientist at Arizona State University, Cease continues to expand her network of collaborators who share her concerns. A biologist can't know everything about a problem as big as locust swarming. 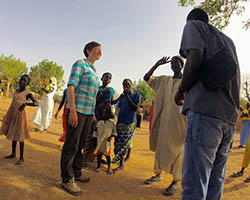 Cease does biology research in a lab, but she also interacts with many types of communities. Here, she is revisiting the village where she was a Peace Corps volunteer. Image by Jenni Learned.

She works with farmers, biologists, pest management agencies, and economists who deal with money and income. She also works with modelers who can make sense of how different parts of this larger picture interact, as well as social scientists who study how people make decisions and how institutions develop over time.

When she started studying biology, she may not have realized what a team sport it could be considered. But now, she proudly works with a huge team of researchers to solve problems that affect people across the globe.

While she thinks globally, Cease also knows just how important it is to understand local problems. She learned this in part from the community she lived with in Senegal. In 2015, she returned to that village and visited with her host family. They were very happy to see her. Perhaps most importantly though, the community members were excited about the ongoing research and wanted to help Cease and her team of researchers as they try to control the problem of locust swarms. 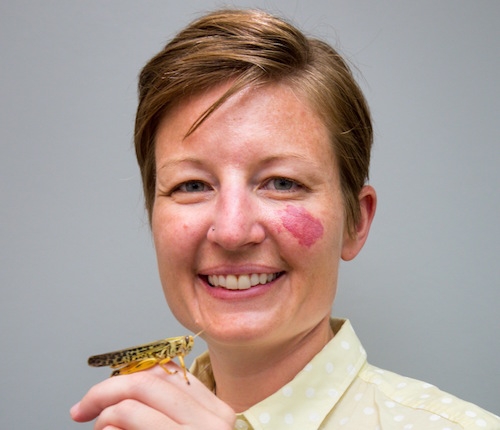 Arianne Cease is working with a huge team of researchers from across the globe to try to control locust swarming.