Instar: stages in the growth of a larva.

Complete metamorphosis begins with the insect hatching from an egg into a soft worm-like shape called a larva. Larvae have a very big appetite and can eat several times their own body weight every day. If humans did the same thing, babies would start out eating as much as 10 pounds of food each day. For insects, this super-sized larva diet makes them grow very fast.

Some larvae add more body segments as they grow. Scientists refer to these developmental changes as instars which are similar to how humans call their children babies, toddlers, or teenagers. For example, instead of being called a baby, a very young larva would be called an instar 1 and a teenager would be called an instar 3. The number of instar stages can be different depending on the type of insect.

At the end of the larval stage the insect will make a hard shell and inside it will become a pupa. At this stage the larva will stop eating and moving. The pupa appears lifeless, but one of Nature’s most amazing transformations is happening. Inside the pupa, the larva’s body will completely change into a fully grown adult.  Once the adult leaves the pupa it slowly stretches out and relaxes under the sun for a couple of hours while its exoskeleton dries out and hardens. 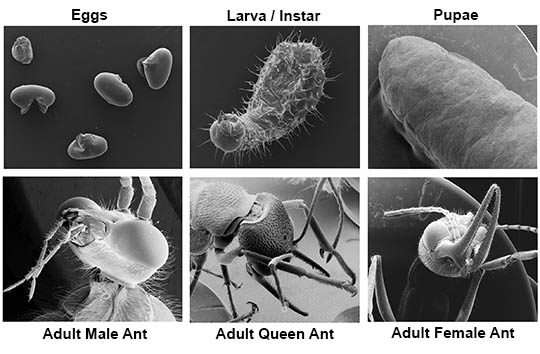 Ants begin as an egg then go through many instar/larval stages and a pupal stage before becoming adults. There are three possible adult forms that an ant can become: male ant, queen ant, or female ant. These images are from a scanning electron microscope. 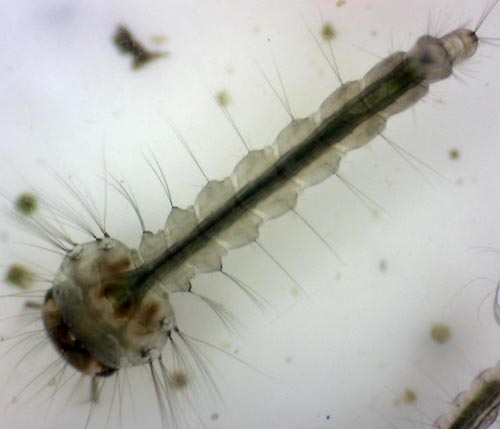 Mosquito spend part of their lives as wingless larva living in pools of water.