Greedy: eager to have something; using more of a resource than you need.

Symbiosis: a relationship between two different organisms that can be, but is not always helpful for both organisms... more

Tend: to oversee, care or watch over. A farmer tends a garden. A parent tends to a sick child.

Bulldozers, flash floods, an army of elephants... these are the powerful forces that control landscapes. Only gigantic energy can turn grasslands into forests or determine which trees grow where, right? The biologist Elizabeth Pringle disagrees. She thinks that even the smallest things—the teeny tiniest things—might be in charge. 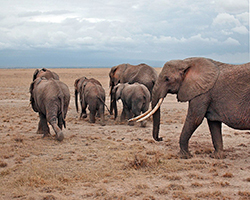 The trees these elephants eat may be controlled by much smaller animals—ants. Image by Sandro Senn.

In the grasslands of Kenya, that army of elephants isn’t just a hypothetical. The wild elephants who live there love eating plants, and they will often tear trees up to get at the tasty leaves. Enough elephants can flatten a small forest to the ground. But sometimes there are groups of trees that even the elephants will not touch.

To find out why elephants ignore these trees, all you need to do is lean against their bark. OUCH! They are swarming with angry, stinging ants. Colonies of ants defend the trees they live in, even when an elephant grabs a trunkful of its leaves. Imagine ants crawling up your nostrils and biting the inside of your nose! No wonder elephants stay away. Ant colony: 1, world’s largest land animal: 0. 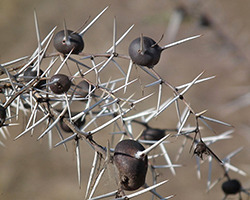 Many acacias have hollow thorns that can house ants. Click for more detail.

These acacia trees and the ants that live in them have a symbiotic relationship called a mutualism. The trees make sugary nectar for the ants to drink and special hollow thorns that the ants can live in. Almost as a form of “repayment” (but also to protect their homes), the ants will defend the trees from animals big and small that try to eat the leaves. This sort of ant-plant cooperation is actually pretty common. It happens with different ants and different plants all across the world.

The mutualism between the trees and their tiny ants determines which plants live and which ones get eaten. The whole grassland can look different because of the work of these small insects. But what if there was an even SMALLER piece of the puzzle that was changing the landscape? Pringle’s research team thinks they might have found it. 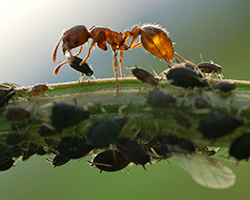 See, although the ants and the trees do things to help each other, there is a third species that binds them together even tighter. It turns out that many ant species will tend tiny herds of plant-sucking insects, similar to how humans keep dairy cows or goats that make milk. These aphids and scale insects (they’re closely related to each other) attach themselves to plants and bore tiny holes right into the stems. Then, they drink the sugary water inside a plant which acts as the plant’s blood.

But the more liquid they drink, the more liquid they have to… well, pee out. Scale insects and aphids produce big droplets of a sweet, sugary liquid called honeydew. And you know who likes sugar? Ants do. Instead of eating their little plant-sucking insects, ants will take care of them and drink the honeydew that comes out their bottoms. Gross, but delicious? 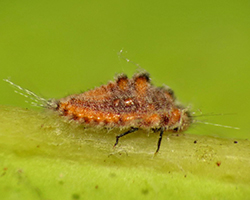 Scale insects can range from extremely small, to "giant," when they are several times larger than the ants they may live with. This is a giant scale insect from Spain. Image by Katja Schulz. Click to enlarge.

Pringle’s team found that these miniature herds help the trees communicate with the ants. If the tree wants to reward the ants, it can change its sap to be sweeter. These energy-boosting sugars get passed on from the tree through the aphids and scale insects, into the honeydew, and then to the ants. Without these “middle-men” passing on the nutrients, the ants are less defensive and less energetic. When the ants become tired, the tree is more likely to be eaten by elephants.

But it’s not always sunshine and roses between these partners either. The trees might be able to send “punishments” through the plant-suckers as well. The toxic, nasty-tasting chemicals that plants like milkweeds make are also passed on through honeydew. If the ants get greedy and start taking too much sugar, the trees could start putting these yucky chemicals in their sap and put the ants back in their place. 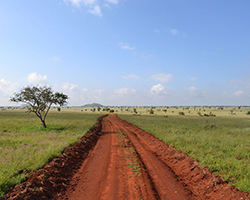 A whole landscape could be affected by tiny insects and worms. When you're ready to explore more of the savanna, visit our Savanna Biome Tour.

So the whole savanna might depend on the teeny, tiny scale insects and their aphid cousins. They help plants pass on messages and rewards. This then helps keep the ants in line, and the aggressive ants help keep elephants away. And when the elephants are kept away, they eat different plants and the whole landscape changes!

In trying to understand the relationships that can control whole environments, some people might stop here. But not Pringle. She has just finished another experiment with plants, ants, aphids… AND microscopic worms called nematodes. These little creepy-crawlies can infect the roots of plants, and when they do, they change which chemicals the plants can make. She found that (okay, hold on to your hat) the nematodes affect the plant, which affects its chemicals, which affect the aphids, which affect the ants, which affect the elephants! It seems like every time we look smaller, there’s another level of control. 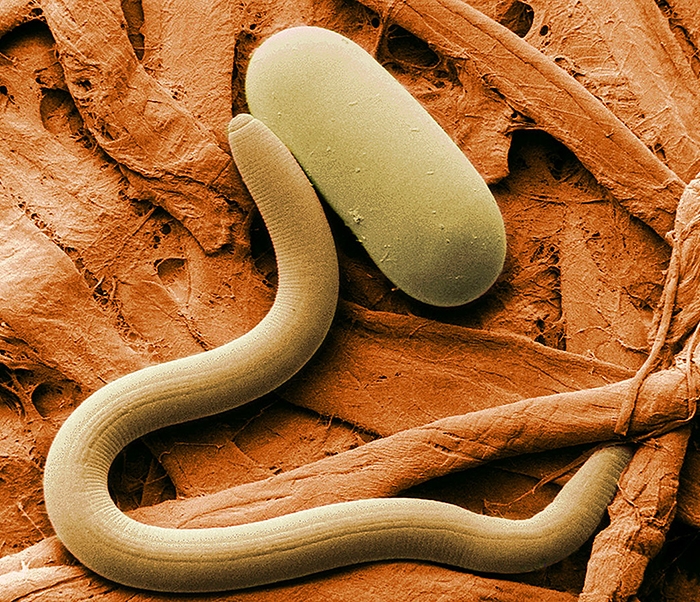 Sometimes tiny things can have large effects. Could microscopic worms be driving patters of tree growth in some habitats?

Learn how water can affect the relationship between plants and ants in our research story on Pringle's work, Trees Get By with Ant Aides.