Assemble: to connect or bring together; to build something.

You buy a set of Legos and bring them home, open the box, and pour them out on the floor. In front of you there are thousands of pieces, no instruction manual, and a picture of a roller coaster. Before you can even pick up a piece, you watch as the pieces start to assemble themselves in a matter of seconds, all on their own! After this self-assembly is finished, a beautiful, small roller coaster is sitting before you.

Now imagine the same situation, but on a nanoscale. “Nano” is much smaller than Legos, smaller than your skin cells, even smaller than your cell parts. Nano is on the scale of molecules. Nicholas Stephanopoulos works with molecules, and gets them to self-assemble much like those imagined Legos. In fact, the building blocks he uses are biological molecules so small we can’t even see them without the help of powerful microscopes. Some of the molecules he uses are DNA.

We have studied DNA enough to know how it interacts with itself. We can even predict ways it will move and attach to itself. But when proteins are mixed with DNA, we still aren’t sure what movements or structures to expect. Proteins are used by organisms to build all kinds of things, from gateways in and out of cells, to structures within cells, to tiny “machines” that perform specific tasks. Stephanopoulos’ work shows that we can use DNA to build a structure, then add proteins to it to make the structure perform specific tasks too. If this is starting to sound a bit like a tiny machine, that’s the point. Stephanopoulos is using this idea to make it possible to make nanoscale things like cages, fibers, and tiny robots! 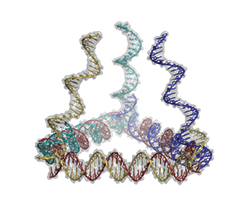 Researchers know how to build structures entirely made of DNA, like this illustration of one. But Stephanopoulos is seeing what happens when we use proteins and DNA to build.

So, how exactly do researchers make a nanorobot? The first step is one of the hardest parts and requires the most time: understanding the materials. Figuring out the rules of how DNA and proteins interact is tough, but necessary in order to build these nanoscale devices. This is because building nanoscale devices doesn’t work the same way as building something at a normal scale.

A Cage that Builds Itself

Imagine you want to build a cage to protect a plant growing outside your home. You could choose to make your cage out of wood, metal, plastic, or stone. You could use any of those materials in a way that would make the right shape to build a cage. But on a nanoscale, you can’t change the shape of molecules with your hands.

If you want to make a nanoscale cage, you would have to use biological materials that you already know will make the shape of a cage on their own if you put them together. You can’t force these materials to move in the way you want, but instead have to pick the right ones that will act that way on their own. For this reason we need to understand how they work on their own before we can use them to make what we want. 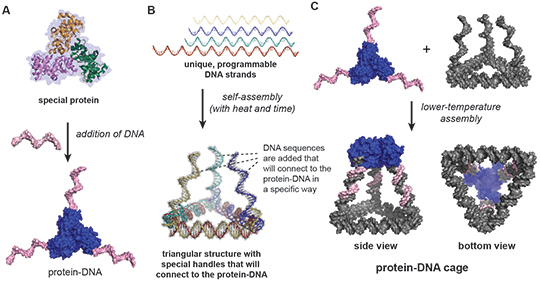 Here is an example of how a protein-DNA cage could be built. Click for more information.

Once we have the fundamental knowledge of how these molecules interact, we can begin combining them to solve all kinds of problems in our world. For example, one big problem with medicine is that when you take a pill, the medicine doesn’t just go where you want it to. If you have a headache and take painkillers, your body doesn’t just send all of the medicine to your head. Instead, the medicine moves throughout your whole body, including your head. Your headache goes away, but the medicine is also acting on many other parts of your body at the same time. This may not sound so bad, but some medicines are good at solving one problem but are bad for other parts of your body. These other effects which doctors didn’t want to have happen are called side effects. Side effects are one area where a nanoscale machine could help. 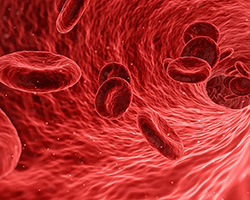 Could nano medicine travel through our bloodstreams, but only affect very specific cells?

Imagine if we put medicine into a tiny cage, so small that the whole cage can move through your body. While the medicine moves around, that cage would make sure the medicine doesn’t touch anything it isn’t supposed to. A protective cage like that would prevent some side effects of medicines. But how can medicine in a cage do anything?

Well, we can also make a door on that cage which will only open if the cage touches something specific, like a type of cancer cell. When the cage touches that cancer cell it will open up and the medicine will come out, meaning the nanomedicine will only work where we want it to. This is just one way a nanoscale machine could be used to help solve challenging problems in the world, but the applications are endless. These molecules may be so small we can’t see them, but the impact they have on our medicine, engineering, and knowledge is gigantic. 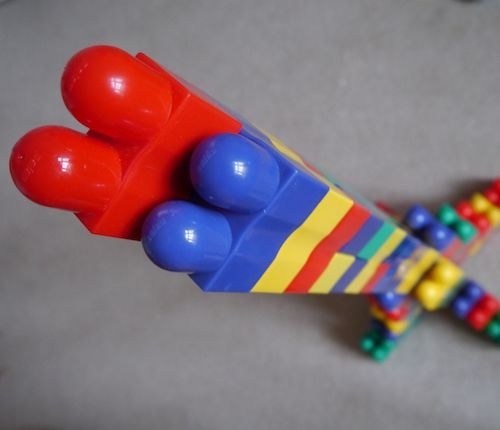 What if these toy blocks were so small that you couldn't pick them up or put them together? Is there any way to build structures that small?

Learn more about the rules of self-assembly and how to build at a nanoscale in Nature's Tiny Machines.

Try your hand at building in a nanoscale fashion with colored blocks in our game Nano Building.