Acute: very sensitive to specific stimuli (input) such as light and sound.

Legally blind: if a person has to stand 20 feet or closer to recognize an object that a normal vision person can see from 200 feet, that person is legally blind (20/200 vision).

Ommatidium: the cone-shaped parts of an insect eye. Each ommatidia has a lens on the end to gather light... more

Resolution: the ability to distinguish objects that are close to each other as two separate objects.

Butterflies Are Legally Blind - How Can This Be? 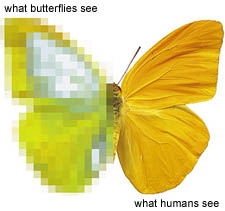 As you watch a butterfly navigate the flowers in your back yard, or a pesky fly avoid your flyswatter, keep in mind their vision is quite different than yours and mine. In fact, most insects are legally blind, but you would not know it from looking at them.

You don't see insects constantly crashing into walls, flapping into pedestrians, and bumping into each other. No, but did you know that they see the world with eyes that are very different from ours? So if insects are legally blind, you might think insects would never find their way through life. However butterflies, like all insects, are well adapted to navigate through the natural world. Insects far outnumber most other animals, including humans. How is it then, that insects are legally blind? Butterflies and other insects are considered blind because, according to human standards, they cannot see fine details, referred to as poor resolution. Insect resolution is 100 times worse than that of humans. Why is insect vision so different from our own? The key to understanding insect vision begins with their unique eye structure.

Looking at an insect's eye under a microscope you will see an eye made up of hundreds of tiny six-sided lenses. Each lens sits on top of a long tube, called the ommatidium. These ommatidia are packed with special cells whose job it is to catch light from the environment. The special cells are called photoreceptors. The more light reflected off an object, the easier it is for an insect, or any other animal, to form an image of that object. This makes sense if you think about it. Reading a book or catching a ball is hard to do if there isn’t enough light.         Insect eyes can have as many as a hundred ommatidium that work in a similar way as the dots that make up the television or computer screen. Each dot on the television is not able to give a clear picture of an image. However, large groups of dots like those on an entire screen can be combined into a clear image.

Why are insects legally blind? Why is it that insects cannot see a computer screen exactly as we can? The answer can be found in those tiny tubes called ommatidia that make up compound eyes. At the top of each tube lies a small lens. When light enters a small opening, such as these small lens openings, the light bends in a process called diffraction. Insects could avoid this problem by growing huge eyes made up of many large lenses. So, flies could grow huge eyes with super-insect vision and read the newspaper if they felt like it. However, such an impressive insect would have to divert so much energy to maintain and carry its eyes, little else would get taken care of, like finding food or avoiding the resident spider. So insect eyes need to be able to do many different vision functions that seem to be in conflict. 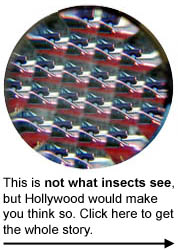 Flies, and other insect eyes solve this conflict with a compromise. The compound eyes of insects are able divide the work between different parts of the eye called “acute zones.” For example, male houseflies grow really large lenses in the front of their eyes. These oversized lenses help them track female flies during flight. Dragonflies practice a sit-and-wait strategy for capturing their insect meals. They have acute zones in the top of their eyes that they pack with more than the usual amount of lenses. While sitting on a cattail, a dragonfly uses her acute zone to zero in on unsuspecting insects that fly overhead, silhouetted against a bright sky.

Even though insects have compound eyes, they do not see multiple images that are often shown in Hollywood movies. Most science fiction movies would have you believe that all insects are seeing ten to a hundred of the same image. In reality, insects see only one image, just like you and I see one image. However, they do not see things as clearly or even with same color vision we have.

Does it matter that insects see so poorly they would fail an eye exam at the doctor’s office? Probably not. Insects do not need high quality eyesight such as the kind you or I have. Instead, they just need to get enough visual information from their environment to find food, shelter and a mate. So an insect may not pass an eye exam, but it certainly has good enough vision to dodge your flyswatter.

Read more about: Did You Know Butterflies Are Legally Blind? 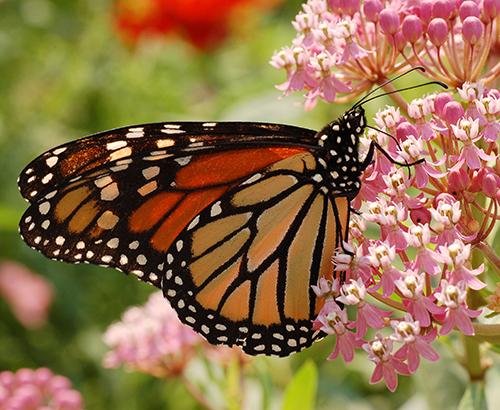 Could it be that butterflies don't see as well as humans?

Did You Know Butterflies Are Legally Blind?