Cannibal: an organism that feeds on other members of its species.

Crustacean: an animal with an exoskeleton, and gills for breathing. Crustacean bodies are often divided into distinct segments. Examples of crustaceans are lobster, shrimp, and crabs... more

Kin: family, a relative like your mother, father, or sister and brother.

Cannibals in the Water 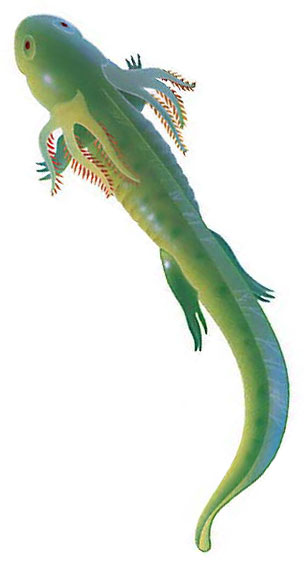 While cannibalism is fairly common among insects and crustaceans, most backboned animals avoid feeding on their own kind. The tiger salamander of the arid Southwestern United States is another case entirely.

Tiger salamanders begin life by munching aquatic crustaceans and insects. But about four weeks after birth, some of the creatures develop wider heads and enlarged teeth. "Then they make their living preying primarily on other salamanders," says James Collins, a professor and chair of Arizona State University's Biology Department.

Studies conducted by Collins and Cornell University's David Pfennig show that salamanders growing up among relatives are less likely to become cannibals than those raised with non-relatives. Their results are published in the April 29 (1993) issue of the international journal Nature.

The research supports the "Inclusive Fitness Theory." This theory provides an explanation as to why cannibalism is the salamander's method to help its relatives. When the salamander becomes cannibalistic, and eats non-relatives, it removes some of the competition for valuable resources. As an example, by eating the non-relatives, the relatives have more food available.

But how can a salamander tell if another salamander is a relative (also called kin)? Continuing studies suggest that smell could be the way salamanders distinguish kin from non-kin. "In many instances these animals live in aquatic habitats that will dry before the end of summer. The animals are engaged in a race with time, and they have to complete their development before the pond dries," Collins says. "One way to accelerate development is to feed on a prey item that is high in protein and is sitting there right next to you in the pond." 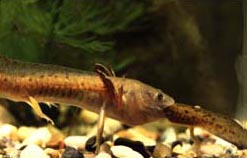 Some salamander larvae eat other salamanders of their species.

A salamander is more likely to harbor bacteria especially lethal to other salamanders. "Hence, cannibalism is expected to be less frequent in populations where disease is prevalent."

Collins is currently conducting further research to test the theory that kin, in turn, harbor disease-causing organisms that are more virulent to kin than non-kin. Tiger salamanders live in mountain meadow ponds at elevations between 5,000 and 9,600 feet. Adults resemble small catfish. They can grow to a length of just over a foot.

"Once you get west of the Mississippi River, this is the top predator in standing-water systems," Collins says. In the West, plankton forms the base of the food chain, progressing to aquatic insects, typical salamanders, and then cannibalistic salamanders. Tiger salamanders are the only species of vertebrates that have distinctive physical traits associated with their cannibalistic behavior. Scientists still don't know whether all salamanders have the potential to become cannibals.

Read more about: He Ain't Tasty, He's My Brother 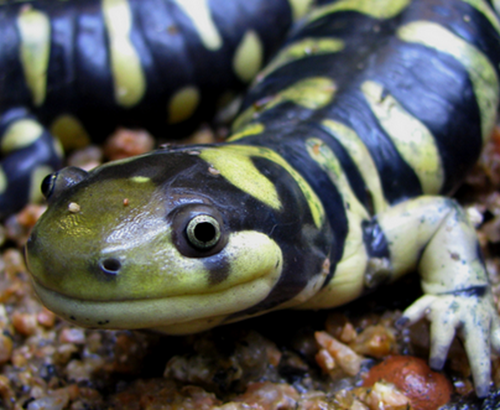 He Ain't Tasty, He's My Brother