Biomolecule: the functional molecules in a cell; they consist of proteins, carbohydrates, nucleic acids (DNA and RNA) and lipids (fats).

Biopsy: examining a sample of tissue or fluid to look for any abnormalities ... more

Incubator: a device that looks like a special refrigerator that is used to maintain the best temperature, humidity and other conditions for growing and maintaining living things such as cells and small organisms.

Lymphatic fluid: a fluid that flows through the body, separate from blood, and contains white blood cells, proteins, and other nutrients......more 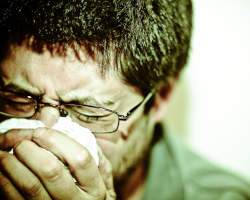 Being sick is never fun. But how were medicines created to help with this? Image by Sergio Alvarez via Flickr.

Let’s try to remember the last time we were sick, shall we? Maybe it was a seasonal flu, or an episode of migraine, or a food allergy. Whatever the illness, there was most likely some medicine that came to our rescue. Fast forward a few days and most of us forgot that we had ever been sick. Our medicines indeed worked like a charm!

But how were these medicines created in the first place? To create a medicine, scientists first must understand how our cells act during an illness. Then, they must test out different chemicals that could change the behaviour of those ‘sick’ cells. But scientists would need living cells to perform these experiments. Where can one get such cells? This is where tissue culture comes into the picture. 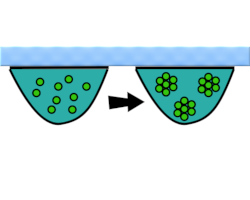 The hanging drop method is a technique where cells are grown in a small drop of nutritional fluid. This drop is then suspended by gravity from a glass surface. This technique helps better observe the cell’s structure. Image adapted from Declan Riordan.

For a long time scientists have worked to understand the little universe that exists within our cells. Ross Harrison, who lived in the early 1900s, was one such scientist. He was mainly interested in nerve cells and how they grew in the early stages of embryonic development. But just like many other scientists in that era, he bumped into a big challenge - how would he study these cells?

After many failed attempts to grow nerve cells in different kinds of solutions, he finally decided to get a bit creative. He tried to grow the cells in a drop of lymphatic fluid, suspended from an inverted glass - a method that came to be called ‘the hanging drop method’. The lymph that held all the essential nutrients acted as a nutritious broth for the growth of the cells.

When he viewed these cells under the microscope, he was able to study them without surrounding tissues blocking his view. Harrison’s experiments helped us learn the basics of how nerve cells develop. Perhaps more importantly, they opened the path for us to learn how to culture animal tissues.

What is tissue culture? 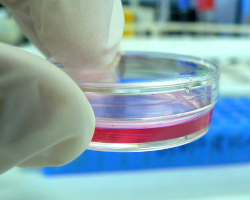 A tissue culture dish with media (a liquid or gel that holds cell food) for the culture of cells. Image by kaibara87.

Tissue culture is one of the major tools used in biological research. This is because cells grown in tissue culture behave similarly to the organism they are taken from. Studying the cells can help us indirectly study the organism. But how do we grow or ‘culture’ cells? The cells in our body are part of an intricate framework. Oxygen and nutrients are supplied by the blood, and temperature and pH are controlled by complex processes. In order to grow our cells in the laboratory, we need to somehow recreate this complex system. Although this may seem difficult, scientists have been successfully doing this for many years now.

These are human embryonic kidney cells under a microscope. These are stained red and green, to help you see different parts of the cells. Click for more detail.

A scientist first extracts cells from the organism, for example from a patient biopsy sample. The cells are then placed in a tissue culture dish made of plastic or glass. The cells attach to the bottom of the dish and start dividing, spreading across the 2D surface of the dish. The growth of the cells depends on the following factors:

How has tissue culture helped us?

Being able to isolate our cells and study them in the laboratory has helped us learn about cells and diseases. Without tissue culture, we wouldn't know as much about cancer, heart disease, and diabetes, for example. These diseases may have been a death sentence a few decades ago. Instead, we now have many medicines that can either cure these diseases or slow their progress. 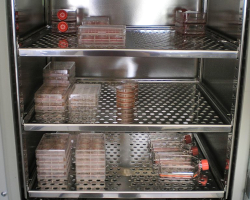 Incubators help maintain the temperature for the growth of cells. Incubators like this one help scientists grow tissues to study many different sorts of diseases. Image by Shinryuu.

Up until the 1900s, infections like polio and measles were famous for taking millions of lives. Today we are still at risk of viral infections like COVID and too many types of influenza or flu. Tissue culture has helped us better understand many viruses like these. It has also helped us make powerful vaccines against many of them.

If growing cells in 2D weren't innovative enough, we now have technologies where cells can be grown in 3D!  This has given birth to the field of tissue engineering, where the aim is to make tissues artificially in the lab. These tissues can be used to treat injuries as well as diseases like diabetes.

Talking about innovation, 3D tissue culture has also made it possible to engineer products like meat, fish, and dairy foods. This is hoped to help reduce the environmental impact of these industries. Tissue culture has indeed opened our eyes to the bustling life inside our tiny cells and the immense possibilities that come with it. 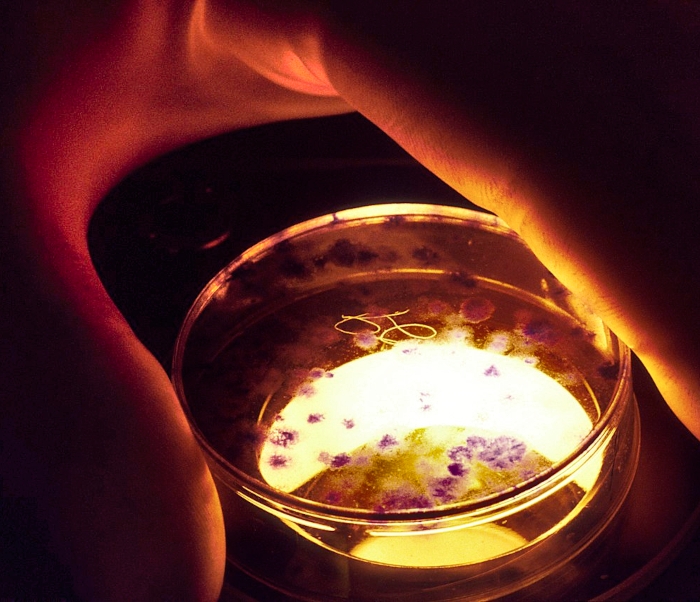 We use tissue cultures to understand how cells work. Here a scientist is studying hamster cells grown on a petri dish.