Aggregate: when smaller parts combine to form a larger group or object. 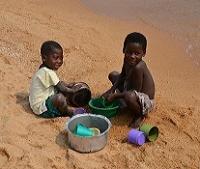 Helping someone do dishes or finish other chores could be seen as making a small sacrifice of time and effort for them.

Having brothers or sisters can be great, but sometimes it means you have more responsibilities. You may have to share food with them, spend time helping them with their homework, or even do chores for them. These are all things that someone could do even if they did not benefit from them. They would be making a sacrifice for that person. People often make sacrifices. Many times it is for a family member or someone close to the person making the sacrifice.

Humans are not the only organisms that have families. Many other organisms have families too, including a type of amoeba that we can call the social amoeba. In the PLOS Biology article “Kin Discrimination Increases with Genetic Distance in a Social Amoeba,” scientists studied social amoebas and whether this simple organism might make sacrifices for its family.

The Life of a Social Amoeba

Imagine playing kickball on a team of one. You’d have to pitch the ball, be in the outfield to catch it, and run in to tag runners all by yourself. Because it is impossible to do all of these things at once, you would probably lose the game. That's why working together with others can be very important. 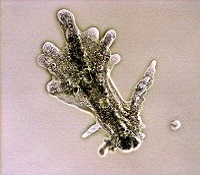 Although most amoebas live alone (like this one), social amoebas gather together to improve their chances to survive.

When there is no food available for the social amoebas, they will aggregate. By aggregating, the separate amoebas can join together to create a larger organism that can move to a new place that has more food.

So that they can move to a new place quickly, the social amoebas will form a fruiting body. This fruiting body is a round ball of amoebas. You can think of it like the top of a dandelion, the flower you can blow on to send all of its white seeds into the wind. The amoebas will gather together to create a round ball that helps them take off and travel by wind to new places. Usually social amoebas separate randomly when they travel, spreading the family of social amoebas out over several new homes.

In order for social amoebas to come together and make a multi-celled organism with a fruiting body, some of the amoebas must make the stalk, which is similar to the stem of a flower. These social amoebas don’t get to be carried away on the wind. Instead, these social amoebas sacrifice themselves so that their amoeba relatives can float away and survive. The amoebas that stay will likely die, so this is a large sacrifice, but they make it so their family members can continue to live. If the amoebas making the stalk didn't make this sacrifice, then all of the amoebas would die. So it is better for the family of amoebas to form a fruiting body, even if it means some amoebas have to be left behind.

Have you ever worked on a group project in school and someone in your group didn't do their fair share of work? They still get the same grade as you, but they didn’t spend the same time working on it, so that person could be called a cheater. Amoebas have to deal with cheaters too. Sometimes when a family of social amoebas forms the fruiting body, other types of amoeba try to take advantage of this. These other amoebas will try to join the fruiting body to move to a new place to survive, even if they didn’t help the social amoebas to form the stalk.

In other words, they are cheating and benefitting from the sacrifice of the social amoebas. The social amoebas have found a way to survive, but they only want to make a sacrifice for their family, instead of outside cheaters.

So in order to stop the cheaters, how do the social amoebas tell which amoebas are part of their family? 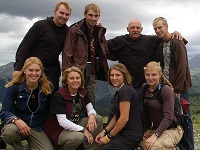 All of these people are part of the same family, which means that each person's genes will be similar to the rest of the group's genes.

One way to tell a family member apart from a stranger is to look at genes. Families, including yours, have a lot of the same genes. For example, you are a 50/50 combination of your father and mother’s genes. This makes you genetically similar to each of your parents. 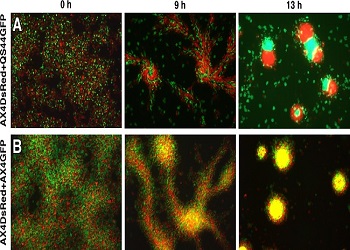 This group of images show that some amoebas prefer to hang out with family. Click on the image for the full story.

The ability of social amoebas to stop most cheaters from using their fruiting body is important to their survival. Different amoeba types compete for the same food and resources, so blocking cheaters makes social amoebas more successful. Scientists aren't sure how the amoebas figure out which amoebas are relatives or cheaters, but they seem to have found a way to make sure they only sacrifice their lives for the good of their family.

Additional images from Wikimedia Commons and the National Science Foundation. 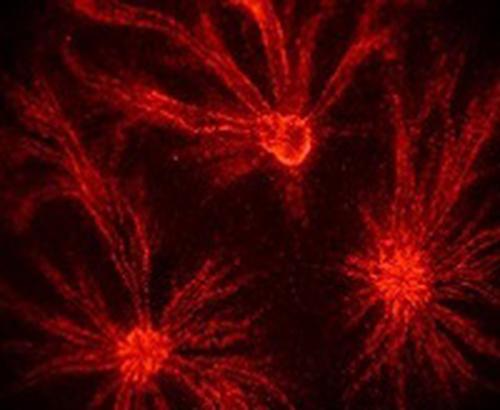 Social amoebas gather together to help each other when food is scarce.