Cell damage: changes to a cell that result from environmental stress (both outside and inside a cell)...more

Cell division: when a mother cell divides into two or more daughter cells...more

Cell lineage: a family line of related cells (a mother cell and its daughters and granddaughters and so on)....more

Chaperone protein: a special type of protein that helps other proteins in a cell to fold correctly...more

Inherit: when a new generation receives something (physical trait, money, etc.) from a parent generation. 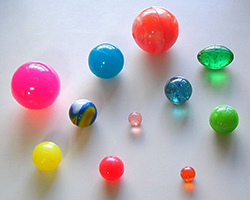 Bacteria can become damaged over time, just like a bouncy ball. Image by 高橋 宗史.

You are holding your favorite bouncy ball. It’s bright and colorful and you hope it will last forever. But each time you bounce the ball, it becomes a little bit damaged. Over time, your ball would become so damaged it would break. What if you could move the damage onto a different ball, allowing your favorite ball to last longer?

Bacteria deal with damage in a similar way. However, bacteria don’t transfer their damage onto a different cell. Instead, the damaged cell splits and divides its damage between two new halves. This results in two “daughter” cells with less damage than their “mother” cell had. 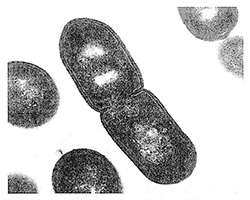 When the mother splits in half, we might assume each daughter cell would inherit half the damage of the mother cell. If the cell gets more damaged during its life, future cells would inherit even more damage. Eventually, all the cells would become so damaged they couldn’t reproduce anymore. Instead, scientists found that bacteria split this damage unevenly. One “old” daughter inherits most of the damage, while the other “new” daughter inherits less damage. In this story, “old” and “new” refer to these two types of daughter cells, not to their actual ages.

In the PLOS Biology article, "Cell aging preserves cellular immortality in the presence of lethal levels of damage,” researchers studied how bacteria can split damage unevenly when dividing. This may solve the problem of too much damage building up in a cell.

Researchers grew E. coli bacteria under normal, non-damaging conditions. First, they wanted to confirm that cells are damaged naturally as they age. Then, they wanted to find out if the cells split this damage evenly between their daughter cells. They watched the bacteria for 24 hours and recorded how quickly they reproduced. 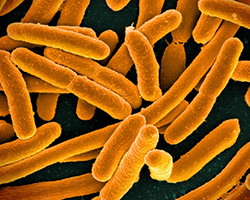 How fast a cell can grow and divide depends on the cell’s amount of damage. Therefore, the scientists could figure out how much initial damage the mother cells had based on how fast they divided. By timing how quickly the daughter cells divided, they were also able to estimate how much damage was given to each daughter cell from the mother.

These results confirm that bacteria are damaged naturally with age. This damage is then divided unevenly between the daughter cells. Specifically, they found that the old daughter cell receives around 63% of its mother’s damage.

How Do “Old Daughters” Survive?

Next, the researchers wanted to figure out how the old cells deal with inheriting more damage. 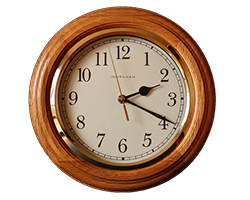 The amount of damage a bacterial cell has affects how long it takes to divide. Scientists found how much damage cells had by measuring how long they took to divide. Image by Capri23auto via Pixabay.

The scientists calculated how much damage each cell had at “birth” based on how long it took to grow and divide. They found that the old daughters inherit the same amount of damage the mother had at birth. Because this amount is too low to kill the cell, the old daughters can still survive and reproduce.

They found that if the bacteria were too damaged too quickly, the old daughters would stop dividing and die. However, the new daughters would survive and continue to divide. Scientists refer to mother cells and their daughters and granddaughters (and so on) as cell lineages. Cell lineages that stop dividing and die off are called mortal. Lineages that survive and continue to divide are called immortal.

A Closer Look at Damage Division

Next, the researchers looked into how cells divide their damage unevenly. To do so, they needed a way to see where damage begins and ends in the cell as it divides. The researchers knew that that “damage” is made up of clumped, damaged proteins. When proteins are damaged, another type of protein called a “chaperone” finds and tries to fix them. 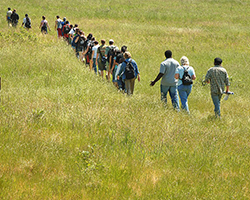 Protein chaperones help take care of other proteins, just like a parent chaperone help watch children on a field trip. Image by the forest service.

On a field trip, you might have had an adult called a chaperone with you in case anything goes wrong. Protein chaperones work in much the same way, keeping other proteins out of trouble. To see the damage in a cell, the researchers colored the chaperone proteins yellow. Then, they used a special microscope to see where the yellow chaperones found the damaged proteins.

They found that damage begins in the center of the cell and moves around freely. As damage increases, most of the damaged proteins move to one side of the cell. When the cell divides, that side becomes the old daughter, with more of the damage. This is how the bacteria unevenly divide damage between daughters.

Too Much Damage for Bacteria

The researchers wondered how much damage was needed to cause the cells to become mortal and stop dividing. To test this, they used light, heat, and drugs to damage the cells. 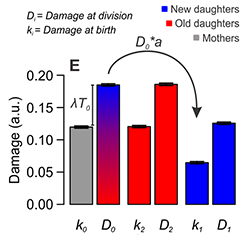 This graph shows how damage builds up over a cell’s lifetime. It also shows how that damage is split between two daughters when the mother cell divides. Click for more detail.

The scientists predicted that the more damaged a cell becomes, the more unevenly it will split this damage between its daughter cells. By doing so, bacteria would sacrifice the old daughter and give it more damage than normal. This would allow the new daughter to receive a smaller amount of damage and survive.

Instead, they found that cells with extra damage split that damage more evenly between old and new daughters. More damage results in a more even distribution of damage. One explanation for this is that damaged protein clumps might not have enough time to gather at one side when damage occurs too quickly. Another possibility is that the old cell side becomes too full to hold more damaged proteins, so they end up somewhere else in the cell. Regardless, the new daughters still survived better than the old daughters with these high damage levels.

Could Humans Become Immortal Too? 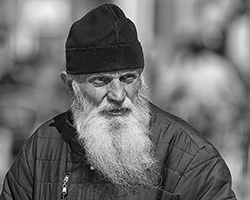 Studying bacteria may help us understand aging in humans. Image by Ladhra.

We usually think about how aging works for humans or animals. However, it can be hard to study the specific details of aging in such large organisms. Instead, this study uses millions of tiny bacteria to study aging. This allows the researchers to gather a lot of data that can be used to create mathematical models of aging. 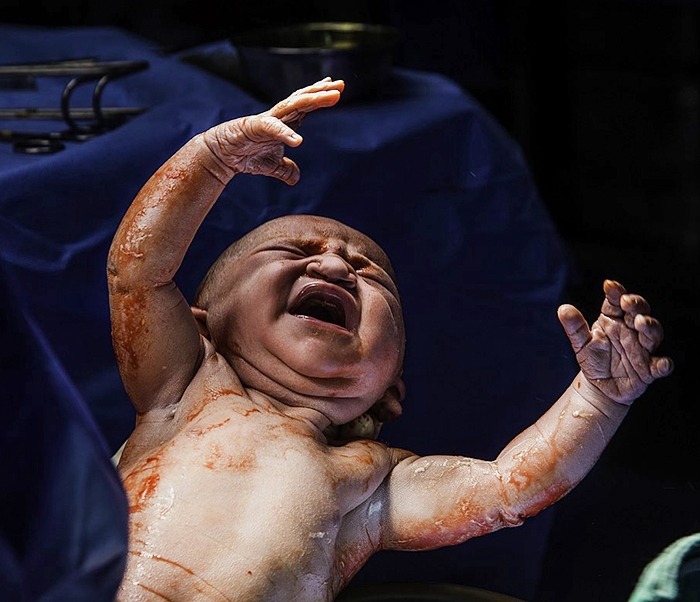 As soon as we are born, our cells begin to age. The same is true for other organisms, and it's something we haven't figured out how to stop. How, then, can single cells like bacteria pick up damage as they age, but still split into new cells that are less damaged than their "parents" were at birth?
Cell aging preserves cellular immortality in the presence of lethal levels of damage
Learn how to read a scientific article