Innovator: an animal that comes up with a new behavior that no other animal in the group has....more

Social learning: when animals learn by watching and copying the behavior of other animals in their group....more 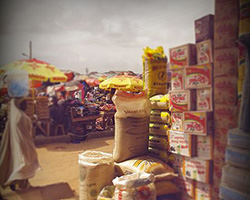 A market in Nigeria. Image by Owesoweshi.

You open your eyes and suddenly realize you are in a far-away land. People are wearing clothing you don’t recognize and speaking a language you do not understand. A light wind blows through the town square as people push carts past you. The streets are filled with new smells, coming from foods that taste like nothing you’ve ever imagined. Everything here seems strange to you, because you are visiting a people with a different culture than what you are used to.

Culture can be defined as behaviors that are passed from one organism to another through social learning. Humans possess culture. Can other animals have culture? Some scientists look for signs of basic culture in other animals. What they have found may surprise you. So far scientists have found signs of culture in a variety of animals; these animals include chimpanzees, bonobos, birds, whales, and even rodents. But these are all vertebrates—what about other animals, like insects?

Many people think insects are too simple to have culture. Is this true? That is the question asked by researchers in the PLOS Biology article, “Associative Mechanisms Allow for Social Learning and Cultural Transmission of String Pulling in an Insect.”

An Important Part of Culture

A chimpanzee grabs a long thin branch and starts pulling off its leaves, stripping it down into a bare “fishing rod.” She pokes the tool through the opening in a termite mound, and pulls it out again. As the tool comes out, several termites are biting the branch, and she bites them off and eats them, one by one. Chimpanzees learn termite fishing from other chimpanzees. 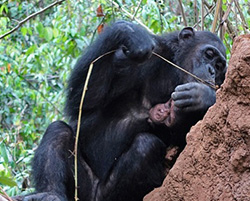 A chimpanzee fishing for termites. Click for more detail.

Have you tried learning a skill from your parents? For example, if you learned to ride a bike, you probably fell down and scraped your knees a lot. Young chimps are the same way, when they try to fish for termites they don’t get very many. But they keep watching their elders and eventually learn to get more tasty termites. The experience of sharing knowledge and skills is an important piece of culture.

Another big piece of culture is that learning is passed between many generations. If the first chimp that learned how to fish for termites never showed another chimp, that wouldn’t be considered culture. Have you ever noticed that your family is very different from other families?

Some families cook different foods, or eat using different utensils, like forks, chopsticks, or their hands. Chimps are the same way, termite fishing rods aren’t all the same. Long ago, some innovative chimpanzee modified the end of their rod into a brush. This new design was then shared and passed down within that social group. This shows that chimpanzees have at least these important pieces of culture.

The Buzz About Bees 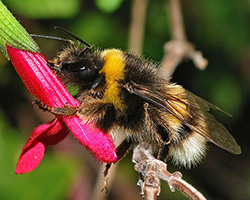 Bumblebees drink nectar from flowers, a behavior that scientists used to train them to pull strings. Image by Alvesgaspar.

However, string pulling is not a normal behavior of bumblebees. Wild bumblebees do not pull strings to get food. In the study, scientists changed this. Scientists attached strings to fake flowers that they put under tiny tables. The only way for a bumblebee to get the sugar syrup was to pull the string. Seems easy, right?

Not for the bees, because only 1% of bumblebees could figure this out on their own. These bumblebees are called innovators, because they came up with a new idea or skill without learning it from another bee.

How Smart Bees Get the Cheese (Or Syrup)

Innovative bumblebees are rare, but the ability to learn is more common. Bumblebees can learn this skill when trained through a series of steps. Scientists were able to train some bumblebees how to get the syrup. 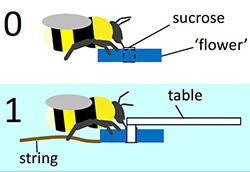 How did scientists train bees to pull strings? Click for more detail.

How did scientists train bees to pull strings? Click for more detail.

To train bumblebees to get the syrup, scientists showed the bumblebees the fake flowers. They then added strings to the flowers and slowly moved them further and further under the table with each training step. Each time, the bee had to pull the flower out from under the table a little more to get access to the syrup.

In this way, the scientists successfully trained 23 of 40 bumblebees. That’s a lot more than the 1% that got it by themselves. But does this mean that bumblebees show signs of culture? Not quite, because the scientists still have to see if the bees can learn from each other. 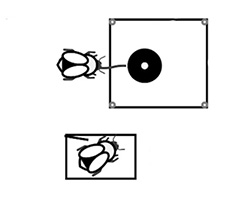 Bees that hadn't been trained were allowed to watch trained bees to see if they could learn string pulling behavior. Click for more detail.

Fifteen of 25 “learners” were able to figure out the string-pulling trick after watching the “teachers”. That’s even better than when the scientists trained them! This shows that bumblebees can learn from one another. But wait, does this mean they have culture now? Not quite, because they also need to pass this behavior down through generations of bees.

Passing a Skill Down Between Many Generations 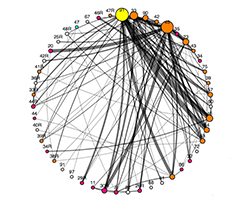 This figure shows the spread of the string-pulling knowledge between bumblebees in a colony. Click for more detail.

It turns out that a bumblebee that learned from another could then become a teacher. This shows that the skill could be passed down between multiple generations. Do bumblebees in nature show signs of culture? That’s something for the scientists to found out next.

Additional images via Wikimedia Commons. Bumblebee with pollen on back by gailhampshire. Bee on zinnia flower by Simon Koopmann. Visit the PLOS article for videos of bees pulling strings. 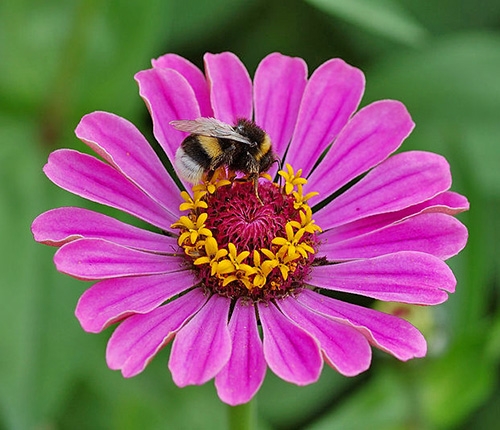 Do bumblebees have animal culture?
Associative Mechanisms Allow for Social Learning and Cultural Transmission of String Pulling in an Insect
Learn how to read a scientific article