Cancer Cells on the Move

Collagen: a white fibrous protein that gives structure and support to the body. It helps make bones flexible.

Collagen Matrix: a web-like structure around cells that provides them with physical support.

Invadopodia: finger-like structures that grow from some cancer cells. 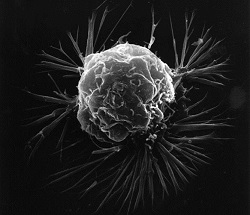 Without eyes, ears, or mouths, cells can still sense and respond to things in their surroundings. Image by National Cancer Institute.

Imagine walking in to your house with a blindfold covering your eyes. Sure, you might bump into a few things but you could find your way around pretty well. The feel of the floor under your feet changes from the soft carpeting of the living room to the hard floor as you wander in to the kitchen. You take a good whiff and smell cookies baking in the oven. Suddenly you hear someone yell “Hello!” from down the hallway. You slowly move toward the sound to see who else is home.

As it turns out, the cells in our body also respond to things in their environment. Though they can't see, they move around by sensing different signals from their surroundings. Cells from a cancer tumor sense signals too, but scientists were unsure how different signals tell the cancer cells what to do. In the PLOS Biology article “Multiparametric Classification Links Tumor Microenvironments with Tumor Cell Phenotype” scientists studied how the balance of signals in a tumor tells cancer cells to move and spread to other parts of the body. 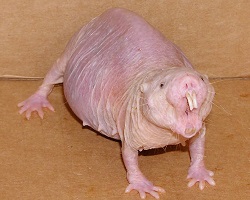 Naked mole rats are one of the few animals that don't seem to get cancer. Image by Jedimentat44.

Cancer is a deadly disease that occurs in almost all species of animals and plants.  Cancer starts with a group of cells that grow and divide more than they normally do.

When cells grow too much, they can form a small ball of tissue called a tumor. Sometimes, a few cancer cells will move away from the tumor. They can enter the blood stream, and spread to other parts of the body. This process is called metastasis.

Signals in a tumor can instruct some cancer cells to detach from their neighbors and undergo metastasis.  For example, host cells (cells of a person who has cancer) that are near a tumor cell might send out signals called growth factors that “tell” the tumor cell to start moving. A group of scientists wanted to understand the combination of signals that gets them moving.

To do this, scientists used fluorescence microscopy to follow the movement of glowing breast cancer cells in mice. Imagine on a field trip to a museum, your teacher has everyone in your class wear red shirts, while the kids from other classes wear green. After a few hours, your teacher can easily see how scattered or how far everyone roamed. The scientists in the study did essentially this experiment with the cancer cells, using fluorescence microscopy. 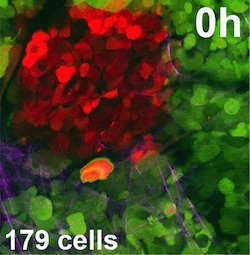 Scientists changed the color of cells so they could follow the cells' movements. Click for more detail.

While watching the green glowing cancer cells under the microscope, they used a special laser to switch a few of them to red. By watching where the red cells appeared after several hours, the scientists found where the different groups of cells were moving. There were cells that were moving fast, but they ended up not moving very far from their original place in the tumor.

Interestingly, there were also slow cells. These cells were able to move much further away. For a cancer patient, those spreading cancer cells spell trouble. Scientists wanted to know how the slow cells were better than the fast cells at moving far away from the tumor area.

Slow and Steady Wins the Race

One of the materials in the tumor environment is the collagen matrix, which looks like a spider web. In some places the matrix “web” is dense and thick but in others it is thin and sparse. The scientists found that in places where the collagen web was sparse, the cancer cells could move fast. In places where the collagen web was dense and thick, the cancer cells moved slowly. Like the story of the tortoise and the hare, the slow cells were much better at spreading cancer than the fast, more aimless cells.

By looking closely at the slower-moving cancer cells, scientists found that these cells were growing finger-like scissors called invadopodia.  Invadopodia allow these slower cells to cut through and destroy the thick collagen matrix around the cell. Invadopodia help cancer cells enter blood vessels, which are surrounded by a thick collagen web, and spread to other parts of the body.

A slow-moving tumor cell grows small projections, called invadopodia, that can cut through a fiber network made of the tissue collagen. Click for more detail.

Scientists wanted to learn what was telling the cells to move either slow or fast. They used a computer program that matched patterns of cell movement with different signals from the environment around them. Some of the signals that the program measured were the density of the collagen web, the size of nearby blood vessels, and the number of immune cells in the surrounding area.

As it turns out, there wasn’t just one signal that could change the behavior of any one single cancer cell. In fact, it was the balance and blend of these signals that instructed them to move a certain way. The balance of signals is unique to different environments.

If scientists could measure the signals of the tumor environment, then maybe they could predict if the cancer cells would move slow or fast. They found that the thicker the collagen web around the cancer cells was, the more likely those cells were to move slowly.

In addition, the closer the tumor cells were to a big blood vessel, the more likely it was that those cells would move slowly. It also means that cancer cells in these areas would be more likely to cross the blood vessel wall into the blood. From there, the cells could and exit and grow in other organs (metastasis). 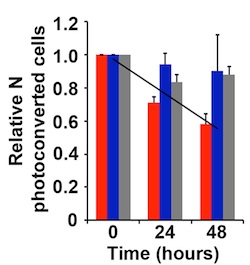 This graph shows the results of how far different cell types moved over 48 hours. Click for more detail.

Imagine your current favorite song—you hear guitar, bass, drums, singing. The mixing of these sounds makes you love the song. If you change how the song was mixed—more bass, quieter drums, slower rhythm—the song sounds totally different. Similarly, the scientists adjusted the mix of conditions around cancer cells. They wanted to see how the cancer cells would respond if they adjusted the balance of signals.

By making the collagen web thicker in some areas, cells that were moving fast would actually slow down.  They even grew invadopodia to start cutting the thicker collagen web fibers. Even though the tissue surrounding cancer cells is complex, these results show that the behavior of cancer cells can be changed by altering the balance of signals nearby. This finding may be the key to better control of cancer in the future.

How Can This Help People with Cancer?

The work from this study shows how important it is for scientists to understand both the cancer cells and what’s happening around them.  By knowing the combination of signals that allows a cancer cell to crawl and spread, doctors may be able to predict metastasis in a cancer patient.  By tipping that balance of signals, a doctor may even be able to stop the tumor cells from spreading.  Stopping tumor cells before metastasis would help doctors treat some types of cancer. 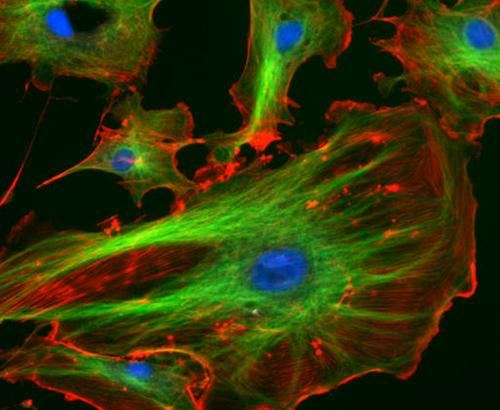 Fluorescent microscopy makes different parts of the cell look like they are glowing.
Multiparametric Classification Links Tumor Microenvironments with Tumor Cell Phenotype
Learn how to read a scientific article