Did you ever think the search for the “fountain of youth” would be found inside our very own cells? There are some scientists that have found that parts of our cells might hold the answer to aging and diseases like cancer. The parts are called telomeres and they get their name from the Greek words telos – end and meros – part. They are end points of chromosomes and help protect chromosomes from mutating. Chromosomes are the instruction set that all cells have. You might have heard them called “DNA.”

Scientists have discovered that every time your cell divides, a little bit of your telomeres are lost in the process. Smaller telomeres decrease the protection your chromosomes have. This might be a reason living things age and get diseases such as cancer. In the PLOS Genetics article "Genetic Anticipation is Associated with Telomere Shortening in Hereditary Breast Cancer," scientists from Spain explain why they think the length of our telomeres can be used to tell if we are more likely to get certain diseases.

The ABCs of DNA and Telomeres

Our DNA is packaged neatly into chromosomes that are shaped like X’s. These Chromosomes are stored in the nucleus of our cells. Click to view larger version.

Take a look at yourself in the mirror. Have you ever wondered why your eyes are a particular color? The color comes from the instructions that are inside each cell called DNA, short for deoxyribonucleic acid. These instructions come from each of your parents. Both your mother and father pass along parts of their DNA that become your DNA. The cells in your body contain your unique DNA — so much of it that it would take a person typing 60 words a minute, eight hours a day, around 50 years to type the entire human genome.

These long strings of DNA are packed tightly into chromosomes, which are shaped like X’s. Each cell in your body has 46 chromosomes. Each chromosome is protected on both ends by long stretches of DNA called telomeres. The telomeres are made of repeating patterns of nucleotides. For example, in humans the telomere pattern at the end of chromosomes is TTAGGG. This repeats over and over again for 15,000 nucleotides.

Why Are Telomeres Important?

Every day, our cells divide in a process called DNA replication. During this process, each nucleotide is copied one by one, so that new cells end up with an identical copy of our chromosomes and the DNA within. The telomeres at the ends of our chromosomes are structures that make sure DNA replicates properly. Telomeres are not copied during DNA replication, but actually become shorter every time our cells divide. Once our telomeres are gone, our cells are no longer able to replicate properly. As you get older, your telomeres become shorter, which can lead to age related diseases, cancer, and cell death.

Scientists study the role of telomeres in different aspects of aging. The discovery of the enzyme telomerase allowed scientists to stop the process of telomere shortening. Enzymes are proteins that are able to accelerate different processes in our body. Telomerase is an enzyme that attaches to the telomeres and protects them from shortening during replication. Telomerase is also able to replace the DNA nucleotides that make up the telomeres. Some scientists imagined that by giving older people telomerase, it would allow them to live longer. Unfortunately, telomerase can cause the growth of cancer cells in older people instead of allowing them to live longer.

The authors of this paper write about possible alternative ways to predict if someone might have a high chance of developing cancer. But what is cancer and why is it so hard to detect? Cancer is a common disease that affects millions of people every year. It is generally caused by mutations in your genes. These mutations can either be inherited from your parents or acquired from the environment. Normal cells know when to stop growing, but in some cancers, genetic mutations cause normal cells to grow and divide uncontrollably.

What Does Telomere Length Tell Us?

These genes perform normal functions in our body, such as controlling our cell growth and protecting our telomeres from telomere shortening. Research has shown that women that develop breast cancer often have mutations in these genes. This group of genes is called the BRCA (BR for breast, CA for Cancer) genes. There are two main BRCA genes – BRCA1 and BRCA2. When these genes are mutated, they do not function properly, and can cause breast cancer.  The mutations can then be passed down through generations.

What Does This Mean for You?

Every day scientists are developing new methods to detect diseases. The goal of these methods is to detect diseases at the earliest possible point, before they have a chance to cause harm. That gives patients the greatest chance of beating a disease like cancer.

The authors of this article have shown that women with inherited breast cancer may develop cancer earlier than their mothers did. While this may seem like a bad thing, knowing this information can save lives—if breast cancer runs in a family, daughters should be tested earlier than their mothers were. Plus, knowing long telomeres may be our fountain of health or youth gives us direction in the investigation into how to keep humans healthier. 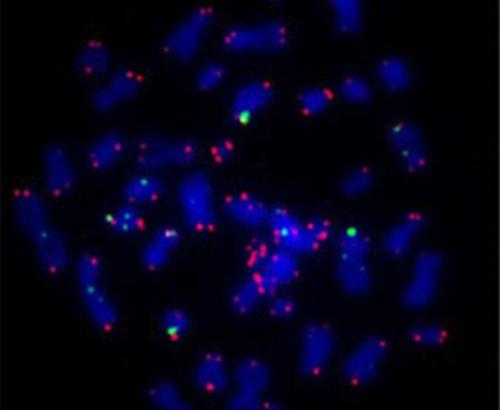 Using a microscope, scientists can look at a cell's chromosomes that are stained using a special dye (blue). Also seen in the picture are telomeres at the ends of the chromosomes (red).
Genetic Anticipation is Associated with Telomere Shortening in Hereditary Breast Cancer
Learn how to read a scientific article

Are Telomeres the Source of Youth? | Ask A Biologist
Skip to main content