Fish Out of Water

We all know that fish have fins and tails, but how close are those to your own arms and legs? Some fish like mudskippers can flap their fins to travel across solid ground and mud puddles, but most fish just use theirs for swimming. Although most fish can’t walk on land, scientists do believe that fish are the ancestors of land animals. In the PLOS Biology article, “Development and Evolution of the Muscles of the Pelvic Fin,” scientists discuss how over time, the muscles of ocean creatures were modified to let some animals walk on land.

Mudskippers use their powerful front fins to move across land.

Before we can understand how these muscles changed, we need to understand the different ways land animals and ocean animals move. If you have ever seen a fish swim, you probably noticed that the front two fins and the tail fin move a lot. You can think of the two front fins like fish arms and the tail fin like fish legs.

The front two fins are called pectoral fins and are sort of like the arms. A fish’s tail fin is called the caudal fin, and is like a fish’s hips and legs. While fish in water mainly use pectoral fins for side-to-side or up-and-down movement and move forward using the caudal fin, this changes for fish out of water.

Think of your own body. Because you walk standing up, almost half of your body is hips and legs. But if you look at a fish, its “legs” are just a tiny bit of tail. If you were a fish that tried to walk on land, you would have to pull yourself forward with the big muscles in your arms and chest. The muscles in your fishy hips and legs would be much too small and weak to move your forward. 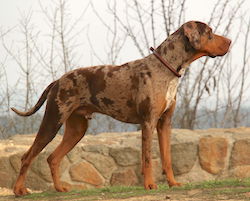 Dogs and most other land animals walk by pushing themselves forward with their arms. Image by Richárd Bolyós.

If you look at animals that walk on land, like dogs and cats, you will see that they do not move by pulling themselves forward with their arms. Land animals mostly push themselves forward with their back legs. For your dog to walk, it needs to have lots of leg muscle, but less muscle in their arms and chest. That is very different from the muscles needed for fish to move on land.

From Water to Land

Now that you know how fish move, we can talk about how land-walking critters may have evolved from fish-like ocean dwellers. You may have heard of evolution, or natural selection. It is the idea that some creatures with traits that help them survive live to pass those traits on to their babies. Over many, many generations, those traits make that type of creature distinct from what it used to be.

One important idea in evolution is that creatures from the oceans slowly evolved to live and walk on land. Fish have different muscles and bone structure than land animals, so the evolution of fish would have required the change of many different kinds of body parts. One way scientists examine these evolutionary changes is by looking at fossils, like the dinosaurs you see in museums. Fossils are an ancient record of creatures that lived on earth hundreds of thousands of years ago. But most fossils are only the hardened skeletons of creatures. Because muscles and other softer parts of animals do not usually become fossils, scientists run into problems when trying to learn about muscle evolution. Instead of looking at fossils, they have to use creative ways to figure out muscle evolution. 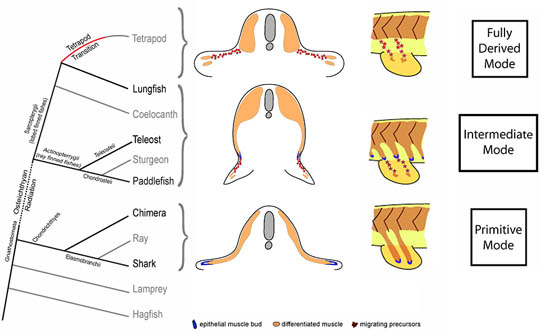 Glow in the Dark Fish

To see how fish muscles may have evolved, scientists conducted an experiment with several species of fish, including paddlefish, zebrafish, and lungfish (a type of fish that has lungs and breathes air). They also wanted to see if sharks had different muscle development, because shark skeletons are made of flexible cartilage instead of hard bones.

First, scientists used fish embryos, or developing baby fish, that had been bred to have special proteins in their muscles that shine red and green under special light. By taking tissue that forms the pectoral muscles from the red and green shining fish and replacing that same muscle in a fish that only shines green, the researchers could tell whether or not the replaced tissue would end up creating the pectoral muscles. 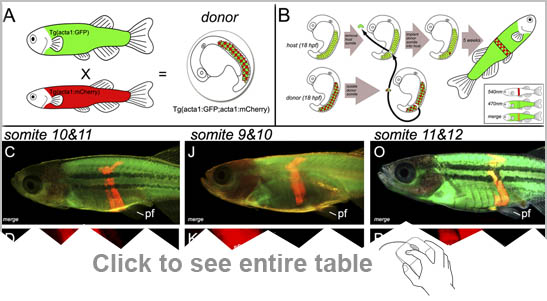 There are many images in this picture, but focus on the glowing fish in the middle. You can clearly see the glowing red muscles that scientists put in the neon green fish.

The scientists used this technique in sharks, swimming bony fish, and fish that can walk on land, to see how the development of the muscle changed among different species. These species represent different stages of moving from the sea onto land, giving the scientists a good guess about how the muscles of fish changed as they evolved to walk on land. The scientists were also able to test which parts of the tissue in the embryo were needed for the fins to develop properly.

When scientists looked at how the fin muscles grew, they found that bony fish like zebrafish and lungfish grew differently than sharks. The cells that made up the muscles in the bony fish grew in a way that was a middle step between muscle development in sharks and in some land animals. That similarity is very important when trying to figure out how animals evolved, as it supports the idea that land animals evolved from fish.

By examining the differences in how fish muscles grow, scientists have a better understanding of how species evolved to live on land over many hundreds of thousands of years. 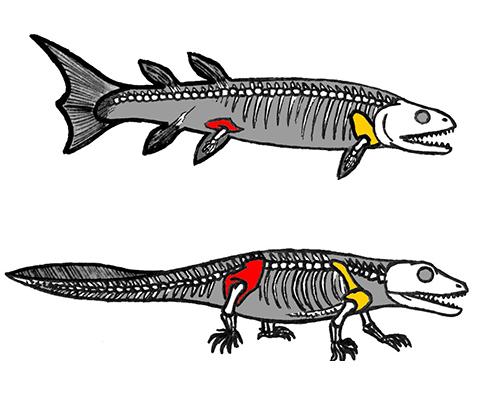 The highlighted areas show an example of how the same skeletal structures may have evolved for use in fish or land animals.
Development and Evolution of the Muscles of the Pelvic Fin
Learn how to read a scientific article