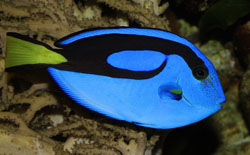 Dory from the film "Finding Nemo" is a blue tang.

“Just keep swimming, just keep swimming.” Dory, the forgetful fish in Disney’s “Finding Nemo” sings this song, and it’s one that all ocean creatures live by. As the number of people on Earth increases, it becomes harder and harder for our underwater friends to keep on swimming. Some types of fish in the ocean are starting to go extinct, which means they’re disappearing forever. Naturally, scientists are concerned about what is causing this fishy vanishing act. In the PLOS Biology article, “Global Human Footprint on the Linkage between Biodiversity and Ecosystem Functioning in Reef Fishes,” scientists tried to figure out what impact humans have on ocean habitats. 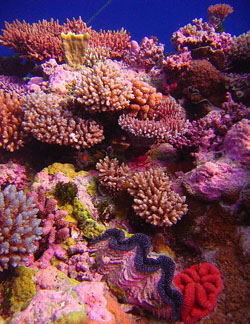 A coral reef like this one is filled with many different types of species.

To see how people are impacting ocean habitats, scientists needed to look at something called biodiversity. Biodiversity is how many different types of animals, plants, and all other living things happen to live in one area. Think of the school scene in Finding Nemo, where Nemo and his dad Marlin first see all of the neighborhood kids playing. There is a sting ray teacher, a pink squid, a seahorse, so many sea cucumbers, and seaweeds. All of those creatures living in one area would be the biodiversity of Nemo’s neighborhood. Scientists measure biodiversity across different areas of ocean and coral reef to determine how well the community functions as a whole.

The Effect of Biodiversity 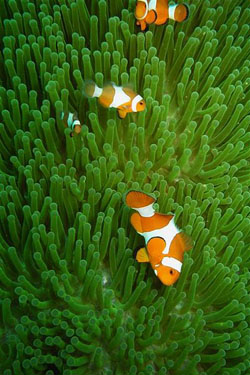 Clown fish live in the sea anenomes found in coral reefs, but what would happen if no anemones grew there?

In the study, scientists conducted many tests on many different areas of coral reef. They found that environments with high biodiversity, or lots of different types of fishy neighbors, were much healthier than areas with much fewer species living together. So it doesn’t just matter how many animals live in a place, but how many different types of animals live in a place. That includes plants, fish, shrimp, coral, and all other sea creatures in a certain ocean neighborhood. But what is it that makes some areas have a larger variety of species than others?

For one, areas where there are multiple species will develop different relationships to one another, which will result in prey and predator behavior. In “Finding Nemo,” this is similar to how Bruce and his other shark friends are hungry and decide that Dory and Marlin look like a good snack. Dory and Marlin are the prey to the shark predators. This behavior can cause both species to adapt so that they are more successful at either catching their prey or escaping the predator. Over time the process can result in new species, creating more diversity and leading to a more efficient coral reef community.

“Fish are friends.” We should follow both Bruce the Shark and Dory’s motto if we want to help the coral reef systems survive. Fish are friends and every species of fish and sea life matters when it comes to a better functioning coral reef community. This means that humans have to do their part to be conscious of their underwater friends. As of right now, the increasing human population is using up large amounts of resources. This causes things like pollution to invade these fragile ecosystems. Humans are also doing things like fishing and building on land near the reefs, both of which are also leading to a decrease in the amount of sea creature species. 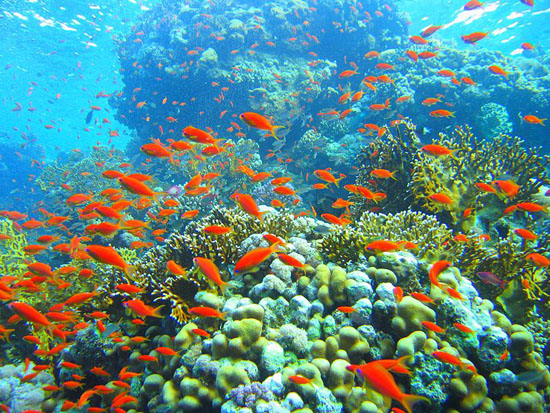 A healthy coral reef will be filled with many species of fish and plants.

Overall, coral reef communities are very complex and losing just one type of fish due to human activities can set off a chain of reactions that may negatively affect the whole functioning process of the ecosystem. Therefore, these coral reef systems need to be protected by rules placed upon us humans, such as restricted fishing areas and less fossil fuel emissions, so that we can do our part to help our underwater friends “just keep swimming.” 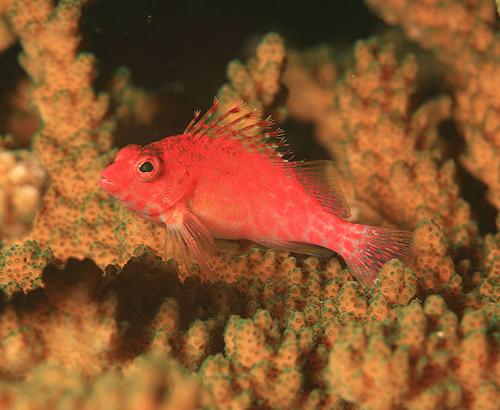 Coral reefs provide a home for many different species of sea creatures, and the coral is even alive, too. Here a Coral Hawkfish takes a break in reef off the coast of Panama.