Foraging in the City

Giving Up Density (GUD): a measure of how much an animal eats in a food patch. Scientists use GUD to measure foraging behavior and preferences in different habitats. If high quality food is plentiful and the animal feels safe from predators, it will have a higher GUD (eat less) because it can find and prefers the food in the surrounding environment. If the animal eats more from the food patch, it has a lower GUD indicating it prefers the food patch more than the surrounding environment.

Mesic: a moist environment. Mesic yards often have grass and leafy plants that require a lot of water to survive.

What do you think of when someone uses the word "nature?" Is it mountains and long winding valleys? Maybe you think of deserts or thick green rainforests. You might also include a colorful collection of plants and animals. A lot of people think the same way. They think you have to leave the city or town to find nature.

Actually, nature is just outside your door. Take a look around where you live. How many different plants do you see in the park, your yard and your neighbor or friend’s yard? How many different birds can you find? What are the birds eating? 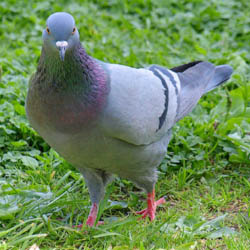 Rock pigeons (Columba livia) are commonly found in urban areas. These birds are well adapted to live near people and make cities their home.

You can learn a lot about nature and the environment by exploring the diverse plants and wildlife just outside your door and around the corner. Scientists are doing just that to learn more about birds and their eating behavior in cities. In the PLOS ONE article, “Linking Foraging Decisions to Residential Yard Composition,” scientists explore how different yards attract different bird species and affect birds' eating decisions.

Cities are popular places to live and they offer endless eating options – for both people and birds. Count the number of bird feeders in your neighborhood or birds eating from the ground or plants. Just like humans choose from a number of grocery stores and restaurants to find the best food, birds have an endless variety of yards, parks, and gardens around the city to choose where to eat.

Birds spend a good deal of time foraging – or looking for food. Whether a bird lives in the city or outside the city in the surrounding native environment, birds carefully choose the best places to eat based on the amount and quality of food available. Birds also need a safe place to forage and avoid predators. City birds have to watch out for the neighborhood cats.

Urban ecologists are interested in how city life affects birds and their eating habits. Do all city birds eat the same foods and share similar eating behaviors? Are different birds particular about where and what they eat, even with so many options? Dr. Susannah Lerman and her research team explored this question. They asked if different landscaping in front and back yards of peoples’ homes would attract different birds or change their foraging habits.

The scientists chose Phoenix, Arizona for their study. Phoenix is the fifth largest city in the United States. It is located in the Sonoran Desert where summer temperatures can be hot enough to fry an egg on the sidewalk, and it can freeze in the winter. There are two common yard types in this desert city. Some yards have grassy lawns with lush trees, shrubs and flowers that require a lot of water.  These yards are called mesic yards. Other yards look more like the native desert with desert plants, rocks and no grass. These yards are called xeric (“xeri” means dry) yards. Dr. Lerman’s team designed an experiment with mesic and xeric yards in Phoenix to study if Phoenix birds prefer eating in desert-like, xeric yards or grassy mesic yards.

The researchers set out trays of birdseed in 10 mesic yards and 10 xeric yards along with cameras to film each tray of food for a full day. The team counted the bird species that visited each tray, how long the birds stayed, and how much seed the birds ate. In addition, the team used a special measure called “Giving-up Density” (GUD) to compare birds’ foraging behavior in each yard.

Giving-up Density (GUD) is measured by the food left in the tray after a bird stops foraging there. Low GUD means more food was eaten and little left behind in the seed tray. High GUD means little was eaten from the tray and more food was left behind. The researchers expected a higher GUD (less food eaten from the tray) when the bird can find other high quality food in the same yard.  A high GUD suggest the birds prefer eating in that yard.  If the bird can’t find high quality food in the yard, they will eat more from the tray and have a lower GUD.

By measuring how long birds stayed at each seed tray and how much food they ate, the researchers determined if birds preferred grassy yards more than xeric yards, or vice versa. Remember, if the bird ate less from the seed trays (higher GUD), it’s probably because that bird could easily find high quality food in the yard. This suggests they preferred eating in that yard. 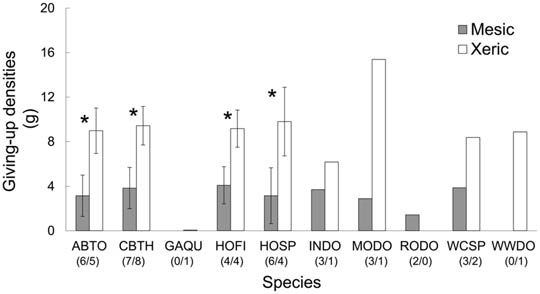 This figure is from Dr. Lerman's PLOS article. This figure shows the Giving-up Density (GUD) of different bird species in mesic and xeric yards. Click on the figure for the full story.

Learning about birds’ preferences and eating habits is important for bird conservation in cities. While grassy yards are nice for playing, some birds prefer yards that look more like the natural habitat outside of the city. People can help with bird conservation by designing yard habitats like the area surrounding their city to attract and support native birds.

Elizabeth Cook. (2013, May 06). Foraging in the City. ASU - Ask A Biologist. Retrieved December 8, 2022 from https://askabiologist.asu.edu/plosable/foraging-urban-birds

Elizabeth Cook. "Foraging in the City". ASU - Ask A Biologist. 06 May, 2013. https://askabiologist.asu.edu/plosable/foraging-urban-birds 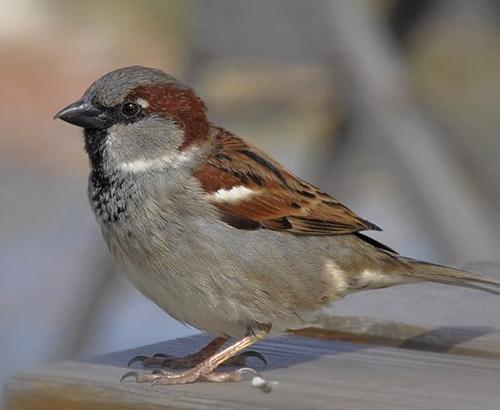 Urban birds, like this house sparrow, are adapted to finding food all over the city. In this article, scientists are learning about where urban birds prefer to eat.

Learn how to be a birder and identify the birds in your own neighborhood.