Always Judge a Grouse by its Cover

Comb: a fleshy crest or outgrowth on the head of some birds; roosters have red combs.

Parasite load: the number of parasites living in a host organism.

Signal: an act or event that sends information to someone or something.

Testosterone: a hormone involved in the development of male secondary sex characteristics (such as facial hair in humans).

Imagine that you see a book with a catchy title and colourful pictures. Naturally, you would be intrigued and want to read it because it has an interesting cover. Sometimes the cover is honest and the book turns out to be a great read. Other times the cover tricks us and the book is boring. We’ve all heard of the saying “don’t judge a book by its cover” and for humans it’s generally a good rule to follow. Some animals, such as the Chinese Grouse, should not follow this rule because for them judging a book by its cover might actually be the right thing to do. 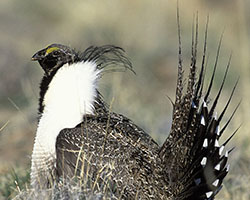 The Bigger and Brighter, the Better

When we think of ornaments we picture colorful glass balls hanging from a Christmas tree. Sexual ornamentation in animals is very similar. Animal ornaments are characteristics of an animal’s appearance and come in many shapes, sizes and colors—just like Christmas ornaments. In birds, they include things like colorful feathers or long tails. What makes these ornaments sexual is that they are used to attract members of the opposite sex. 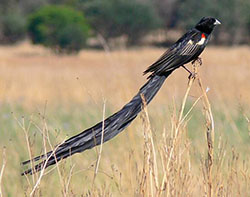 For animals, ornamentation may be long or colorful feathers. Click for more detail.

Have you ever wondered what that red thing is on a rooster’s head? It’s called a comb and grouse have it too. It’s an ornament around their eyes. Scientists tried to figure out if comb size and color are honest signals of better male quality in the Chinese Grouse.

They found that female birds did in fact choose males with larger and redder combs. The grouse that was not chosen by a female had smaller and light red combs. This proves that female Chinese Grouse can’t resist the charm of males with bigger and brighter ornaments. The question is are these ornaments honest in telling the female if the male is healthy or are they just a trick to get a date with a pretty lady?

Comparing red combs between unmated (left - a) and mated (right - b) males. Click for more detail.

Generally, the flashier the ornaments are, the healthier the male. This is because it takes energy to grow big ornaments. Acting healthy also takes energy. So, a male with a big ornament has enough energy to look handsome and have a strong immune system at the same time. It’s kind of like having the ability to do two things at once. For instance, imagine being able to do your homework and watch TV at the exact same time. That is some serious talent.

Scientists compared mated and unmated male grouse at the Lianhuashan Natural Reserve in central China. They captured 35 male and 13 female Chinese grouse. Then, scientists measured many things, including the blood testosterone levels and color and size of the red comb, in males that mated and males that didn’t mate. 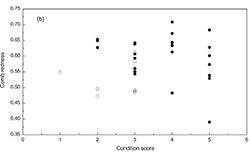 A graph that shows the relationship between comb redness and condition score of mated and unmated males. Click for more detail.

Males who mated had redder and larger combs than males who didn’t mate. The scientists also found that the average testosterone concentration in mated males was higher than in unmated males. These males also had better body condition. This is because testosterone is a hormone that helps the development of male secondary sexual features. The more testosterone a male Chinese grouse has, the better ornaments he will have and the more attractive he will be to a female grouse.

Scientists wanted to measure the parasite load in the Chinese grouse to determine if there were fewer parasites in the males who mated. Fewer parasites in the males who mated would indicate that they were indeed healthier and better able to fight off infection. To measure the parasite load, scientists dissected a dead Chinese grouse and found that concentrations of parasite eggs in the bird's feces gave an accurate estimate of the number of worms in each grouse. So the scientists used fecal egg counts to determine parasite load.

They found that males who mated had a lower parasite load than males who did not mate. This finding is a bit odd, as testosterone can lower immune function. However, the molecules needed to make the large red combs may help stimulate the immune system, helping to make these males healthier overall. This suggests that comb size and color are honest signals of better male quality in the Chinese Grouse. 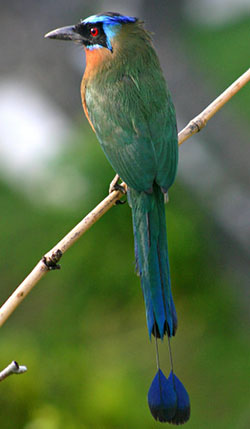 The length of the tail feathers in male blue-crowned motmots is thought to be a signal for females. Image by Stephen Turner.

We may think that judging other people based on how they look is vain and shallow but for many birds, including the Chinese Grouse, sexual ornaments are a way for females to pick the best and healthiest males. Bigger and redder combs are honest signals of male quality in the Chinese Grouse.

Although some birds can be judged by their appearance, looks can be deceiving.  Not everything that looks pretty is going to be a good choice and some things that don’t look good can turn out to be great. So as a general rule, it is important to find out what is inside a book, a person, or a new food before you decide if you like it or not. 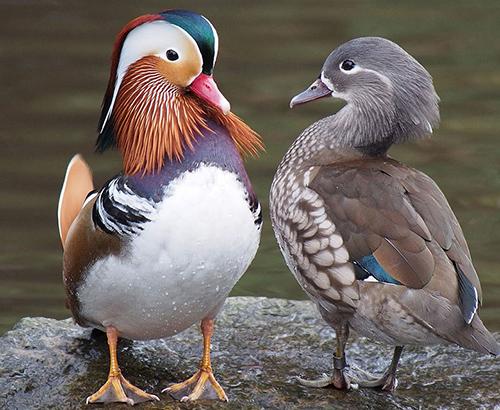 In many species of bird, like the Mandarin duck, males have bright ornaments to try to gain mates, while females lack bright colors, to help them avoid attracting predators. Here, the drab female is on the right.
Is Sexual Ornamentation an Honest Signal of Male Quality in the Chinese Grouse (Tetrastes sewerzowi)?
Learn how to read a scientific article