Feeding the Beast: How Germs Eat for You

Gastrointestinal tract: the anatomical region between the stomach and anus that is the main region of nutrient absorption in the body.

Gut epithelium: a layer of human cells lining the inside of the gastrointestinal tract.

Microbiota: the many species of bacteria that live inside the human body.

Symbiosis: a relationship between two different organisms that can be, but is not always helpful for both organisms... more

You've probably never seen someone licking a door handle or doorknob. Just the thought of it may make you want to say "yuck!" Doorknobs can be touched by a lot of people each day. Because of this, they have many germs covering them. Running your tongue across their surface just about guarantees you will get sick.

But why? What could be living on those doorknobs? One thing might be bacteria. These microscopic, singe-celled organisms have a reputation for making people sick. 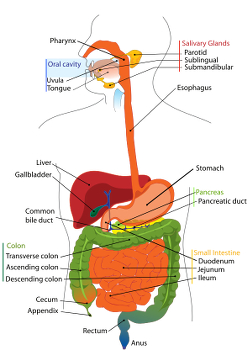 The human digestive system. Your gut, or gastrointestinal tract, includes the stomach, colon, small intestines, and rectum. Click on image to enlarge.

It turns out some bacteria are not as bad as people think. In the PLOS Biology article “The Evolution of Mutualism in Gut Microbiota Via Host Epithelial Selection,” scientists describe how your body can work with certain bacteria to help keep you healthy. This shows us that, if nothing else, not all bacteria are bad.

Around the world, people eat just about everything: from fruits to milk to bugs. You may think that your body does all of the work for you. Your teeth mash up the food, your stomach digests it, and your intestines absorb the nutrients. It may seem as straight forward as walking your dog down the street, but in reality it’s not. Scientists are discovering that if it weren’t for the help of bacteria living in your gut, there are many things that you wouldn’t be able to digest at all.

Your gut, also known as your gastrointestinal tract, is the tube in your body that carries food from your stomach to your intestines. Your gut is home to millions of species of bacteria. In fact, scientists estimate that there are 100 trillion bacterial cells in your body. That’s roughly ten times as many cells as the cells that make up your body. 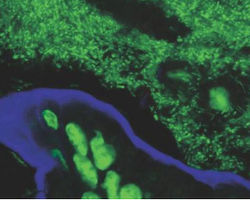 Bacteria growing in the gut of a lab mouse. Click the image for more information.

Those bacteria help your body to break down big food molecules into useable fuel. The bacteria also produce vitamins and help protect the body from diseases. The whole population of bacteria in our bodies is called the human microbiota.

The relationship between you and your gut bacteria is symbiotic. This means that both you and the bacteria benefit. Your bacteria receive a safe home and plenty to eat, and in return they help you break down food to get the nutrients that you need to survive and grow.

If there are so many bacteria in our bodies, what keeps them from turning against us? There are plenty of bacteria that eat our food and take up space without doing much for our bodies. Those bad bacteria are not usually harmful, but they do compete with the good bacteria for nutrients and room to grow. 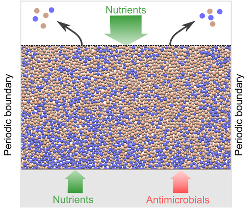 A layer of good and bad bacteria grow on the inner lining (epithelium) of your gut. Click the image for more information.

It’s difficult to watch what’s going on inside of our guts. It can also be hard to do experiments like this on humans. Because of this, scientists decided to use a computer to create a bunch of virtual guts filled with virtual bacteria, kind of like characters in a computer game. 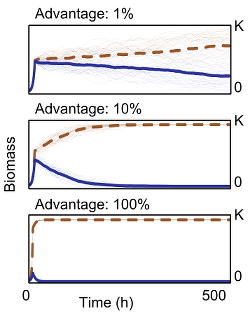 The researchers' simulations showed that even a small advantage helped the good bacteria to out-compete the bad bacteria. Click the image for more information.

Not all bacteria are bad for you. In fact, the bacteria in your body help keep you healthy and strong. Scientists are excited to learn more about our helpful bacteria, and how to help them win battles against bad bacteria.

Nicholas Jakob. (2014, April 22). Feeding the Beast: How Germs Eat for You . ASU - Ask A Biologist. Retrieved January 14, 2022 from https://askabiologist.asu.edu/plosable/gut-microbiota

Nicholas Jakob. "Feeding the Beast: How Germs Eat for You ". ASU - Ask A Biologist. 22 April, 2014. https://askabiologist.asu.edu/plosable/gut-microbiota 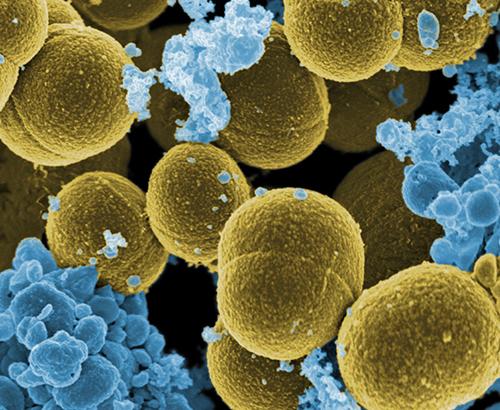 Not all bacteria are bad! Some bacteria help you digest your food and keep your body healthy.
The Evolution of Mutualism in Gut Microbiota Via Host Epithelial Selection
Learn how to read a scientific article