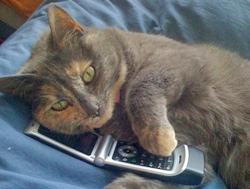 Scientists are learning why cats can't tell who is on the phone, but humans are masters at matching voices to faces.

You have probably seen toddlers talking to their moms on the phone before. Even though they can't see their moms, little kids' faces light up as they recognize the voice of someone important. Usually toddlers are very “hands-on,” and need to touch and see things in the real world to understand them. So how do they recognize mom's voice without actually seeing her face?

Scientists are curious how this happens, not just for little kids but for everyone.  How do we know who we are talking to on the phone when we can only hear a voice? In the PLOS Biology article, “Implicit Multisensory Associations Influence Voice Recognition,” scientists examine how our brains connect a person’s face and that person's voice. 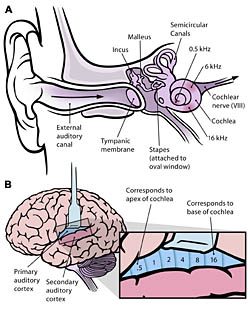 Sound enters the ear and is processed deep within the brain. This image shows that very complicated process. Click image to open larger version. Wikimedia Commons- Chittka L. and Brockmann A.

As you probably know, the brain is a complex organ that controls our entire body. But for now, let's focus on the parts of the brain that help us recognize people’s voices and faces.

What makes the connection between sight and hearing so strong is the fact that both senses give similar information about a person. For example, a girl’s voice sounds different than a boy’s voice and their faces have different features as well. Using this idea in our example of the boy on the phone, when he hears his mom’s voice on the phone, the auditory part of his brain tells the visual part of his brain to turn on too, so the child can both “see” and hear mom.

Are You My Mommy? 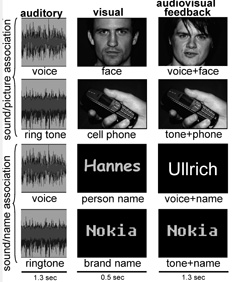 Scientists divided volunteers into two groups. One group matched faces with voices. The other group focused on names and voices. Click image to see larger version from article.

To see how a little boy could recognize his mom’s voice over the phone, scientists conducted an experiment. They used a special technology called functional magnetic resonance imaging to see what parts of the brain were active during the study. They then collected two groups of people for the experiment. One group was exposed to pairs of voices and faces, similar to how the little boy on the telephone recognized his mom’s voice and face together. The other group was exposed to pairs of voices and names. 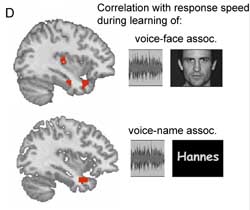 Remembering what they first heard and saw, each group had to take the jumbled results and try to match them back together. While they did this, scientists were closely observing brain activity. Individuals from both groups showed an increase in brain activity when matching the pairs back together. But the group members who were exposed to both faces and voices were much quicker to correctly match everything. The voice/face volunteers were also the only ones who showed an increase in brain activity in the facial recognition area of the brain. This shows that sight and hearing are very strongly connected.

Additional images via Wikimedia Commons. Woman on cellphone by Dgultekin. 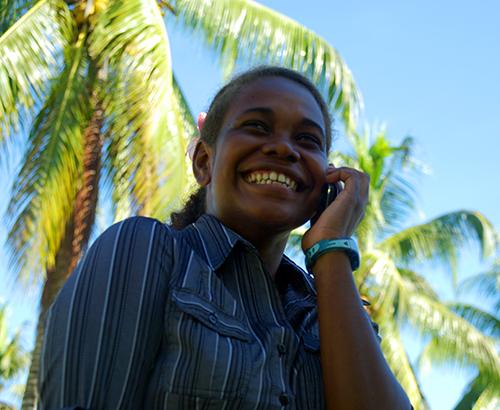 Sometimes you can tell who is on the phone just by hearing their voice.
Implicit Multisensory Associations Influence Voice Recognition
Learn how to read a scientific article