Cell colony: a mass or group of cells.

Holoclone: a type of stem cell colony that is able to grow and reproduce quickly and aggressively.

Meroclone: a type of stem cell colony that grows and reproduces at a slower pace than holoclone colonies.

Prostate: a gland that is a part of the male reproductive system. It aids in the production of semen.

Stem cell: cells that don't have a specific function yet and can become any cell type...more 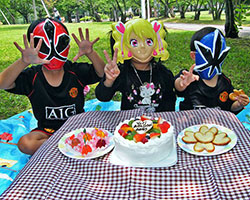 You wouldn't put a party mask on during class, would you? Cells also behave differently depending on their surroundings. Image by Emran Kassim.

It's near the end of class, and you've been sitting still for what seems like ages. You are listening to your teacher, and you haven't been talking, passing notes, or making funny faces. It's good to follow the rules in class, but would you act the same way at a birthday party? No way. At the birthday party, you probably talk, run around, and make all kinds of funny faces.

Your environment affects how you behave. This is also true for your cells. Cells determine their behavior using their surroundings, which is why the same cell may act differently based on the type of environment in which it is found.

But this isn't just for cells that work to keep your body healthy. Cancer cell colonies may also act differently depending on their surroundings, such as what other cells are around them.

When most people think of cancer, all they know is that it is a dangerous disease. They usually don’t know much more about it. But understanding how cancer grows and spreads is important for helping to keep people healthy. In the PLOS ONE article, “Clonogenicity: Holoclones and Meroclones Contain Stem Cells,” scientists studied how different cell colony types can affect the growth and spread of cancer.

What Does Cancer Have to Do with Stem Cells? 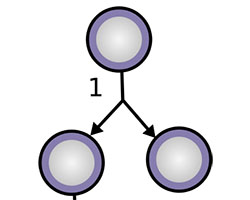 There are trillions of cells within the human body that each have a specific job, like making up your muscles or skin. After they serve their purpose they do not live very long before new cells replace them. But your body also has very special different types of cells called stem cells. These cells have a very long cell life, and continue to divide and create new stem cells for as long as you are alive.

Normally, the ability of some cells to live for a long time and reproduce is a good thing and helps to keep your body healthy. However, in some cases it may not be. For example, some types of cancer cells behave very much like stem cells. Cancer describes a wide variety of diseases that all involve the abnormal growth of cells. 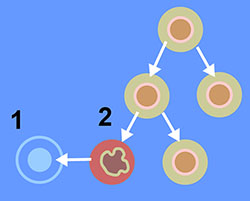 Normally if a cell mutates, the body will kill it. But when that doesn't happen, cancerous tumors can form. Click for more detail.

The ability for cancer cells to keep dividing makes it difficult for a sick individual to get rid of the cancer in his or her body. Many tumors are believed to contain cancer stem cells - stem cells that are able to give rise to more cancerous cells. Many scientists believe that in order to find a cure for cancer we must understand how to stop the cancer stem cells. In this experiment, scientists set out to understand how different cell colony types can affect the rates of growth of cancerous cell colonies.

Scientists began the experiment by obtaining some cancerous cells from a human prostate. Single cancer cells were placed in environments that would allow them to grow. These cells grew to form colonies of two types: either holoclones or meroclones. These are specific types of cell colonies that contain stem cells.

Scientists then monitored the growth of new cells in each of these cell colony types. By monitoring the number and type of cells that formed and how fast they grew, scientists were able to determine how cancer cell reproduction may depend on the type of cancer cell colony that is growing. 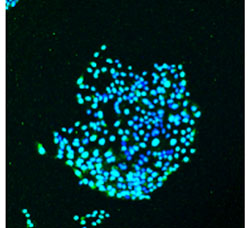 In this experiment scientists noticed that when holoclones divided to create new cells, most of the resulting cell colonies were holoclones, as expected. Holoclones are very fast-growing colonies, as they are creating more and more holoclones all the time.

But when scientists looked at growth in the meroclone colonies that had cancer cells, they found that the meroclones gave rise to both holoclones and meroclones. This meant that meroclones are capable of producing holoclones, even though this was previously thought to be impossible.

The final part of the experiment was performed using mice, to learn if the differences in these cell colonies would affect tumor growth in animals. Holoclone and meroclone cell colonies were injected into male mice. Scientists then observed these mice to monitor any tumors that grew as a result of the injection. Five weeks after injecting the mice, any tumors present were removed to be further studied. 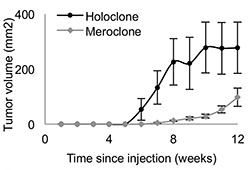 This graph shows the difference in tumor sizes in the mice injected with holoclone or meroclone cells. Click for more detail.

For example, after being diagnosed with cancer, most people receive treatment to kill the cancer cells. However, in many people the cancer cells will return. Some scientists believe this is because there are cancer stem cells in tumors that are hard to kill. If these cancer stem cells are not killed, they can regrow and result in a whole new tumor.

Experiments like this one, which study stem cell behavior in cancer cells, are important for understanding how to design new treatments that can target cancer stem cells, and prevent the cancer from coming back. 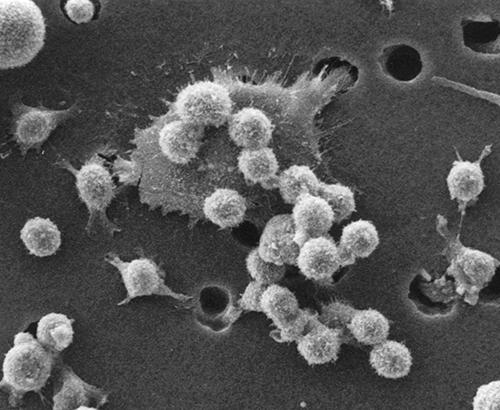 When we think of cancer, we often think in simple terms: seek and destroy. But it turns out cancer cells can be much more complex. They can grow differently based on their surroundings.